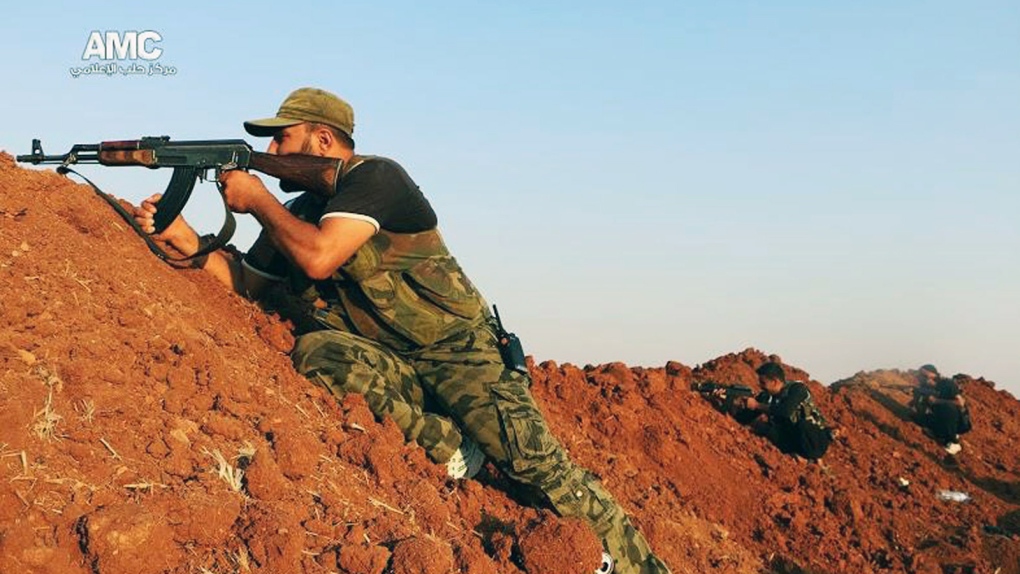 A photo provided by the anti-government activist group Aleppo Media Center (AMC), which has been authenticated based on its contents and other AP reporting, shows a Free Syrian Army fighter aiming his weapon during a battle with Islamic State militants in Aleppo, Syria, Sunday, Aug. 17, 2014. (AP / Aleppo Media Center AMC)

BEIRUT -- Lebanese Hezbollah fighters have killed a senior member of the Islamic State group who was known to be one of their top explosives experts in an operation inside Syria, activists said Tuesday.

The Syrian Observatory for Human Rights said the man known as Abu Abdullah al-Iraqi was killed by a bomb planted in his car in Syria's rugged Qalamoun region along the border with Lebanon. Three other Islamic State militants died in an ensuing clash with Hezbollah fighters, according to the group.

Hezbollah's Al-Manar TV reported al-Iraqi's death but said he was killed in a "qualitative" operation carried out by the Syrian army in Qalamoun. It said he was in charge of rigging cars with explosives and preparing suicide bombers which he sent to Lebanon to carry out attacks.

Hezbollah is a Shiite group and longtime staunch ally of the Syrian government. It has been heavily involved in fighting alongside President Bashar Assad's forces in Syria, particularly along the Lebanese-Syrian border, battling the overwhelmingly Sunni rebels seeking to overthrow him.

The group typically does not claim responsibility for operations inside Syrian territory.

In April, the group placed a powerful bomb in a two-story villa in Syria's western Qalamoun region, detonating it as three rebel explosive experts and four assistants met inside, turning the villa into rubble in seconds.

Also Tuesday, the organization charged with overseeing the destruction of Syria's chemical weapons program said the most crucial part of its operation has been completed.

The Organization for the Prohibition for Chemical Weapons said that an operation carried out aboard the U.S. vessel Cape Ray had destroyed 581 metric tons of a precursor for sarin nerve gas, and 19.8 metric tons of mustard gas. The toxicity of the chemicals was reduced by 99.9 per cent by a hydrolysis technique aboard the ship, and the resulting liquid will now be transported to Finland and Germany for final disposal.

OPCW experts ensured that none of the chemicals escaped into the sea, the agency's director-general Ahmet Uzumcu said in a statement.