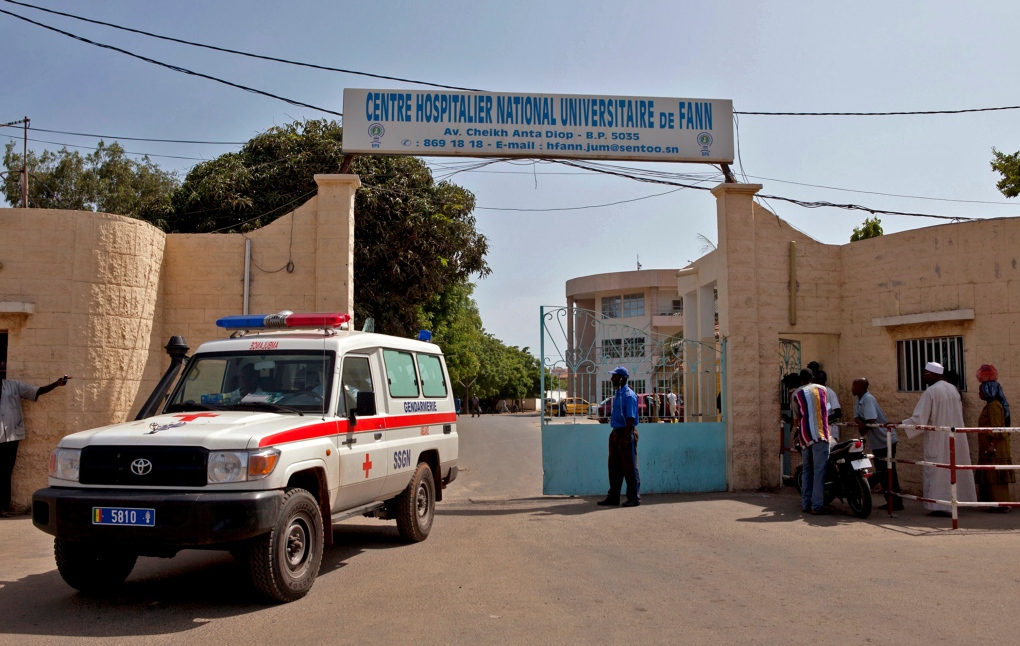 A ambulance leaves the University Hospital Fann, where a man is being treated for symptoms of the Ebola virus in Dakar, Senegal on Friday, Aug. 29, 2014. (AP / Jane Hahn)

DAKAR, Senegal -- Senegalese authorities on Monday were monitoring everyone who was in contact with a student infected with Ebola who crossed into the country, and who has lost three family members to the disease.

An Ebola outbreak in West Africa has killed more than 1,500 people in Guinea, Liberia, Sierra Leone and Nigeria. The university student is Senegal's first case of the dreaded disease.

The 21-year-old left Guinea on Aug. 15, just days after his brother died of the disease, according to Guinea's Health Ministry. It said that the brother apparently caught Ebola in Sierra Leone.

The student travelled by road, crossing into Senegal despite a border closure. He arrived in Dakar, the Senegalese capital, on Aug. 20, according to the World Health Organization, and was staying with relatives on the outskirts of the city. The agency said that on Aug. 23, he went to a medical facility seeking treatment for fever, diarrhea and vomiting -- all symptoms of Ebola but also many other diseases.

But he concealed from doctors that he had had contact with infected people. He was treated instead for malaria and continued to stay with his relatives before turning up at a Dakar hospital on Aug. 26.

Senegal's Health Ministry said Sunday that it has since traced everyone the student came into contact with, and they are being examined twice a day.

President Macky Sall said Monday that everything is being done to prevent any further cases of the disease in Senegal, including public awareness campaigns and television programs aimed at encouraging good hygiene practices, like regularl hand-washing.

The Health Ministry in Guinea, meanwhile, said that since the young man left home, his mother and a sister have died of the disease, and two other brothers are being treated for it.

The arrival of the disease in Senegal, a tourist and transport hub, has raised fears that the disease could spread even farther afield.

But public health experts have said that shutting borders and banning flights are not the answer.

"Countries might try to restrict travel in order to protect themselves, and it will do the opposite," said Tom Frieden, director of the U.S. Centers for Disease and Control, during a visit to the airport in Conakry, Guinea, on Monday. "If we cut off these countries, we will interfere with our ability to support them and stop the outbreak and that will actually increase the risk to the rest of the world."

The World Health Organization says up to 20,000 people may contract the virus and it could take at least six months to bring it under control.

On Monday, Liberia's president ordered most civil servants to stay home another month in an effort to stop the disease's spread.

President Ellen Johnson Sirleaf ordered non-essential workers not to come to work and promised that all government workers would still be paid. Liberia's schools are also closed.