Secret memo on drone strikes against U.S. citizens abroad may be released 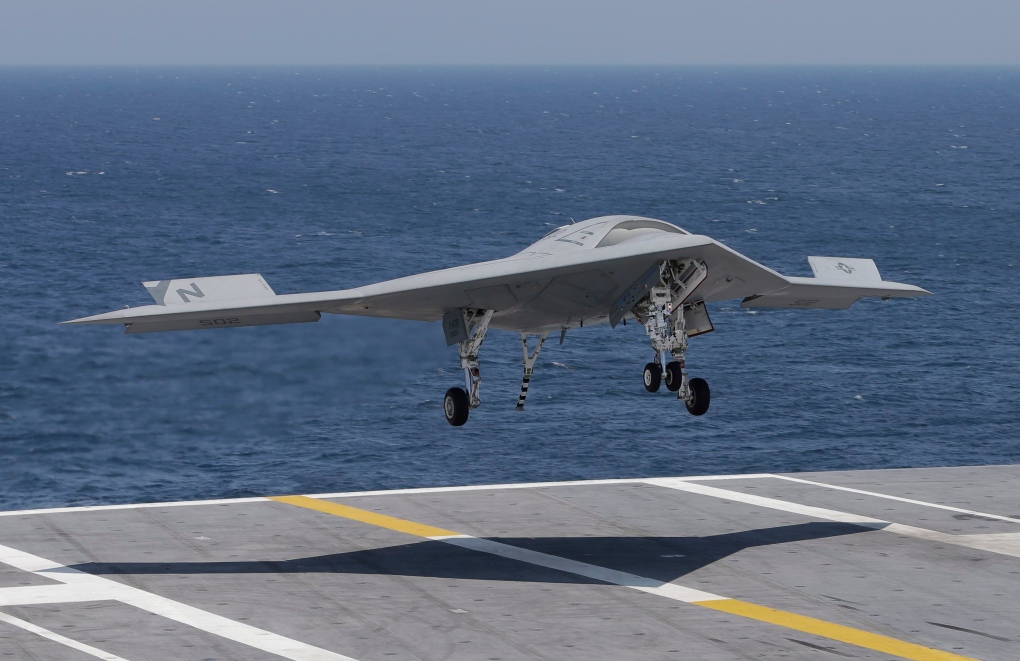 A X47-B Navy drone approaches the deck as it lands aboard the nuclear aircraft carrier USS George H. W. Bush off the Coast of Virginia Wednesday, July 10, 2013. (AP / Steve Helber)

WASHINGTON -- The Obama administration signalled Tuesday that it will publicly reveal a secret memo describing its legal justification for using drones to kill U.S. citizens suspected of terrorism overseas. The move came on the eve of a critical U.S. Senate vote and under court order.

Two administration officials told The Associated Press that the Justice Department has decided not to appeal a Court of Appeals ruling requiring disclosure of a redacted version of the memo under the Freedom of Information Act. The officials spoke on condition of anonymity because they were not authorized to speak publicly about the matter.

The decision to release the documents comes as the Senate is to vote Wednesday on advancing President Barack Obama's nomination of the memo's author, Harvard professor and former Justice Department official David Barron, to sit on the 1st U.S. Circuit Court of Appeals in Boston. Republican Sen. Rand Paul had vowed to fight Barron's confirmation, and some Democratic senators were calling for the memo's public release before a final vote.

Wednesday's expected procedural vote would allow the Senate to move ahead with a final vote on Barron on Thursday. "I think we'll be OK," Senate Majority Leader Harry Reid, D-Nevada, said earlier Tuesday.

Anwar al-Awlaki, an al-Qaida leader born in the United States, was killed after being targeted by a drone strike in Yemen in September 2011. Some legal scholars and human rights activists complained that it was illegal for the U.S. to kill American citizens away from the battlefield without a trial.

Some senators, including those in Obama's own party, have called for the public release of the memo before the final confirmation vote. The White House agreed under the pressure to show senators unredacted copies of all written legal advice written by Barron regarding the potential use of lethal force against U.S. citizens in counterterrorism operations.

Until now, the administration has fought in court to keep the writings from public view. But administration officials said that Solicitor General Donald Verrilli Jr. decided this week not appeal an April 21 ruling requiring disclosure by the 2nd U.S. Circuit Court of Appeals in New York and that Attorney General Eric Holder concurred with his opinion.

The release could take some time, since the redactions are subject to court approval. And the administration also is insisting that a classified ruling on the case also be redacted to protect information classified for national security, but not the legal reasoning, one of the officials said.

The American Civil Liberties Union and two reporters for The New York Times, Charlie Savage and Scott Shane, filed a Freedom of Information Act suit. In January 2013, U.S. District Court Judge Colleen McMahon ruled that she had no authority to order the documents disclosed, although she chided the Obama administration for refusing to release them.

But a three-judge appeals court panel noted that after McMahon ruled, senior government officials spoke about the subject. The panel rejected the government's claim that the court could not consider official disclosures made after McMahon's ruling, including a 16-page Justice Department white paper on the subject and public comments by Obama in May in which he acknowledged his role in the al-Awlaki killing, saying he had "authorized the strike that took him out."

The ACLU urged senators in a letter Tuesday not to move forward on the confirmation vote until they have a chance to see any Barron memos on the administration's drone program, not just those involving U.S. citizens.

Paul issued a statement Tuesday saying he still opposes Barron's nomination. "I rise today to say that there is no legal precedent for killing American citizens not directly involved in combat and that any nominee who rubber stamps and grants such power to a president is not worthy of being placed one step away from the Supreme Court," Paul said in remarks prepared for delivery on the Senate floor Wednesday provided by his office.

Democratic Sen. Ron Wyden has been pushing for public disclosure of Barron's writings and was one of several Democrats who had been refusing to say whether he'd vote for confirmation without it. "That's certainly very constructive," Wyden said when told of the decision not to appeal.

The administration's decision won over at least one senator, Democrat Mark Udall, who had been opposed to Barron because of the memo's secrecy. "This is a welcome development for government transparency and affirms that although the government does have the right to keep national security secrets, it does not get to have secret law," Udall said.