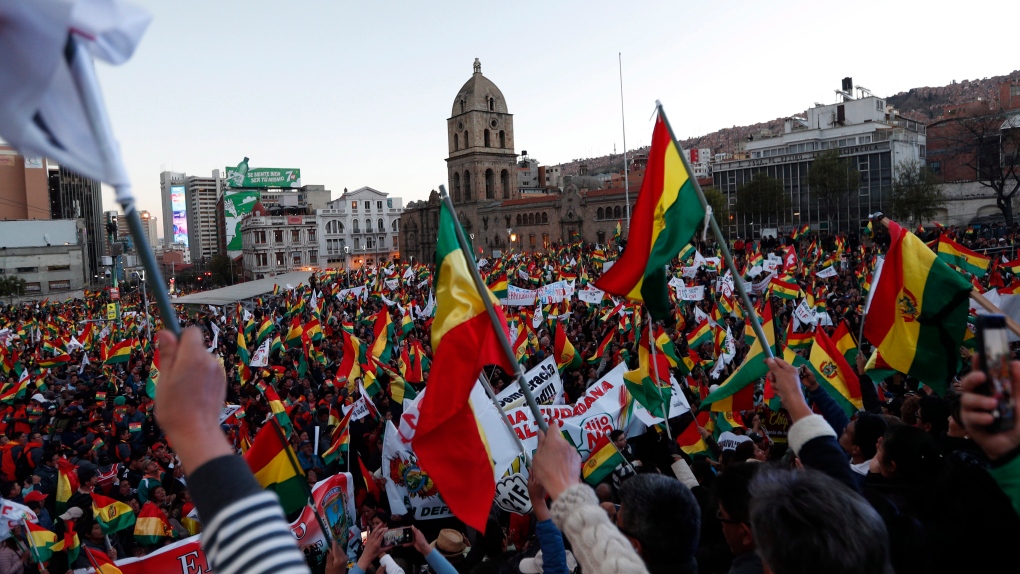 TORONTO -- A second wave of protests against Bolivia’s President Evo Morales flooded some of the country’s biggest cities Thursday, as thousands poured into the streets for a “cabildo,” or public demonstration.

Morales, who has been in power for 14 years, is facing a threat to his re-election on Oct. 20 over his perceived inaction on the wildfires that have decimated the Bolivian countryside.

A grassroots movement aided by civil rights groups have been calling for mass protests across the country, and for a “voto castigo” -- a protest vote -- against Morales to oust him from power after many consider his failed 2016 referendum bid turnover illegal and unconstitutional.

Thursday’s cabildo movement occurred in the cities of Cochabamba and La Paz, and attendance was estimated to be in the hundreds of thousands, further expanding the movement from a protest on Oct. 4 in Santa Cruz that human rights groups estimate 1 million people took part in.

Jhanisse Daca, founding member of Bolivian human rights and environmental activist group Standing Rivers, documented the cabildos on Twitter, telling CTVNews.ca in an email that the group is “so happy to see so many people mobilized.”

Daca says the movement is centred around renouncing Morale’s recent agricultural legislation aimed at upping production to expand exports to China, which environmental groups say directly contributed to the wildfires, and a call-to-action that Morales’s unprecedented run for a fourth term is in violation of the Bolivian constitution.

“We are focused on two things right now: fighting the fires and holding the government accountable,” Daca said.

#Cabildo: President of Santa Cruz Civic Committee speaks to the crowd and thanks them for the support during chiquitano fires catastrophe, emphasizes unity achieved in the country for our forests and democracy. #Bolivia #SOSBolivia pic.twitter.com/0M02ztS6Oj

#Cabildo: Meanwhile in Cochabamba Cabildo, crowds also gather by the thousands. This Cabildo also demands annulment of anti-environmental laws and resignation of Morales to his illegal candidacy. #Bolivia #SOSBolivia pic.twitter.com/Fof8DUmSQs

#Cabildo: images now surfacing of young protesters cleaning the streets after the Cabildos ended. I am so proud of us, again. Once more we have shown strength and unity. And a sustained defense of our environment. #Bolivia #SOSBolivia pic.twitter.com/O9W47ITDnP