Search on for humpback whale entangled in debris off Hawaii 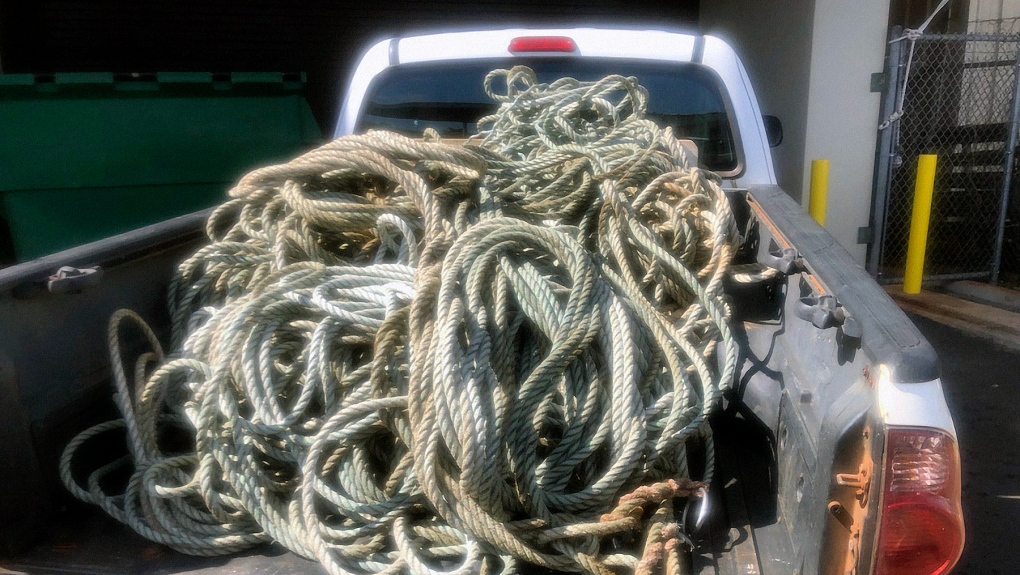 This Jan. 18, 2022 photo provided by the National Oceanic and Atmospheric Administration shows heavy-gauge line removed from a humpback whale in Lihue, Hawaii . A marine mammal rescue team is looking for an adult humpback whale entangled in debris off the coast of Hawaii. (Jamie Thomton/NOAA Fisheries via AP)
POIPU, Hawaii -

A marine mammal rescue team is looking for an adult humpback whale entangled in debris off the coast of Hawaii.

First responders removed about 600 metres of heavy-gauge line from the animal over the weekend when it was off the island of Kauai, The Garden Island newspaper reported. Authorities detached most of the gear but weren't able to get all of it off before the whale moved on.

Officials plan to try to find the whale and clear more line from it as conditions permit. They will study the removed gear to try to determine what it is and where it came from.

Large whales can become entangled in active or abandoned fishing gear or other ropes and lines in the ocean. The drag from debris can cause whales to use more energy to swim. It can also make it harder for them to feed, potentially leading to starvation. The debris can also injure the animals and trigger infections.

The entangled whale was emaciated, light-coloured and rough-skinned, the National Oceanic and Atmospheric Administration said. It had patches of rust-coloured whale lice, indicating it was distressed.

Graham Talaber, who lives in the community of Koloa on Kauai, noticed rope and a dark spot in the water while filming green sea turtles from with a drone-mounted camera on Sunday. After 10 to 15 minutes of hovering over the area, his worries were confirmed when he saw a humpback at the end of a big net.

"It's just right there, right in front of you, this massive, bus-size animal struggling for its life," Talaber said. He asked his father to alert NOAA.

The responder team attached a satellite telemetry buoy to the whale, which will self-release in about a week. The buoy signaled when the whale returned to Kauai waters on Wednesday but the team could not spot the whale.