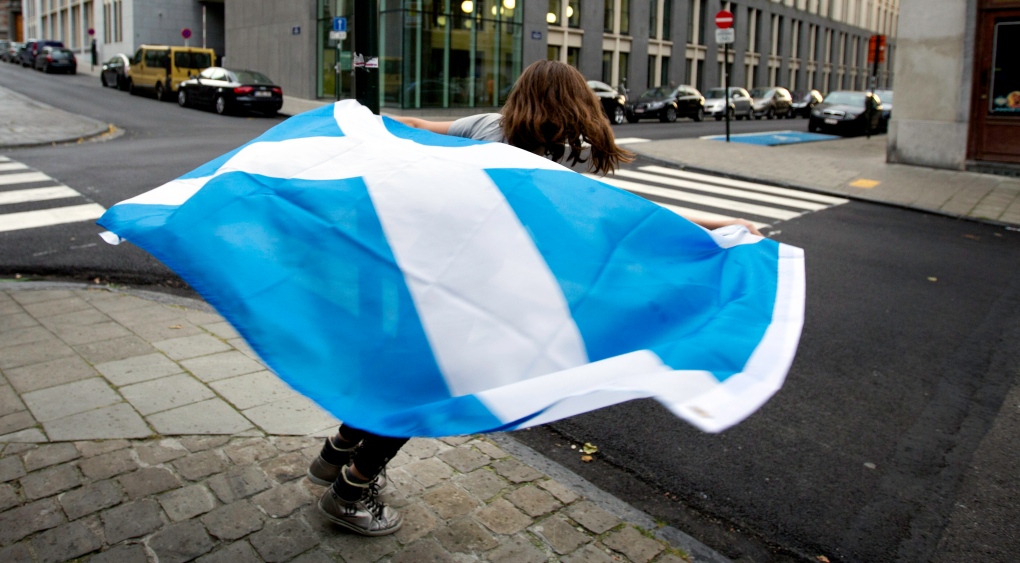 A young girl runs around a street pole with a Scottish national flag before taking part in a demonstration in favor of Scottish independence in Brussels on Thursday, Sept. 18, 2014. (AP / Virginia Mayo)

LONDON -- Scotland's leader said Monday that she hopes to hold an independence referendum as soon as next year, setting up a political showdown with a U.K. government that refuses to countenance another secession vote.

First Minister Nicola Sturgeon said she would campaign in the May 2021 Scottish Parliament election for a mandate to hold a vote on independence "in the early part of the new parliament," which will run from 2021 to 2025.

In a speech to a conference of her Scottish National Party -- held virtually because of the coronavirus pandemic -- Sturgeon said Scotland had a right to choose independence, "if a majority of us want it."

"That inalienable right of self-determination cannot, and will not, be subject to a Westminster veto," she said, referring to the U.K. government in London.

Scotland voted to remain in the U.K. by a margin of 55%-45% in a 2014 independence referendum that was billed as a once-in-a-generation event.

"The people of Scotland had a vote on this (in 2014), and they voted to remain part of the United Kingdom," Johnson spokesman Jamie Davies said Monday.

But Sturgeon's SNP, which leads the government in Edinburgh, says Brexit has transformed the situation by dragging Scotland out of the European Union against its will. A narrow majority of U.K. voters opted to leave the EU in a 2016 referendum, but a large majority in Scotland voted to stay.

Recent opinion polls suggest a majority of Scots now favour independence from the U.K., with Brexit and the coronavirus pandemic boosting support for Scotland going its own way.

Sturgeon's calm, clear communication style during the pandemic has been widely praised, with many contrasting it to Johnson's more ramshackle approach -- though the U.K. and Scottish governments have followed broadly similar public health policies, and both countries have seen high death tolls.

The whole of the U.K. has recorded more than 58,000 coronavirus-related deaths, the highest toll in Europe.

Sturgeon has not said what she will do if the U.K. government refuses to grant a referendum, though some pro-independence campaigners have suggested she could seek a ruling from the U.K. Supreme Court.

In an apparent reference to President Donald Trump's fruitless efforts to overturn the result of the U.S. presidential election. Sturgeon said that "we are seeing across the Atlantic what happens to those who try to hold back the tide of democracy."

"They get swept away," she said.