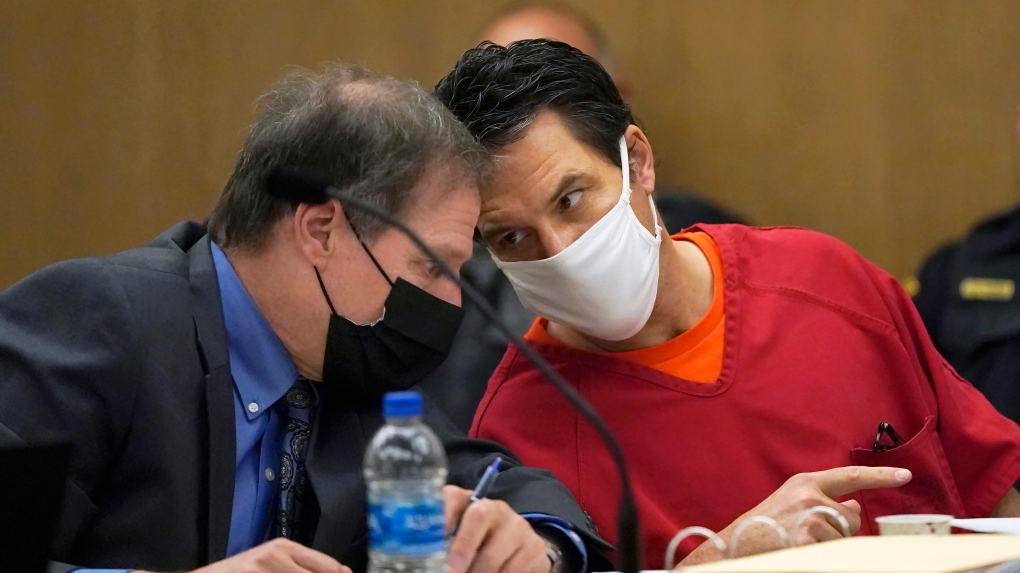 The juror at the heart of convicted murderer Scott Peterson's retrial bid swore Friday that she had no animosity toward him until after she heard evidence that he had killed his pregnant wife in a case that grabbed worldwide attention in 2004.

"Before the trial, I didn't have any anger or any resentment toward Scott at all. After the trial, it was a bit true, because I sat through the trial and listened to the evidence," former juror Richelle Nice testified.

Peterson's lawyers want to prove that she held a secret bias against him that prevented him from getting a fair trial, and that she lied on her jury questionnaire to get there.

But she generally stuck to her earlier written statements under questioning. She said she didn't consider herself a victim of domestic violence, didn't directly fear for her own unborn child and relied on the evidence during trial.

Nice helped convict Peterson in 2004 of the murders of his wife, Laci Peterson, 27, who was eight months pregnant, and of the unborn son they planned to name Conner. Prosecutors say he dumped his wife's body into San Francisco Bay on Christmas Eve 2002. The remains surfaced months later.

Nice testified only after she was granted immunity from perjury prosecution for misstatements she may have made in the earlier sworn statement.

In it, and in Friday's testimony, she explained why she didn't disclose on a pre-trial jury questionnaire that she had sought a restraining order while pregnant in 2000, saying then that she "really fears for her unborn child."

She also disputed on the stand court documents indicating that her live-in boyfriend had assaulted her while she was again pregnant, testifying that it was she who hit him.

Nice is being addressed in court by name, though she previously was referred to as Juror 7. She also used her name during post-trial media interviews and when she co-authored a book about the case with six other jurors.

She was nicknamed "Strawberry Shortcake" during the trial for her dyed bright red hair, which is now brown on top and blondish at the bottom.

Peterson appeared in court wearing a San Mateo County Jail uniform after Superior Court Judge Anne-Christine Massullo denied his request to wear street clothes for what is expected to be a week-long hearing.

Massullo is charged by the California Supreme Court with deciding if Nice committed misconduct by not disclosing her own history before she became a juror, and if she held a bias that denied Peterson a fair trial.

Nice generally said her previous sworn written denials were true, but with some nuances.

She didn't consider herself a victim of domestic violence because in the case in 2000, her boyfriend's ex-girlfriend didn't directly threaten her unborn child -- despite the wording in her application for a restraining order at the time.

"She didn't threaten my baby," Nice testified, saying that she included her unborn child in her application because "I was being spiteful."

"She wasn't going to deliberately hurt my child, but if we fought and rolled around like some dummies on the ground ... I was in fear I would lose my child doing something stupid like that," Nice testified.

And although her live-in boyfriend in 2001 was arrested and pleaded guilty, Nice said the truth was that she hit him and not the other way around.

"Eddie never hit me, so I was not a victim of domestic violence," she testified. "I did punch him, yes."

It was her boyfriend who then called the police on her, but she didn't cooperate and it backfired when he was arrested instead, Nice testified.

She said police may have been misled into arresting the wrong person because she had inadvertently cut her lip on the braces she was wearing at the time.

One of Peterson's attorneys, Pat Harris, suggested in his questioning that Nice may have been biased against Peterson because her then-boyfriend was admittedly unfaithful, though she denied it influenced her.

Peterson was arrested only after his own paramour came forward, saying Peterson had told her his wife was gone a month before her actual disappearance.

Nice generally stuck by her answer on the jury questionnaire when she answered "no" to having ever been a crime victim. She expanded on her sworn declaration in 2020 that she didn't "feel `victimized' the way the law might define that term."

"I've been in many fights, and I don't consider myself a victim. It may be different for you or somebody else," she told Harris.

Nice said it is "absolutely true" when she said in the 2020 written declaration that she did "not form any conclusions regarding the evidence in the case until I was called into the jury deliberation room."

She denied being in financial difficulty at the time or borrowing US$1,000 from another juror, contradicting others' expected testimony and previous statements.

Peterson's attorneys plan to put on witnesses they contend show that Nice went into the trial biased because she could relate as a mother to the death of Peterson's unborn baby.

Nice contradicted other witnesses' expected testimony by saying she never nicknamed any of her four sons "little man," nor does she recall referring to Peterson's unborn son by that nickname during the trial or deliberations.

She said she first remembers using the nickname after the trial was over, in her first media interview.

The judge will have up to 90 days after the hearing to announce her ruling, which can be appealed by either side.