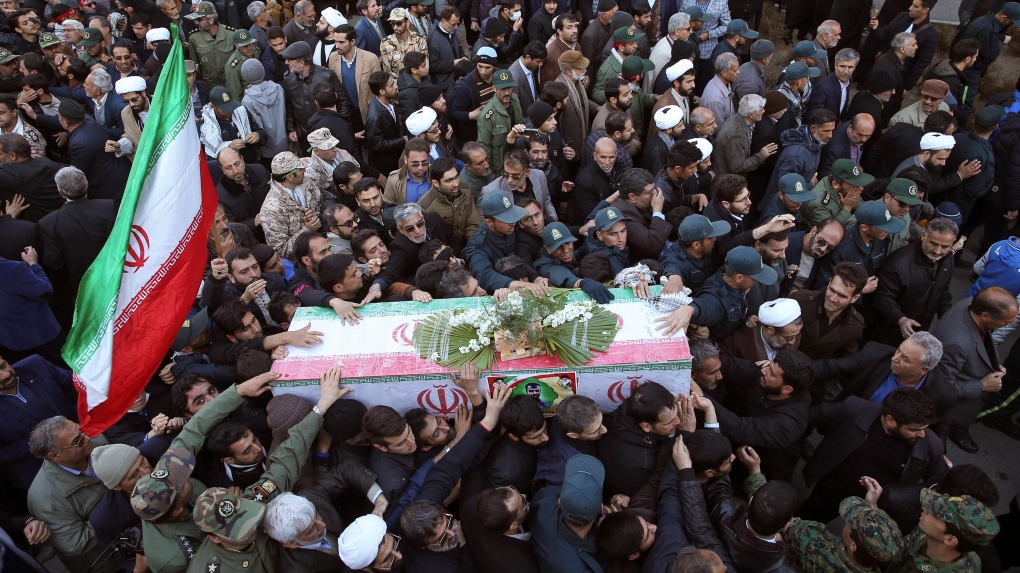 Mourners a carry flag-draped casket during a mass funeral for those killed in a suicide car bombing that targeted members of Iran's powerful Revolutionary Guard in earlier in the week, killing at least 27 people, in Isfahan, Iran, Saturday, Feb. 16, 2019. (AP Photo/Ebrahim Noroozi)

ISLAMABAD -- A senior Saudi diplomat on Monday fired back after Iran initially blamed the kingdom for an attack last week that killed 27 members of Iran's elite Revolutionary Guard.

Adel al-Jubeir, the minister of state for foreign affairs, called Iran a "chief sponsor of terrorism," saying its allegations sought to divert the attention of the Iranian people from the country's own troubles.

"Saudi Arabia has been the victim of terrorism," he added, saying the kingdom would continue to be "unmerciful" in going after terrorists and those who finance and condone them.

The comments came as Saudi Crown Prince Mohammed bin Salman was concluding a two-day visit to Pakistan. Al-Jubeir, the kingdom's former foreign minister, is part of the prince's entourage.

Iranian officials had at first said that Saudi Arabia and the United Arab Emirates were behind Wednesday's bombing near the Pakistani border, but later said the attack was planned from "inside Pakistan." The militant Sunni group Jaish al-Adl, which claimed responsibility, is believed to operate from havens in Pakistan.

Pakistan has close ties to Saudi Arabia, which views Iran as a regional threat, and often balances between Riyadh and Tehran.

Pakistan's Foreign Minister Shah Mahmood Qureshi told his Iranian counterpart on Sunday that Islamabad would fully co-operate in the investigation into the attack on the Revolutionary Guard. Pakistan has also pledged to act if Tehran shares evidence against those linked to the attack.

On Monday, three Pakistani security officials said a search operation was underway in remote southwestern regions bordering Iran in an effort to arrest suspects linked to attacks in Pakistan and Iran. They said the security forces were searching areas where Tehran believed insurgents responsible for last week's attack might be hiding.

The officials said the operation began Sunday and was expanded after militants killed six Pakistani paramilitary troops in two attacks in the southwestern towns of Turbat and Loralai.

The officials, who spoke on condition of anonymity because they were not authorized to brief media, said Pakistani and Iranian officials have been in touch since the attack.

Gen. Mohammad Hossein Bagheri, the head of Iran's armed forces, said the Pakistani army had launched an operation near the border. He urged Pakistan to confront armed groups or "let Iranian forces enter the battlefield."

Pakistan voiced support for the prince during the international outcry after the killing of Washington Post columnist Jamal Khashoggi by Saudi agents in October. The kingdom has long provided aid to Pakistan, and signed an agreement for a $6 billion assistance package after Pakistan's Prime Minister Imran Khan attended an investment conference that month that saw a wave of cancellations linked to the Khashoggi killing.

Pakistani President Arif Alvi on Monday conferred the country's highest civilian honour on the Saudi crown prince, who left Pakistan amid tight security. Khan drove the prince to the airport.

Prince Mohammad is expected to travel onward to neighbouring India, which has warned Pakistan of a "crushing response" to the suicide bombing of a paramilitary convoy in Indian-controlled Kashmir that killed 41 people on Thursday.

In a joint statement Monday, Pakistan and Saudi Arabia reiterated their commitment to continue combating extremism and terrorism and promoting peace in Afghanistan.