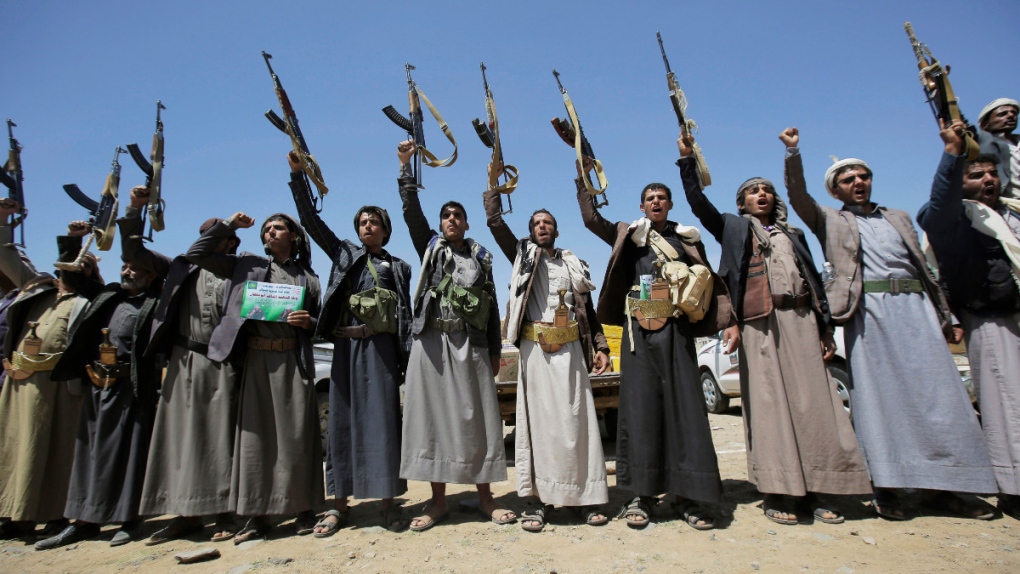 FILE - In this Saturday Sept. 21, 2019 file photo, Shiite Houthi tribesmen hold their weapons as they chant slogans during a tribal gathering showing support for the Houthi movement, in Sanaa, Yemen. (Hani Mohammed / AP)

CAIRO -- A ceasefire proposed by the Saudi-led coalition fighting Iran-backed Houthi rebels in Yemen went into effect Thursday, potentially paving the way for peace talks to end the more than 5-year-old conflict.

Houthi rebels, who control northern Yemen and the capital, Sanaa, quickly dismissed the offer as a ploy by the kingdom to boost its international standing while a spokesman for the rebel forces accused the coalition of several attacks on Thursday.

"This announcement does not express a genuine intention to achieve peace," said Mohammed al-Bukhaiti, a Houthi official. "The Saudis are still employing their air, land and naval forces to tighten the siege on Yemen ... this is an announcement only to restore (their positions), to close ranks."

Saudi officials said late Wednesday the ceasefire would last for two weeks and that it's in response to UN calls to halt hostilities amid the new coronavirus pandemic.

Saudi military spokesman Col. Turki al-Malki said the truce could be extended to allow warring parties to discuss "a comprehensive political solution in Yemen." He said that the coalition envisions three-way peace talks in which the Houthis, the UN-backed government of Yemeni President Abed Rabo Mansour Hadi, and a military team from the coalition would sit down to negotiate a durable settlement.

But the initiative could also be an attempt by the monarchy to pull out of a war that has proved financially and politically costly.

Saudi Deputy Defence Minister Prince Khalid bin Salman tweeted Thursday that it "will hopefully create a more effective climate to deescalate tensions" and enable the sides to work toward a political settlement.

He also said Saudi Arabia would contribute $500 million to UN relief efforts in Yemen this year, and an additional $25 million to combat the pandemic. "It is up to the Houthis to put the health and safety of the Yemeni people above all else," the prince wrote.

So far, Yemen hasn't recorded any cases of the new coronavirus but UN and international aid agencies have warned of a "catastrophic" impact on a population with degraded immunity and war-weakened health infrastructure.

"After five years of war, vulnerabilities are high and immunities are low across the population as a whole," UN Humanitarian Coordinator Lise Grande told The Associated Press from Sanaa on Thursday. "If the virus enters Yemen and spreads, the impact will be huge, possibly catastrophic."

An International Rescue Committee representative in Yemen said Thursday that more than half of Yemen's medical facilities are not functioning and that millions of Yemenis have no access to proper hygiene, water or sanitation.

"This (ceasefire) promises to be a much needed respite for the 24 million Yemenis in desperate need of humanitarian aid," said Tamuna Sabedze, IRC's Yemen country director.

She pointed out that an isolation facility outside of the port city of Hodeidah was hit by an airstrike earlier this week. "We cannot control a global pandemic amongst bombs and airstrikes," Sabedze said

The Saudi-led coalition has been fighting the Houthis since 2015 on behalf of Hadi's government. The conflict has killed over 100,000 people and created the world's worst humanitarian crisis, leaving millions suffering from food and medical care shortages and pushing the country to the brink of famine.

Shortly after the Saudi announcement, residents in the contested Yemeni province of Marib said a suspected Houthi missile struck a security building in the city centre. There was no immediate claim of responsibility or reports of casualties.

Houthi military spokesman Yehia Sarea said the Saudi forces carried out a series of incursions on Houthi-controlled territory near the border on Thursday -- an escalation that's "bound to failure and defeat."

Previous attempts at peace talks and ceasefires have failed to hold but this time, the kingdom faces new realities.

With oil prices hovering just above $30 a barrel, Saudi Arabia has said it will cut government spending as it draws from its hefty foreign reserves to prop up the economy amid a shutdown of businesses across the country due to the pandemic.

Saudi Arabia is one of the world's top spenders on arms and there's no indication the government's spending cuts will immediately impact its defence budget, but the cost of war in Yemen weighs heavily as government revenues plummet due to low oil prices. The Wilson Center estimates that the price tag to sustain air, ground and sea operations in Yemen can reach up to $200 million a day, though it's unclear how much of that Saudi Arabia has paid.

The Saudi-led coalition was also dealt a blow last summer after the United Arab Emirates undertook "a strategic redeployment" of its troops in Yemen following heightened tensions with Iran in the Persian Gulf, leaving the coalition with a weakened ground presence and fewer tactical options. Also, series of drone strikes targeting Saudis' Aramco, the world's largest oil processing facility, forced the kingdom to briefly shut down half its oil production in September.

The United States, which provides logistical and intelligence support in addition to billions of dollars in arms deals, welcomed the Saudi-led coalition's ceasefire proposal and stressed that "an enduring solution will require compromise from all sides."