Saudi Arabia to allow movie theatres after decades of ban 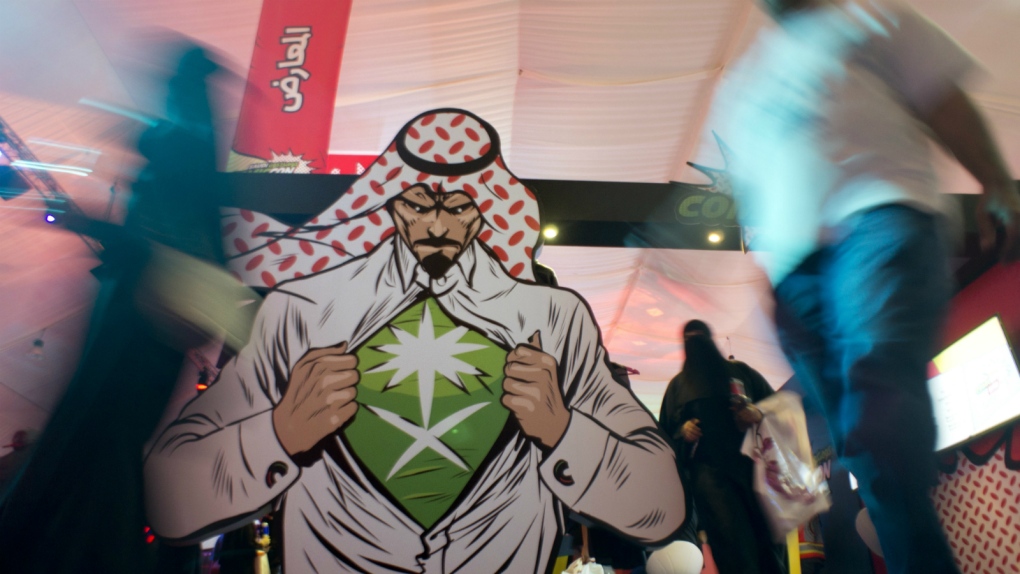 Visitors enter the Saudi Comic Con (SCC) which is the first event of its kind to be held in Jiddah, Saudi Arabia on Friday, Feb. 17, 2017.(AP Photo)

RIYADH, Saudi Arabia -- Saudi Arabia announced on Monday it will allow movie theatres to open in the conservative kingdom next year, for the first time in more than 35 years, in the latest social push by the country's young crown prince.

It's a stark reversal in a county where movie theatres were shut down in the 1980's during a wave of ultraconservatism in the country. Many of Saudi Arabia's clerics view Western movies and even Arabic films made in Egypt and Lebanon as sinful.

Despite decades of ultraconservative dogma, Crown Prince Mohammed bin Salman has sought to ram through a number of major social reforms with support from his father, King Salman.

The crown prince is behind measures such as lifting a ban on women driving next year and bringing back concerts and other forms of entertainment to satiate the desires of the country's majority young population. The 32-year-old heir to the throne's social push is part of his so-called Vision 2030, a blueprint for the country that aims to boost local spending and create jobs amid sustained lower oil prices.

The Saudi government said a resolution was passed Monday paving the way for licenses to be granted to commercial movie theatres, with the first cinemas expected to open in March 2018.

Many Saudis took to Twitter to express their joy at the news, posting images of buckets of movie theatre popcorn and moving graphics of people dancing, fainting and crying.

"It's spectacular news. We are in a state of shock," said Saudi actor and producer, Hisham Fageeh.

Fageeh starred in and co-produced the Saudi film "Barakah Meets Barakah" by director Mahmoud Sabbagh, which premiered at the Berlin International Film Festival in February. The movie, which has been called the kingdom's first romantic comedy, tells the story of a civil servant who falls for a Saudi girl whose Instagram posts have made her a local celebrity.

"We are essentially pioneers because we all took risks to work in this industry," he said. "We were super lucky, because luck is always a factor of whether we make it or not."

Even with the decades-long ban on movie theatres, Saudi filmmakers and movie buffs were able to circumvent traditional censors by streaming movies online and watching films on satellite TV. Many also travelled to neighbouring countries like Bahrain and the United Arab Emirates to go to movie theatres.

One Saudi Twitter on Monday user posted a picture of the causeway linking Saudi Arabia with Bahrain, writing "Good bye".

It was not immediately clear if movie theatres would have family-only sections, segregating women and families from male-only audiences. Another unknown was whether most major Hollywood, Bollywood and Arabic movie releases would be shown in theatres and how heavily edited the content will be.

In a statement carried on the state-run Saudi Press Agency, the Ministry of Culture and Information said that movie content "will be subject to censorship" to ensure films do not contradict Islamic law, or Shariah, and the kingdom's moral values.

The government said it will announce additional regulations in the coming weeks.

Fageeh said that while he's concerned with the censorship rules that might be in place, he's also concerned that scenes of violence are typically permitted on screens across the Arab world, but "any kind of intimacy and love is considered taboo and a moral violation."

"It's a global conversation we need to have," he said.

Despite there being no movie theatres in Saudi Arabia, young Saudi filmmakers have received government support and recognition in recent years. The government has backed a Saudi film festival that's taken place for the past few years in the eastern city of Dhahran. This year, some 60 Saudi films were screened.

The film "Wadjda" made history in 2013 by becoming the first Academy Award entry for Saudi Arabia, though it wasn't nominated for the Oscars. The movie follows the story of a 10-year-old girl who dreams of having a bicycle, just like boys have in her ultraconservative neighbourhood where men and women are strictly segregated and where boys and girls attend separate schools. The film was written and directed by Saudi female director Haifaa al-Mansour, who shot the film entirely in the kingdom.

That film and "Barakah meets Barakah", though four years apart, tackle the issue of gender segregation in Saudi Arabia, which remains largely enforced.

The Saudi government projects that the opening of movie theatres will contribute more than 90 billion riyals ($24 billion) to the economy and create more than 30,000 jobs by 2030. The kingdom says there will be 300 cinemas with around 2,000 screens built in the country by 2030.

Fageeh said it's important the government provides even greater support to local filmmakers now that international films will dominate theatres.

"There needs to be an effort to be cognizant and inclusive for this element of local films or we will be completely flushed out because of the nature of capitalism and will be operating in the margins," he said.

Saudi Arabia to open cinemas after a 35-year ban