Saudi Arabia: Drone attacks knocked out half its oil supply 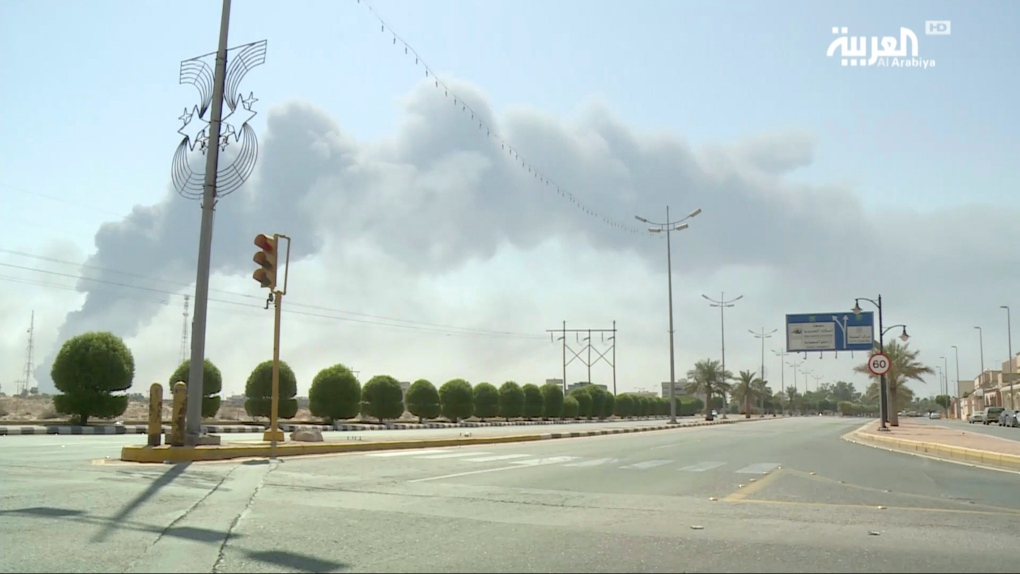 In this image made from a video broadcast on the Saudi-owned Al-Arabiya satellite news channel on Saturday, Sept. 14, 2019, smoke from a fire at the Abqaiq oil processing facility can be seen in Buqyaq, Saudi Arabia. (Al-Arabiya via AP)

DUBAI, United Arab Emirates -- Yemen's Houthi rebels launched drone attacks on the world's largest oil processing facility in Saudi Arabia and a major oil field Saturday, sparking huge fires and halting about half of the supplies from the world's largest exporter of oil.

The attacks were the latest of many droneassaults on the kingdom's oil infrastructure in recent weeks, but easily the most damaging. They raise concerns about the global oil supply and likely will further increase tensions across the Persian Gulf amid an escalating crisis between the U.S. and Iran over its unraveling nuclear deal with world powers.

The attacks resulted in "the temporary suspension of production operations" at the Abqaiq oil processing facility and the Khurais oil field, Energy Minister Prince Abdulaziz bin Salman said in a statement carried by the state-run Saudi Press Agency. The fires "were controlled," the statement said, and no workers were injured.

The fires led to the interruption of an estimated 5.7 million barrels in crude supplies, according to the statement, which said part of that would be offset with stockpiles. The statement said Saudi Aramco, the state-owned oil giant, would provide updated information in the next 48 hours.

The Iranian-backed Houthis, who hold Yemen's capital, Sanaa, and other territory in the Arab world's poorest country, took responsibility for the attacks in the war against a Saudi-led coalition that has fought since 2015 to reinstate the internationally recognized Yemeni government. But the U.S. blamed Iran, with Secretary of State Mike Pompeo tweeting, "There is no evidence the attacks came from Yemen."

In a short address aired by the Houthi's Al-Masirah satellite news channel, military spokesman Yahia Sarie said the rebels launched 10 drones after receiving "intelligence" support from those inside the kingdom. He warned that attacks by the rebels would only get worse if the war continues.

"The only option for the Saudi government is to stop attacking us," Sarie said.

Houthi rebels have been using drones in combat since the start of the Saudi-led war. The first appeared to be off-the-shelf, hobby-kit-style drones. Later, versions nearly identical to Iranian models turned up. Iran denies supplying the Houthis with weapons, although the U.N., the West and Gulf Arab nations say Tehran does.

U.N. investigators said the Houthis' new UAV-X drone likely has a range of up to 1,500 kilometres (930 miles). That puts the far reaches of both Saudi Arabia and the United Arab Emirates in range.

First word of Saturday's assault came in online videos of giant fires at the Abqaiq facility, some 330 kilometres (205 miles) northeast of the Saudi capital, Riyadh. Machine-gun fire could be heard in several clips alongside the day's first Muslim call to prayers, suggesting security forces tried to bring down the drones just before dawn. In daylight, Saudi state television aired a segment with its local correspondent near a police checkpoint, a thick plume of smoke visible behind him.

President Donald Trump called Saudi Arabia's Crown Prince Mohammed bin Salman to offer his support for the kingdom's defence, the White House said. The crown prince assured Trump that Saudi Arabia is "willing and able to confront and deal with this terrorist aggression," according to a news release from the Saudi Embassy in Washington.

Saudi Aramco describes its Abqaiq oil processing facility in Buqyaq as "the largest crude oil stabilization plant in the world."

"This is one of the biggest central processing facilities in the world. The Iran conflict is going to be hitting the world in a new way," said Kevin Book, managing director, research at ClearView Energy Partners LLC.

There was no immediate impact on global oil prices as markets were closed for the weekend. Benchmark Brent crude had been trading at just above $60 a barrel.

While Saudi Arabia has taken steps to protect itself and its oil infrastructure, analysts had warned that Abqaiq remained vulnerable. The Rapidan Energy Group, a Washington-based advisory group, warned in May that "a successful attack could lead to a monthslong disruption of most Saudi production and nearly all spare production." It called Abqaiq, close to the eastern Saudi city of Dammam, "the most important oil facility in the world."

In a report published Saturday, Helima Croft, global head of commodity strategy at RBC Capital Markets, noted that although Aramco officials have indicated that exports will resume in the next few days, "there is nothing to suggest that this is a one-off event and that the Iranian-backed Houthi rebels will forgo further strikes on Saudi sites."

The war has become the world's worst humanitarian crisis. The violence has pushed Yemen to the brink of famine and killed more than 90,000 people since 2015, according to the U.S.-based Armed Conflict Location & Event Data Project, or ACLED, which tracks the conflict.