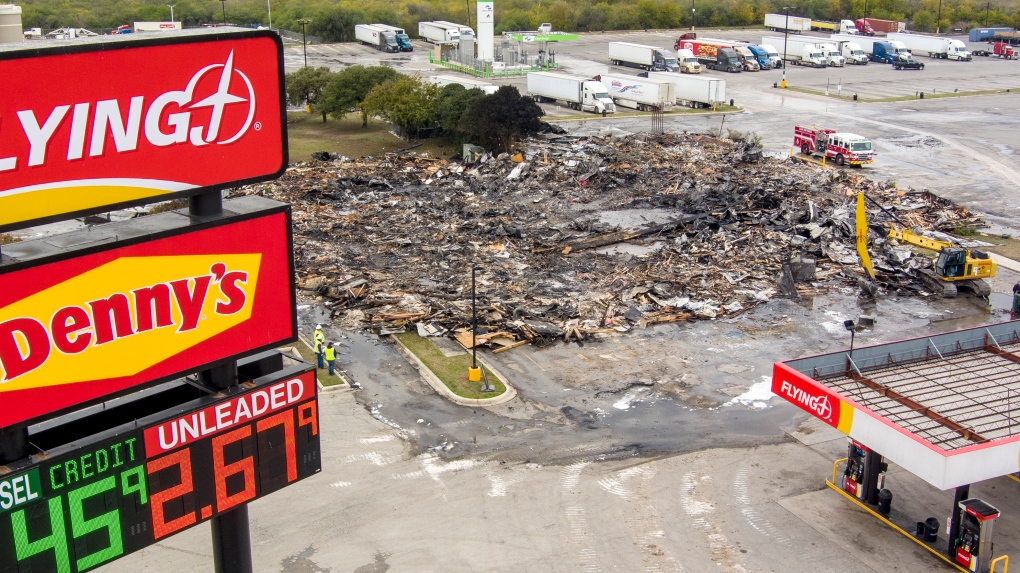 The remains of a combined Denny's restaurant and Pilot Flying J Travel Center near Interstate 10 are seen on Thursday, Dec. 1, 2022, after a morning fire destroyed the building in San Antonio. (William Luther/The San Antonio Express-News via AP)
SAN ANTONIO -

A massive fire broke out at a San Antonio truck stop early Thursday, engulfing the convenience store in flames and sending a large plume of smoke into the air.

Firefighters first received a call at about 5 a.m. Thursday about a fire that broke out inside the kitchen of a Denny's restaurant that is attached to a Flying J Travel Center near Interstate 10, San Antonio Fire Chief Charles Hood told San Antonio TV station KSAT.

Hood said no one was injured by the fire.

The flames quickly spread from the kitchen to the rest of the building, fueled by kitchen grease and windy conditions outside, Hood said.

Caleb Hoover, a spokesman for the Pilot Co., the company that jointly owns Flying J, thanked fire officials and first responders for their quick response.

"We are grateful to our team members and responders at the scene who helped ensure everyone on property was able to evacuate the building safely," Hoover told the San Antonio Express-News.

Hoover said the company will provide support for employees and make jobs available at nearby travel centers.