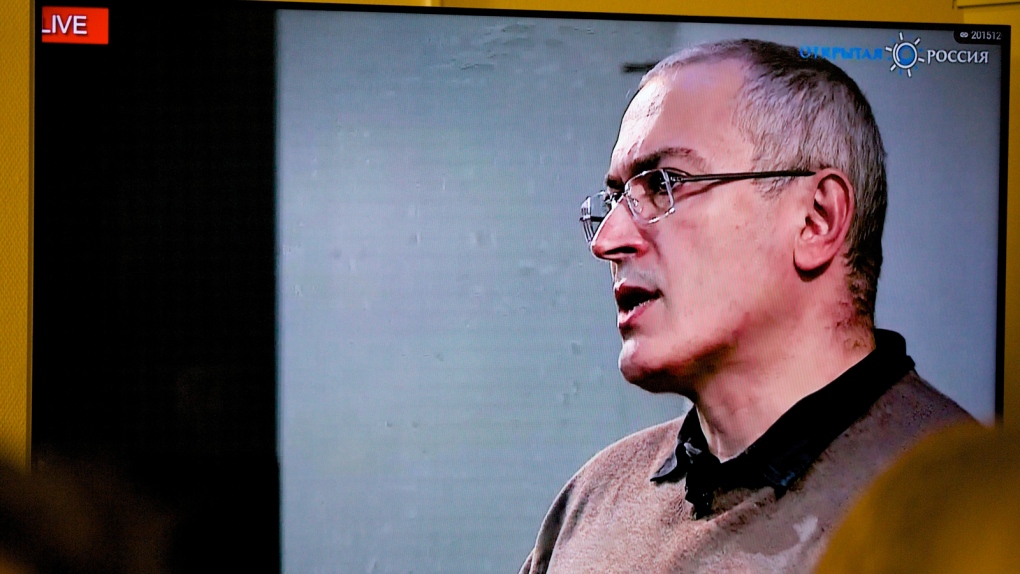 Mikhail Khodorkovsky, once Russia's richest man, speaks during a webcast conference in London, and is seen on a TV screen in Open Russia movement office in Moscow, Russia, on Wednesday, Dec. 9, 2015. (AP / Ivan Sekretarev)

MOSCOW -- Russia's top investigative agency on Friday accused exiled tycoon and former prisoner Mikhail Khodorkovsky of involvement in the 1998 killing of a Siberian mayor, accusations he has dismissed as sham.

The accusations come two days after Khodorkovsky said that President Vladimir Putin has driven Russia into a position when a revolution is "inevitable and necessary" and that that he will help to bring it about.

The Investigative Committee said Friday its probe has revealed that Khodorkovsky was involved in the slaying of Vladimir Petukhov, the mayor of Nefteyugansk, the town where Khodorkovsky's oil company, Yukos, was headquartered at the time.

The committee also accused Khodorkovsky of involvement in the attempted killing of businessman Yevgeny Rybin in 1999. Rybin survived the assassination attempt, but his bodyguard was killed.

The authorities in the past said they suspected Khodorkovsky of involvement in those cases, but they have failed to produce any proof.

Khodorkovsky has repeatedly denied the accusations.

Khodorkovsky, 52, once Russia's richest man, spent 10 years in prison on tax evasion and embezzlement charges widely seen as punishment for challenging President Vladimir Putin's power. He was pardoned and released in December 2013, shortly before the Winter Games in Sochi. He had been due to be released in August the following year.

Since his release, Khodorkovsky has continued to oppose the Kremlin from exile in Switzerland.

He said Wednesday that when he was pardoned he gave his word to Putin not to go into politics before his prison term would have ended and while he was taking care of his ailing mother. Since his mother died last August, Khodorkovsky said he felt he "no longer had any obligations."