SEVASTOPOL, Ukraine -- Armed men described as Russian troops took control of key airports in Crimea on Friday and Russian transport planes flew into the strategic region, Ukrainian officials said, an ominous sign of the Kremlin's iron hand in Ukraine. President Barack Obama bluntly warned Moscow "there will be costs" if it intervenes militarily.

The sudden arrival of men in military uniforms patrolling key strategic facilities prompted Ukraine to accuse Russia of a "military invasion and occupation" -- a claim that brought an alarming new dimension to the crisis.

In a hastily arranged statement delivered from the White House, Obama called on Russia to respect the independence and territory of Ukraine and not try to take advantage of its neighbour, which is undergoing political upheaval.

"Any violation of Ukraine's sovereignty and territorial integrity would be deeply destabilizing," Obama said.

"Just days after the world came to Russia for the Olympic Games, that would invite the condemnation of nations around the world," Obama said. "The United States will stand with the international community in affirming that there will be costs for any military intervention in Ukraine."

He did not say what those costs might be.

Earlier Friday, Ukraine's fugitive president resurfaced in Russia to deliver a defiant condemnation of what he called a "bandit coup."

Appearing for the first time since fleeing Ukraine last week, Viktor Yanukovych struck a tone both of bluster and caution -- vowing to "keep fighting for the future of Ukraine," while ruling out seeking Russian military help.

"Any military action in this situation is unacceptable," Yanukovych told reporters in the southern city of Rostov-on-Don, near the border with Ukraine. Then, seeking to make a firm point, he tried -- and failed -- to break a pen.

At the United Nations, the Ukrainian ambassador, Yuriy Sergeyev, said that 10 Russian transport aircraft and 11 attack helicopters had arrived in Crimea illegally, and that Russian troops had taken control of two airports in Crimea.

He described the gunmen posted outside the two airports as Russian armed forces as well as "unspecified" units.

"Some of them identified themselves as Russians. We know specifically some of the units," Sergeyev said. He also said the Russians had captured the main air traffic control centre on Crimea.

He told The Associated Press that the Il-76 planes arrived unexpectedly and were given permission to land, one after the other, at Gvardeiskoye air base, north of the regional capital, Simferopol. Astakhov said the people in the planes refused to identify themselves and waved off customs officials, saying they didn't require their services.

Russia kept silent on claims of military intervention, even as it maintained its hard-line stance on protecting ethnic Russians in Crimea, a territory that was once the crown jewel in Russian and then Soviet empires and has played a symbolic role in Russia's national identity.

Earlier Friday, AP journalists in Crimea spotted a convoy of nine Russian armoured personnel carriers on a road between the port city of Sevastopol, where Russia has a naval base, and the regional capital, Simferopol. Later in the day, the airspace was closed over the peninsula, apparently due to tensions at the two airports.

Russian armoured vehicles bearing the nation's tricolour rumbled across Crimea and men described as Russian troops took position at airports and a coast guard base.

Oleksandr Turchynov, who stepped in as president after Yanukovych fled Kyiv last weekend, urged Russian President Vladimir Putin to stop "provocations" in Crimea and pull back military forces from the peninsula. Turchynov said the Ukrainian military would fulfil its duty but would not be drawn into provocations.

"I can only describe this as a military invasion and occupation," Arsen Avakov wrote in a Facebook post.

In recent conversations between U.S. and Russian officials, including a lengthy telephone conversation between Obama and Putin just last week, Obama said the U.S. has made clear that Russia can be part of an international community's effort to support the stability and success of Ukraine.

But, he said Friday, "we are now deeply concerned by reports of military movements taken by the Russian Federation inside of Ukraine."

Earlier Friday, as pro-Russia gunmen patrolled Crimean streets in armoured vehicles and took over airports there, Secretary of State John Kerry warned Moscow against military moves in Crimea that could further inflame tensions.

Kerry and White House spokesman Jay Carney both said any Russian military intervention would be a grave mistake and that the United States was watching closely. They did not spell out any consequences for an intervention.

The Russian armoured personnel vehicles seen by AP reporters were parked on the side of the road near the town of Bakhchisarai, apparently because one of them had mechanical problems.

Russia is supposed to notify Ukraine of any troop movements outside the Black Sea Fleet naval base it maintains in Sevastopol under a lease agreement with Ukraine.

The Russian Foreign Ministry said the military vehicles were deployed to ensure the security of its base and didn't contradict the lease terms.

A duty officer at the Ukrainian Defence Ministry said it had no information about the vehicles' movements.

AP journalists approaching the Sevastopol airport found the road leading to it blocked by two military trucks and a handful of gunmen wearing camouflage uniforms and carrying assault rifles.

A car with Russian military plates was stopped at the roadblock. A man wearing a military uniform with a Russian flag on his sleeve got out of the car and was allowed to enter on foot after a brief discussion with the gunmen.

Meanwhile, Ukraine International Airlines said it had cancelled flights to and from the Simferopol airport on Friday evening and Saturday because of the closure of the airspace over Crimea. The announcement did not say who had ordered the closure.

At the airport, dozens of armed men in military uniforms without markings patrolled the area. They didn't stop or search people leaving or entering the airport, and refused to talk to journalists.

One man who identified himself only as Vladimir said the men were part of the Crimean People's Brigade, which he described as a self-defence unit ensuring that no "radicals and fascists" arrive from other parts of Ukraine. There was no way to verify his account.

The airport deployments came a day after masked gunmen with rocket-propelled grenades and sniper rifles seized the parliament and government offices in Simferopol and raised the Russian flag. Ukrainian police cordoned off the area but didn't confront the gunmen. They remained in control of the buildings Friday.

In Kyiv, the prosecutor-general's office said it would seek Yanukovych's extradition to Ukraine, where he is wanted on suspicion of mass murder in violent clashes last week between protesters and police that left more than 80 people dead.

Meanwhile, Ukraine's telecom provider, Ukrtelecom JSC, said unknown people seized several communications centres in the Crimea late Friday, knocking out the company's ability to connect the peninsula with the rest of the country. The statement on the company's website said there were almost no landline, Internet or mobile services operating in the Crimea.

Ukraine's population is divided in loyalties between Russia and the West, with much of western Ukraine advocating closer ties with the European Union while eastern and southern regions look to Russia for support.

Crimea, a southeastern peninsula of Ukraine that has semi-autonomous status, was seized by Russian forces in the 18th century under Catherine the Great. It became part of Ukraine in 1954 when Soviet leader Nikita Khrushchev transferred jurisdiction from Russia, a move that was a mere formality until the 1991 Soviet collapse meant Crimea landed in an independent Ukraine.

"Crimea in the flashpoint everybody needs to be watching," said Steven Pifer, a former U.S. ambassador to Ukraine who is now an analyst at the Brookings Institution. 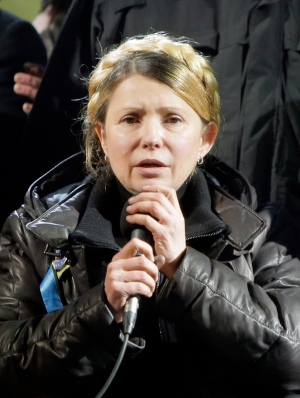 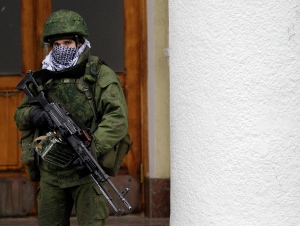 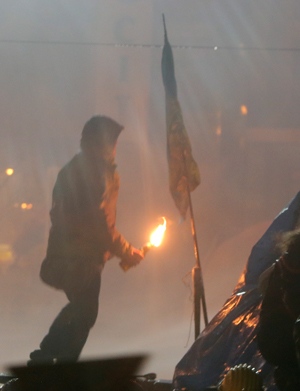