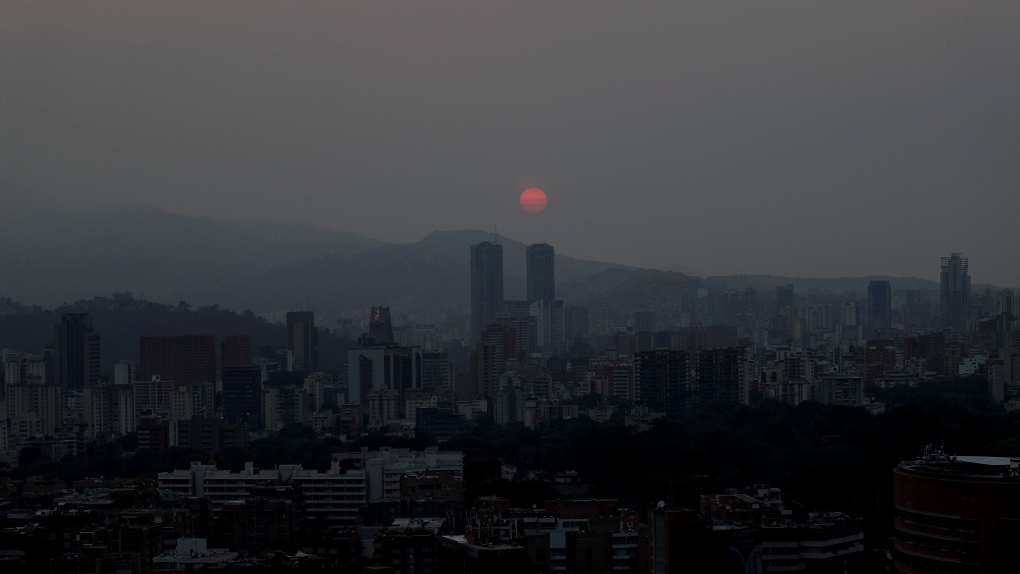 The sun sets over Caracas, Venezuela, Tuesday, March 26, 2019. Much of Venezuela remained without electricity Tuesday as a new power outage spread across the country. (AP Photo/Natacha Pisarenko)

MOSCOW -- Russia has scoffed at the U.S. demand to withdraw its military personnel from Venezuela, saying that their presence in the country is fully legitimate.

Russian Foreign Ministry spokeswoman Maria Zakharova said in a statement late Tuesday that the presence of Russian military personnel in Venezuela is "in strict accordance" with the Venezuelan constitution and a bilateral agreement on military co-operation. She said that it doesn't require any approval by Venezuela's opposition-controlled National Assembly.

Zakharova did not say how many Russia military experts have gone to Venezuela, but news reports indicated that two Russian planes delivered about 100 servicemen and 35 tons of cargo to Venezuela over the weekend.

On Wednesday, Zakharova lashed out at the U.S. call on Russia to withdraw its military personnel, saying that U.S. President Donald Trump should first honour his own pledge last fall to withdraw U.S. forces from Syria.

"Some liken the U.S. to an elephant in a china shop, but those animals behave delicately and reasonably," Zakharova said. "It acts on the international arena more like a cowboy in the Louvre Museum."

The U.S. and several dozen other nations have cast their support behind opposition leader Juan Guaido and recognized him as interim president, asserting that Maduro's re-election last year was illegitimate.

The rift over Venezuela has further strained Russia-U.S. ties, which have plunged to post-Cold War lows over the conflict in Ukraine, the war in Syria and Russian meddling in the 2016 U.S. presidential election.

He rejected the U.S. demands on Russia to end support for Venezuelan President Nicolas Maduro as "totally unacceptable" and invited the U.S. to "set a good example" by cutting its own global presence.

"A list of countries outside the Western Hemisphere where America has nothing to do will be too long," Kosachev said on Facebook. "And the withdrawal of the 'global cop' will definitely help independence and democracy in those regions much more than its constant military presence."

Nataliya Vasilyeva in Moscow contributed to this report.