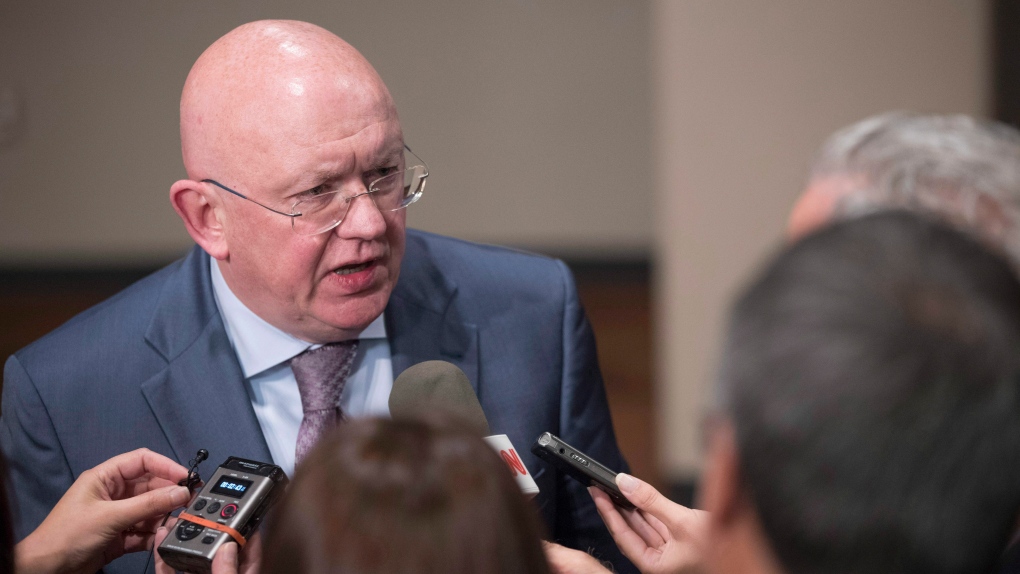 Russia's U.N. ambassador said Wednesday the expert body that has determined responsibility for chemical weapons attacks in Syria "is dead" -- but Moscow is ready to discuss "a new mechanism."

Vassily Nebenzia told reporters after a closed Security Council discussion that the Joint Investigative Mechanism, or JIM, "has discredited itself completely."

"But we are ready to talk about establishing a new mechanism that would replace the JIM and do the work in ... a truly professional and objective" way, he said.

Russia vetoed two council resolutions last week to keep the JIM in operation, and this week it rejected a Swedish-Uruguayan draft resolution before it went to a vote to revive the joint investigative body of the U.N. and the Organization for the Prohibition of Chemical Weapons.

At the heart of the dispute is Russia's demand for major changes in the way the JIM operates, and the insistence of the U.S. and about 10 other council members that its independence and operation remain unchanged.

Russia has been highly critical of the JIM's findings that the Syrian government, its close ally, used chlorine gas in at least two attacks in 2014 and 2015 and used the nerve agent sarin in an aerial attack on Khan Sheikhoun last April 4 that killed about 100 people and affected about 200 others who survived.

The JIM also accused the Islamic State extremist group of using mustard gas in 2015 and again in September 2016 in Um Hosh in Aleppo.

Syria has denied any use of chemical weapons, while Russia has accused the JIM of using faulty methods to determine that President Bashar Assad's government was to blame for the attacks, including not visiting Khan Sheikhoun. Nebenzia called the JIM's Khan Sheikhoun probe "a fictitious investigation."

U.S. Ambassador Nikki Haley said after Nebenzia's second veto Friday that "Russia will not agree to any mechanism that might shine a spotlight on the use of chemical weapons by its ally, the Syrian regime."

The OPCW, the international chemical weapons watchdog, has the job of determining whether chemical weapons were used in Syria, and it is currently assessing and investigating numerous allegations. But it is not mandated to determine who was responsible for chemical attacks, which is why the U.S. and Russia jointly sponsored the resolution in 2015 that established the JIM.

British Ambassador Matthew Rycroft told reporters Tuesday that "even if we don't have a JIM, we require something whose job it is to look at those reports from the OPCW and to determine which of the parties in Syria is responsible for each use of chemical weapons."

"That is a crucial building block towards accountability, towards making sure that there is justice for the victims and for the survivors and for their families," he told reporters. "And we are not going to give up, even if there is no more JIM."

Rycroft said supporters of the JIM are looking into what other international justice mechanism could replace it.

"It will be possible to do something," he said, "and we are determined to make sure that this gap is closed. We are not going to allow the JIM just to be killed off like this with nothing to replace it."

"There are mechanisms to look into these situations of chemical weapons everywhere, not only in Syria," he said. "We'll have to see what can be done. This requires a lot of doing."