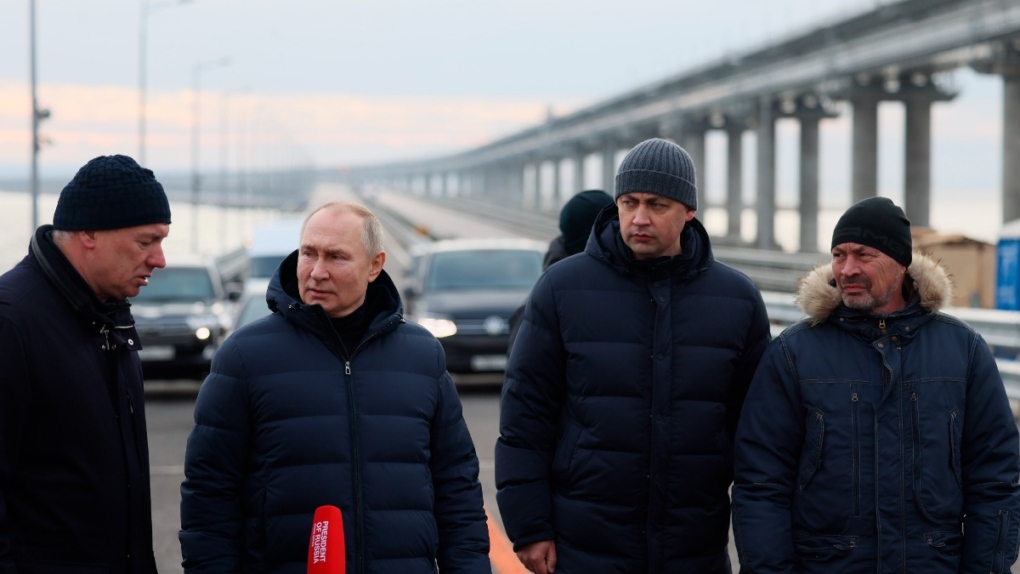 The unprecedented attack in Russia threatened a major escalation of the nine-month war because it hit an airfield housing bombers capable of carrying nuclear weapons. President Vladimir Putin has threatened to use all available means to defend his land, a remark many have interpreted to include nuclear weapons.

Russia has been launching almost weekly bombardments of Ukraine in retaliation for another bold attack -- the Oct. 8 truck bombing of a vital bridge linking its mainland to the Crimean Peninsula.

On Monday, Putin tried to show his country could bounce back from that embarrassment by driving a car across the partially repaired bridge. Putin personally opened the 19-kilometre (12-mile) bridge in 2018 as part of an expensive effort to solidify his claim on Crimea, which Russia illegally annexed in 2014.

Ukraine's air force claimed it shot down more than 60 of the 70 missiles, and Zelenskyy again showed defiance, praising workers who immediately tried to restore power.

"Every downed Russian missile is concrete proof that terror can be defeated," Zelenskyy said in his nightly address.

Electricity provider Ukrenergo said its facilities had been hit, triggering some blackouts, although the prime minster said later that power facilities were damaged in only three areas, not as widespread as in previous attacks.

In the capital of Kyiv, scores of people quickly filled the central Zoloti Vorota metro station after air raid warnings. There were no immediate signs the city or surrounding region had been hit.

"The enemy is again attacking the territory of Ukraine with missiles!" Kyrylo Tymoshenko, the deputy head of the Ukrainian president's office, wrote on Telegram.

In neighboring Moldova, the Interior Ministry said on its Facebook page that border patrol officers had found a rocket in an orchard near the northern city of Briceni, near the border with Ukraine. A bomb squad went to the scene, but it was not immediately clear when the rocket fell or who fired it.

In detailing the attacks on the air bases, the Russian Defense Ministry said it had shot down two Ukrainian drones. It said three Russian servicemen were killed and four others wounded by debris, and that two aircraft were slightly damaged.

The attacks on the Engels base in the Saratov region on the Volga River and the Dyagilevo base in the Ryazan region in western Russia were part of Ukraine's efforts to curtail Russia's long-range bomber force, the ministry said.

The Engels air base houses nuclear-capable bombers and is located more than 600 kilometres (more than 370 miles) east of the border with Ukraine. The Dyagilevo air base, which houses tanker aircraft used to refuel other planes in flight, is about 500 kilometres (over 300 miles) northeast of the Ukrainian border.

The attacks showed the vulnerability of some of Russia's most strategic military sites, raising questions about the effectiveness of their air defenses if drones could come so close to them.

The ministry didn't say where the drones had originated, but Russian military bloggers said they likely were launched by Ukrainian scouts.

Russian news agencies earlier had reported explosions at both sites, giving slightly different details than the Defense Ministry on casualties.

"If something is launched into other countries' airspace, sooner or later unknown flying objects will return to departure point," Podolyak tweeted.

In other developments, Zelenskyy's office said three rockets hit his hometown of Krivyi Rih in south-central Ukraine, killing a factory worker and injuring three other people. In the northeastern region of Kharkiv, a person was killed in strikes by S-300 missiles on civilian infrastructure in the town of Kupiansk, it said.

The war that began with Russia's invasion of Ukraine on Feb. 24 has displaced millions from their homes, killed and injured tens of thousands of people and shaken the world economy -- driving up the price and curtailing the availability of food, fertilizer and fuel that are key exports from Ukraine and Russia.

Western countries on Monday imposed a $60-per-barrel price cap and a ban on some types of Russian oil, part of new measures aimed at stepping up pressure on Moscow over the war.

The Kremlin rejected the move, and Zelenskyy has criticized it as insufficient.

"We will only sell oil and oil products to the countries that will work with us on market terms, even if we have to reduce output to some extent," Novak said.

In another step that took effect Monday, the 27-country European bloc imposed an embargo on Russian oil shipped by sea.

Russia, the world's No. 2 oil producer, relies on oil and gas to underpin its economy, already under sweeping international sanctions.