Crowds of well-wishers outside London’s St. Mary’s Hospital erupted in cheers Monday as the Royal Family announced that Prince William and the Duchess of Cambridge are parents to a baby boy, who is now third in line to the British throne.

The baby was born at 4:24 p.m. London time in the Lindo Wing of the hospital, where several members of the Royal Family have been born.

The new royal weighed 8 pounds and 6 ounces at birth, and both mother and baby are said to be doing well. Prince William was at his wife’s side during labour and the child’s birth.

The happy father issued a brief statement saying that he and the Duchess “could not be happier.”

Palace officials broke from tradition and issued a press release from Kensington Palace, the couple’s home. The release was sent to journalists to confirm the birth of Kate and William’s first born. However, Prince William called Queen Elizabeth, his father Prince Charles, and brother Prince Harry to tell them the news prior to the public announcement.

An easel announcing the royal birth was also placed on the grounds of Buckingham Palace, as is royal custom. The statement, signed by the Queen’s gynecologist Marcus Setchell, read: “Her Royal Highness The Duchess of Cambridge was safely delivered of a son at 4:24 p.m. today.

“Her Royal Highness and her child are both doing well.”

Clarence House said that the Duchess and her child will remain in hospital overnight.

Prince Charles and his wife Camilla, the Duchess of Cornwall, expressed their joy over the birth in a statement that read: “Both my wife and I are overjoyed at the arrival of my first grandchild. It is an incredibly special moment for William and Catherine and we are so thrilled for them on the birth of their baby boy.”

The statement went on to say that they are “eagerly looking forward to seeing the baby in the near future.”

The child is in line behind his father and grandfather for the British throne.

A boisterous crowd also gathered outside Buckingham Palace, cheering and taking photographs on the historic day.

"It's a crazy atmosphere, everyone is getting very excited," Andrew Aitchison, 47, told The Associated Press outside the palace. "It's great to be part of history, to say we were here and saw it all happen."

Shortly after Buckingham Palace announced the birth of the baby, governments of the Commonwealth sent their well wishes to the Duke and Duchess of Cambridge in press releases and on social media.

Gov.-Gen. David Johnston and his wife, Sharon, offered the new parents “our warmest congratulations,” saying that as parents and grandparents themselves, they “know well the elation that a new arrival brings to a young family.”

The statement went on: “May the years to come with this child be filled with love and pride for all members of the Royal Family.”

Prime Minister Stephen Harper said in a statement that he offered “heartfelt congratulations to the Royal Couple and the entire Royal Family.”

He went on to say: “The arrival of the newest member of the Royal Family, a future Sovereign of Canada, is a highly anticipated moment for Canadians given the special and warm relationship that we share with our Royal Family.”

British Prime Minister David Cameron tweeted his congratulations, saying that he is “delighted for the Duke and Duchess now their son has been born. The whole country will celebrate. They’ll make wonderful parents.”

U.S. President Barack Obama also released a statement, saying that he and his wife, Michelle, “wish them all the happiness and blessings parenthood brings.”

To celebrate the birth:

With the world watching, the Duchess of Cambridge went into labour early Monday morning.

A statement from Kensington Palace confirmed that Prince William and Kate had travelled to central London at about 6 a.m. London time.

The Duchess gave birth in the private Lindo Wing of the hospital where Princess Diana gave birth to Princes William and Harry.

The baby’s birth followed a weeks-long stakeout by the world’s media outside the hospital, which set up a holding pen for reporters and cameras across the road from the hospital’s entrance.

Days before the birth, empty camera tripods stood in rows behind temporary fencing and orange cones, which kept reporters off the street and away from the front door.

This is the first child for the Duke and Duchess, who were married on April 29, 2011 at Westminster Abbey in a ceremony attended by celebrities, prime ministers and royals from around the world.

Thousands of people lined the streets between the Abbey and Buckingham Palace to get a glimpse of the newlyweds, who famously kissed on the palace balcony for the cheering crowd.

The pair met in 2001 when they were students at St. Andrew’s University in Scotland, where they were housemates and friends before a romance blossomed. Their on-and-off relationship was breathlessly chronicled by the British media before William finally proposed on a trip to Kenya in 2010.

The couple formally announced their engagement to the press at St. James’s Palace on Nov. 16, 2010, when the bride-to-be revealed for the first time that she would wear the engagement ring given by Prince Charles to Princess Diana.

Pregnancy speculation began almost immediately after the nuptials, and on Dec. 3, 2012, St. James’s Palace announced that the Duchess was expecting.

This is the third great-grandchild for Queen Elizabeth II, who is great-grandmother to Savannah and Isla Phillips, daughters of Princess Anne’s son, Peter Phillips, and his Canadian wife, Autumn. Peter’s sister, Zara, also recently announced that she and her husband, rugby player Mike Tindall, are expecting a baby next year. 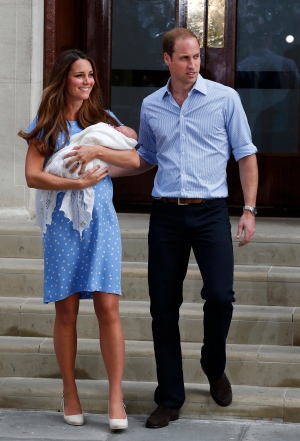 Duke and Duchess show off their royal baby 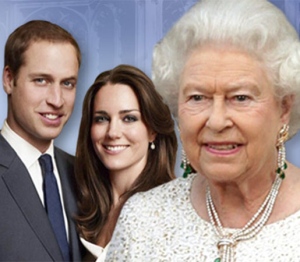