Remember that scene in Lady and the Tramp where the two dogs share a bowl of pasta and accidentally kiss when they slurp the same spaghetti strand?

This is a sweeter pasta story.

Police officers in Rome cooked a lonely elderly couple a batch of noodles and kept them company after they came upon them crying.

The officers responded to reports of shouting and crying at an apartment in the southeast part of the city last Tuesday.

The couple – Jole, 84, and her husband Michele, 94, - have been married nearly 70 years. They told the officers they were fine, but that it had been a long time since anyone had visited.

Watching sad stories on the news caused them to cry out, they said. Sometimes it’s all just too much.

The soft-hearted male officers, identified only as Andrea, Alessandro, Ernesto and Mirko, called for an ambulance to check that the pair were OK physically.

And then, because we all know Italians show love through food, they used the time to make a simple spaghetti – noodles with butter and parmesan - and sat down with the couple for a chat. 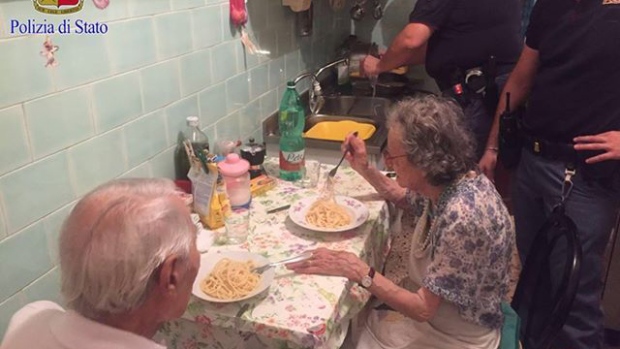 "There is not a crime. Jole and Michele are not victims of scams and no thief entered the house - there is no one to save," the police department said in Italian on its Facebook page. Two photos show the officers making the pasta while the couple is seated in their tiny kitchen.

"This time, for the boys, there is a more daunting task - two lonely souls who need reassuring,” reads the post, which has been shared almost 24,000 times and has more than 6,500 comments.

"They understand that just a little human warmth will restore tranquility to Jole and Michele."