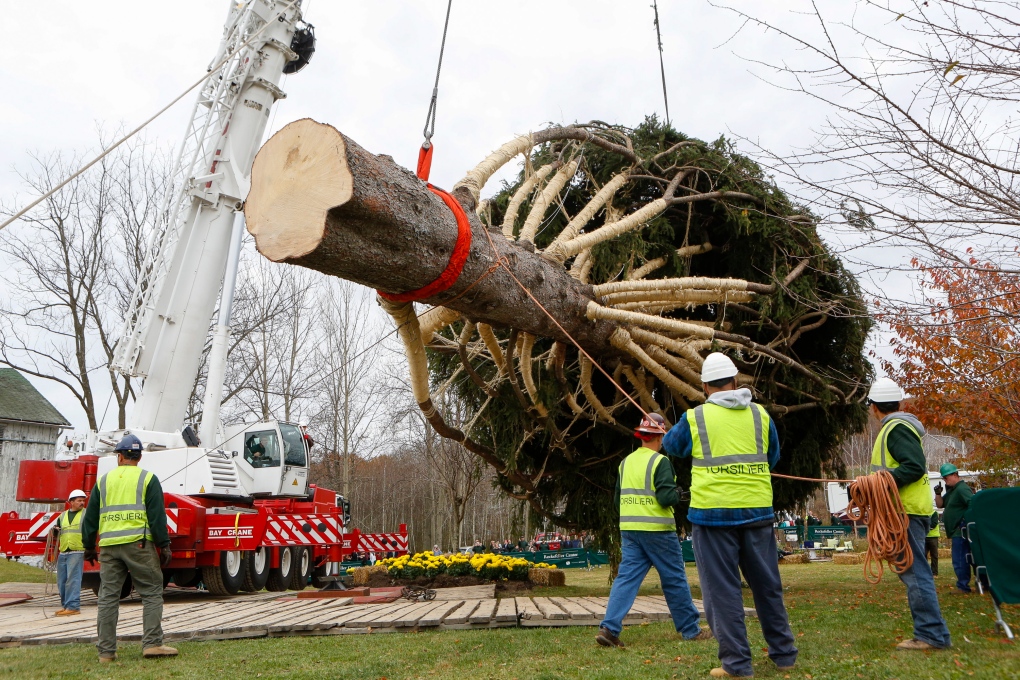 BLOOMSBURG, Pa. -- A 25-metre Norway spruce that belonged to a Pennsylvania family of "Christmas elves" will serve as Rockefeller Center's Christmas tree this year.

Workers cut down the 12-metric ton tree and a crane hoisted it onto a trailer Wednesday morning for the 250-kilometre journey to midtown Manhattan. It'll be illuminated for the first time on Dec. 3 in a ceremony that's been held since 1933.

The tree was donated by Dan Sigafoos, 38, and Rachel Drosdick-Sigafoos, 29, who live in a century-old farmhouse about three hours west of New York City. They begin their holiday season early by starting to play Christmas music in August or September.

"I am a big Christmas elf. My whole family are Christmas elves," said Drosdick-Sigafoos, a diving coach at Susquehanna University who also works part-time at a hospital. "So for me, this is just literally beyond my wildest dreams."

Erik Pauze, the head gardener at Rockefeller Center, was driving on Interstate 80 several years ago when he spied the tree from the highway.

He got off the highway and took pictures. But the tree wasn't quite ready, and the owner of the home didn't want to part with it.

When the Sigafooses purchased the farmhouse two years ago, the former owner's real estate agent mentioned that Rockefeller Center had been interested in the massive 90-year-old spruce next to the barn.

Once it's hoisted into place at 30 Rockefeller Plaza, the tree will be decorated with more than 45,000 LED lights and a 9 1/2-foot-wide (almost 3-meter-wide) Swarovski star.

The annual tree-lighting event at Rockefeller Center attracts tens of thousands of people and is watched by millions more on television.

After Christmas, the tree will return to Pennsylvania and its wood will be used to build homes for Habitat for Humanity, Drosdick-Sigafoos said.