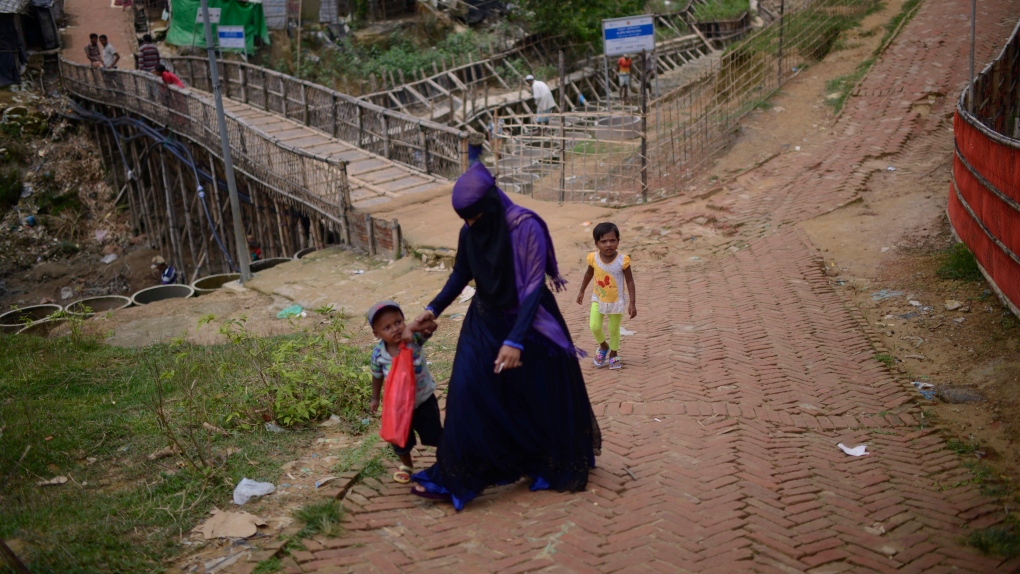 YANGON, Myanmar -- Plans announced by Myanmar's military to prosecute soldiers for actions at a village where security forces reportedly killed as many as 400 members of the Muslim Rohingya minority drew skepticism Monday from the New York-based rights group Human Rights Watch.

The military announced over the weekend that investigations had determined that orders were not properly followed at a village in Rakhine state. It gave no dates or other details of the offence, but said a court martial is being convened to act "in accordance with the military discipline due to the weakness in following the instructions in some of the incidents at Gutabyin village."

The Associated Press reported in January last year that evidence indicated that security forces had carried out a massacre in the village, also known as Gu Dar Pyin, and that the victims were buried in at least five mass graves. The military -- known in Myanmar as the Tatmadaw -- denied the report, and it is unknown if the new announcement is related to the same incident.

Human Rights Watch said Monday that the announcement did not indicate a change of attitude by the military, which denies carrying out abuses in a self-proclaimed counter-insurgency campaign two years ago that resulted in more than 700,000 Rohingya fleeing to neighbouring Bangladesh. It has said its military operations in Rakhine were justified in response to attacks by Rohingya insurgents

Many human rights groups have accused Myanmar of carrying out genocide or ethnic cleansing against the Rohingya. A U.N. fact-finding mission has documented major abuses in Rakhine since 2016, including widespread killings and torching of villages, and said its findings warrant prosecution for war crimes and crimes against humanity in a forum such as the International Criminal Court.

"The Tatmadaw's decision to court-martial a few soldiers is hardly enough when we're talking atrocities that included murder, torture, rape and arson that destroyed people and their communities. This court-martial looks like just another game to divert international attention by sacrificing a few low-level scapegoats," Phil Robertson, deputy director of the Asia division of Human Rights Watch, said in an email, urging that it should be the military's top commanders who face punishment.

"You can tell the Tatmadaw are not serious since they refuse to review their overall operation and hide these court-martial proceedings behind closed doors, out of sight of the public and media," Robertson said. "No one should be fooled to think this action marks any change of attitude in Myanmar's military, which is still denying they violated the rights of the Rohingya in the first place, and seeking to evade all international accountability for their crimes."

Myanmar has rejected the legitimacy of the U.N.'s fact-finding mission and asserted it is carrying out its own investigations. The announcement of the planned prosecutions came after what it said was investigations carried out by the military's own Court of Inquiry.

Radhika Coomaraswamy, a Sri Lankan lawyer who is one of the U.N. mission's three international experts, last month told an informal Security Council meeting on accountability in Myanmar that they believe a domestic judicial process is not possible at this time.

She pointed to seven soldiers who were sentenced to up to 10 years in prison with hard labour for the killings of 10 Rohingya villagers but then were released after just nine months "because of the national and political pressure." The arrests followed an investigation by two Reuters journalists who were imprisoned for their reporting on the killings.

Last year's Associated Press report said the existence of five mass graves in the village under investigation had been confirmed through multiple interviews with more than two dozen survivors in Bangladesh refugee camps and through time-stamped cellphone videos. It said its reporting showed a systematic slaughter of Rohingya civilians by the military, with help from Buddhist neighbours.

The story said it was unclear just how many people died, but that community leaders in the refugee camps compiled a list of 75 dead up to that point, and villagers estimated the toll could be as high as 400, based on testimony from relatives and the bodies they've seen in the graves and strewn about the area.