The uncle of one of three Israeli teens found murdered earlier this week says “revenge is unjustified,” after a Palestinian teen was abducted and killed Wednesday in east Jerusalem.

Yishai Fraenkel, uncle of Naftali Fraenkel, called upon Israelis and Palestinians to “refrain from any type of violence” following the deaths of the four young men.

“The life of an Arab is equally precious to that of a Jew. Blood is blood, and murder is murder, whether that murder is Jewish or Arab,” Fraenkel told CTV News Channel in a telephone interview from Israel.

“There’s no justification whatsoever to revenge or do anything as a result of the barbaric murder of my nephew.”

The bodies of Naftali Fraenkel and Gilad Shaar, both 16, and Eyal Yifrah, 19, were found in a field near Hebron earlier this week, 18 days after they were kidnapped in the West Bank. Thousands of Israelis attended the funeral as the teens were laid to rest on Tuesday.

On Wednesday, Saed Abu Khdeir said his 17-year-old son, Mohammed, was forced into a car in an east Jerusalem neighbourhood. A burned body was found in a nearby forest hours later.

Khdeir’s family says the boy was killed by Israeli extremists out to avenge the deaths of the three teens.

“Who else could do this? There's no one else," the elder Khdeir said. He was still awaiting definitive forensic identification of his son’s body late Wednesday.

Palestinian President Mahmoud Abbas accused Jewish settlers of “killing and burning a little boy” and called on Israel to “hold the killers accountable.”

Israeli Prime Minister Benjamin Netanyahu called for a swift investigation into the “reprehensible murder” and cautioned Israelis and Palestinians against taking the law into their own hands.

Foreign Affairs Minister John Baird also issued a statement to say he is “appalled” by the killing, and said “nothing can justify such an act.

“I call for calm and caution all against vigilantism,” he said. “Canada hopes that the perpetrators of this heinous act will be swiftly brought to justice.”

Khdeir’s death sparked clashes between Palestinian protesters and Israeli forces in Jerusalem on Wednesday. No serious injuries were reported.

Fraenkel said his family is “in very deep pain” over Naftali’s murder, and does not believe claims by Hamas that it is not involved. The killings were caught on audiotape, which have been broadcast throughout Israel, he said.

“Hamas is a terrorist organization as defined by the United States and most of the European countries,” Fraenkel said. “I would think twice before I listened to what they say. I think there’s ample evidence from numerous sources on the exact names of people who did it. It’s a brutal murder.”

“Revenge is unjustified,” he said. “Anyone who takes the law into his or her own hands is doing the wrong thing.” 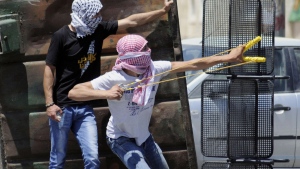 In Pictures: Violence erupts in Israel