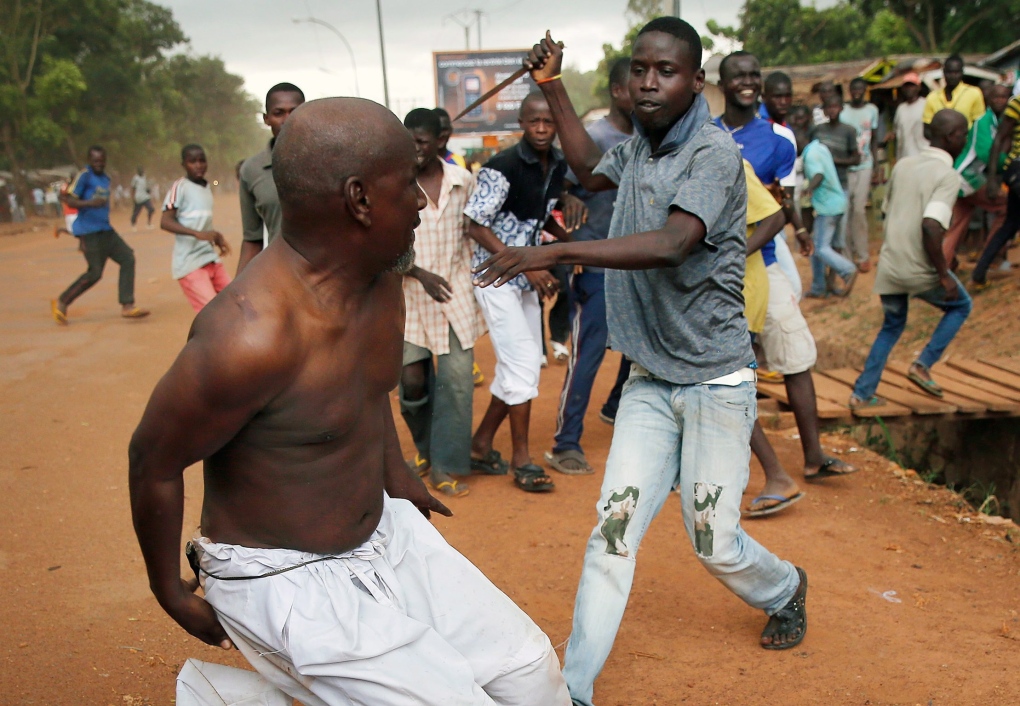 A Christian man chases a suspected Seleka officer in civilian clothes with a knife near the airport in Bangui, Central African Republic in this Monday, Dec. 9, 2013 file photo. (AP / Jerome Delay)

As widespread fighting between Muslims and Christians continues in Central African Republic, reports of cannibalism in the impoverished country have emerged.

BBC reporter Paul Wood recently spoke to a man who was part of a Christian mob that attacked and killed a Muslim passerby in the country's capital of Bangui.

Ouandja Magloire, who calls himself "Mad Dog,” said he attacked the man as revenge for the murder of his pregnant wife, his sister-in-law and her baby.

A video posted on the BBC website shows a charred and dismembered body being dragged through the streets as a group of onlookers cheer.

Witnesses said no one tried to stop the attack on the man, who was simply travelling on a minibus before he was dragged out of the vehicle by the angry mob.

Fighting between Muslims and Christians has intensified since rebel leader Michel Djotodia overthrew the president and seized control of the country in March 2013. Djotodia stepped down as president on Friday following intense regional pressure.

Inter-communal violence exploded last month, leaving more than 1,000 dead in a matter of days while nearly 1 million others fled their homes.

The UN children's agency UNICEF reported that two children have been beheaded and "unprecedented levels of violence" are being carried out on children.

UN officials have warned that CAR is on the brink of a catastrophe, with half of the country's 4.6 million being made homeless since ethnic warfare broke out.