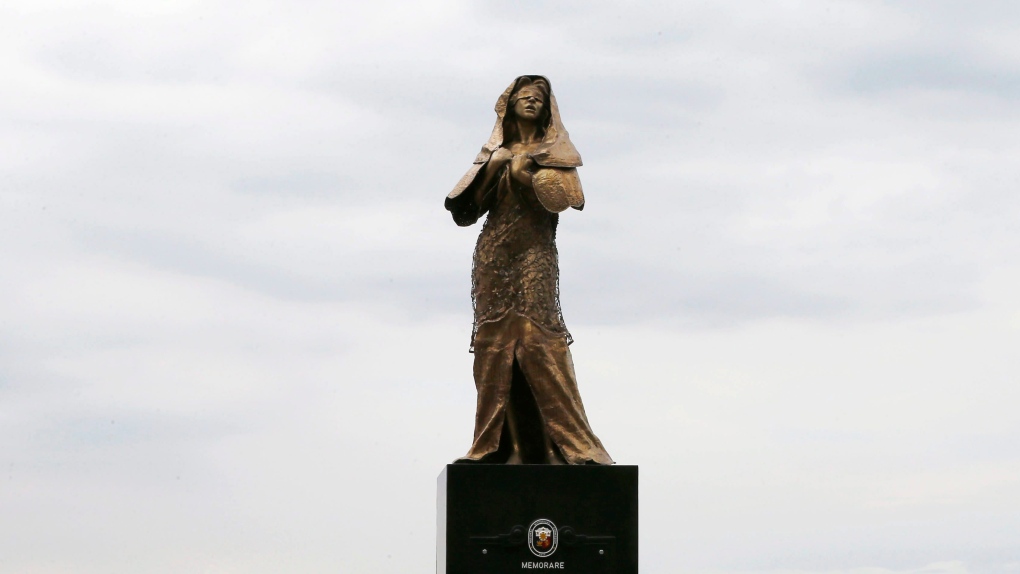 This file photo shows a statue of a "Comfort Woman" honouring Filipino sex slaves during the Second World War, which was erected along a scenic Baywalk in Manila, Philippines Thursday, Jan. 11, 2018. (AP Photo/Bullit Marquez)

MANILA, Philippines -- A statue honouring women who were forced to work in Japanese military brothels during World War II has been quietly removed from a busy seaside promenade in the Philippine capital, angering women's groups.

Manila City Hall said in a statement that the bronze statue of a blindfolded Filipina, unveiled alongside Manila Bay in December, will be returned once drainage work is completed. It gave no time frame for the project, alarming activists who suspect that the Japanese government pressured the Philippines to take the monument down.

"What happened is that we kneeled down to the Japanese. ... That's why it's shameful, so shameful," said Teresita Ang See, co-founding president of a Chinese Filipino group.

Michael Charleston "Xiao" Chua, a professor at De La Salle University in Manila, called on the public to fight to get back the statue as a symbol of national dignity.

The monument was removed Friday night.

Japan's minister for internal affairs and communications, Seiko Noda, had expressed regret over the construction of the monument in January. Japan's Kyodo News agency cited the Japanese Embassy in Manila as saying the Philippine government had notified the embassy of its intention to remove the statue.

The emotional issue of "comfort women" has provided a dilemma for the Philippines' relations with Tokyo, a major provider of aid and financing to Manila.

A National Historical Commission marker says the monument memorializes Filipinas who suffered abuses during the Japanese occupation of the Philippines from 1942 to 1945. It was built with donations from Chinese-Filipino groups and individuals.

Historians say 20,000 to 200,000 women from across Asia, many of them Koreans, were forced to provide sex to Japan's front-line soldiers. Japanese nationalists contend that the so-called "comfort women" in wartime brothels were voluntary prostitutes, not sex slaves, and that Japan has been unfairly criticized for a practice they say is common in any country at war.

In 1995, Japan provided through a private fund 2 million yen ($18,000) each to about 280 women in the Philippines, Taiwan and South Korea. However, many women in South Korea and the Philippines have demanded a full apology accompanied by official government compensation.