Remembrance and reflection: 30 years since the Montreal massacre

LONDON -- I remember it was a snowy day and we were driving back to Montreal in the fading afternoon light.

We heard a report on the radio about a shooting at Montreal’s Ecole Polytechnique and instinctively began moving in that direction. Three decades later, my memory returns only in snippets.

The wounded being rushed away to hospitals. Standing in the cold as my cameraman at the time, Bill Casey, turned his lens in whatever direction he could, filtering the tragedy through his viewfinder.

It took sometime before realizing what had happened, the understanding that only women had been shot.

What did that mean? Why only women and who was this person—this man—who killed them? Clearly deranged, but we had no sense of the hatred that fuelled his derangement.

I vaguely remember being briefed by a public affairs officer with the Montreal police, and later finding out that his own daughter Maryse was inside and had been killed.

There was no time to reflect, let alone understand the significance of what had happened. There was only a deadline and a newscast and the need to move quickly.

I was startled and then horrified by one image that appeared on a screen in our editing room. It has never gone away. At first I wasn’t sure what I was a looking at, and then I realized it was a young woman sitting in a chair, with her head slumped back. Why was she sitting there? Then I grasped the awful truth.

There were police and ambulance workers and students and journalists and family members who all rushed to the university for different reasons, but with the same need. To confirm the terrible events that would be translated into a single phrase: mass shooting. I remember a man, perhaps a father, muttering in shock: ca se peut pas. It’s not possible. This can’t be.

I have never doubted Marc Lepine’s motivation, whatever the forensic examination of his childhood might have offered as a different reason. He wanted to kill women. "I am fighting feminism," he told one of those he shot. "You're women; you're going to be engineers. You're all a bunch of feminists. I hate feminists."

Feminists, he wrote in a suicide note, had ruined his life. 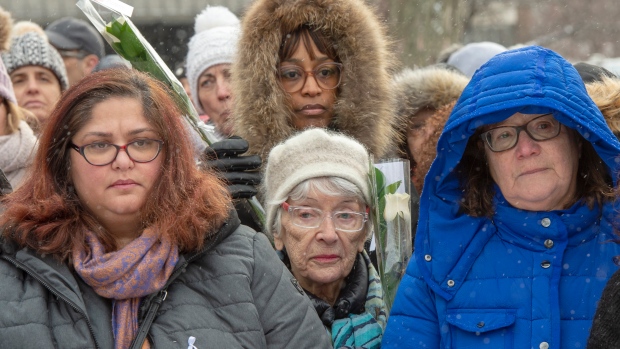 What is remarkable and uplifting is that December 6 has become a day of memory, vigilance and purpose, resistant to the advance of time. The Montreal Massacre and the names of the victims mean something vital to women. Marc Lepine represented more than just a “lone gunman” with a grudge. His misogyny was not unique; others have followed in his deadly path.

Did the world change on that day 30 years ago? I think in many ways, yes, at least part of the world. Police tactics changed. Canadian guns laws changed. Our thinking changed, at least mine did.

To realize that women as a group, in the age of liberation and greater social awareness, could be a target of hate. Not individuals—women. And they are still vulnerable. Witness the many threats of violence against women candidates in the British election.

Montreal is many years in the past. I more distinctly remember the funeral for nine of the victims at Notre-Dame Basilica five days later. A sunny day. And I remember crying.

CTV's London bureau chief Paul Workman covered the shooting at Ecole Polytechnique on Dec. 6, 1989. He shares his remembrance of covering the story and its impact, 30 years later.