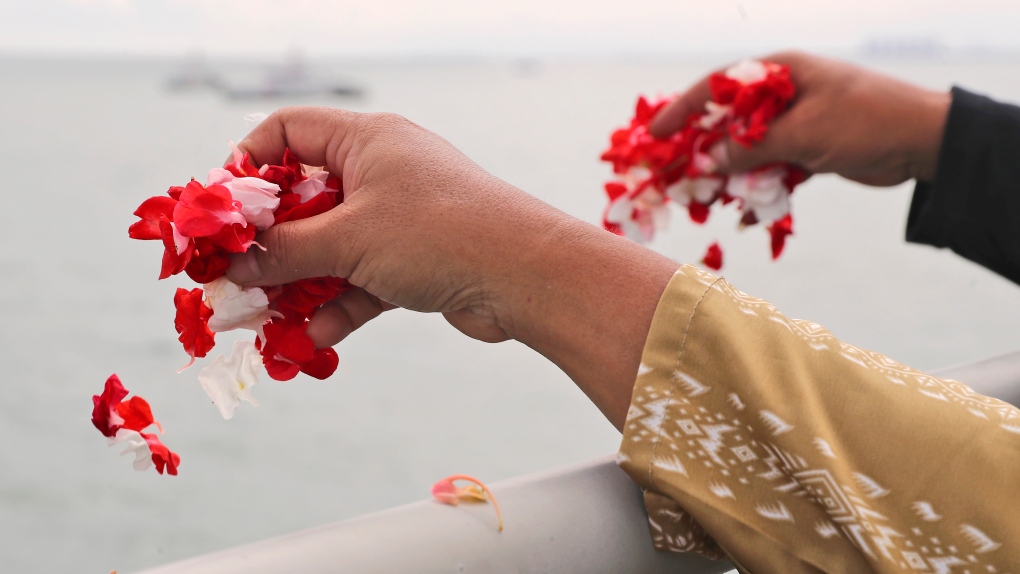 Relatives sprinkle flowers into the Java Sea where Sriwijaya Air flight SJ-182 crashed on Jan. 9 killing all of its passengers, during a memorial ceremony held on deck of Indonesian Navy Ship KRI Semarang, near Jakarta in Indonesia, Friday, Jan. 22, 2021. (AP Photo/Tatan Syuflana)

THOUSAND ISLAND, INDONESIA -- Relatives of crash victims on Friday prayed and threw flowers into the Java Sea where a Sriwijaya Air jet plunged into the water almost two weeks ago, killing all 62 people on board.

An Indonesian navy vessel took dozens of grieving relatives to the site. Many people wept as they prayed and cast flower petals into the water, and officials from the navy, search and rescue agency, and Sriwijaya Air employees threw wreaths into the sea.

The airline's president, Jefferson Irwin Jauwena, said he hoped by visiting the location to help relatives accept what happened to their loved ones and ease their grief.

"We also do feel sad and lost ... our crew, they were part of our beloved Sriwijaya Air big family," he told reporters on the ship. "I, personally, feel so devastated by this accident."

The jet nosedived into the water minutes after taking off from Jakarta, the capital, on Jan. 9. Searchers have recovered plane parts and human remains from an area between Lancang and Laki islands in the Thousand Island chain.

Those retrieval efforts ended Thursday, but a limited search is continuing for the missing memory unit of the cockpit voice recorder which apparently broke away from other parts of the device during the crash.

The flight data recorder, which tracks altitude and other parameters of the plane's flight, was recovered earlier, and investigators are working with Boeing and engine maker General Electric to review information from the device. A team from the U.S. National Transportation Safety Board and Federal Aviation Administration is part of the investigation.

The 26-year-old Boeing 737-500 was out of service for almost nine months last year because of flight cutbacks caused by the coronavirus pandemic. Regulators and the airline said it underwent inspections before resuming commercial flights in December.

Indonesia's aviation industry grew quickly after the nation's economy was opened following the fall of dictator Suharto in the late 1990s. Safety concerns led the United States and the European Union to ban Indonesian carriers for years, but the bans have since been lifted due to better compliance with international aviation standards.