Diana, Princess of Wales, spent the final summer of her life trying to recover from a broken heart, beginning an ill-advised affair with a man her friends warned her against, who would unknowingly place both her and himself into mortal danger in the backseat of a car driven by a drunk driver.

The summer of 1997 marked one year since Diana’s divorce from Prince Charles, and she was still trying to find a new path for herself. She had resigned from most of her royal patronages, choosing to focus on just a handful of the charities that meant the most to her.

As Diana tried to find her independence, she fatefully chose to give up security protection by Scotland Yard officers, CTV’s royal commentator Richard Berthelsen said.

“She had tried to carve out a new path and asked to no longer have police protection. That was a decision she made herself. Clearly, that turned out to be the wrong decision,” he told CTVNews.ca.

That summer was marked by heartache for the 36-year-old Diana, when she chose to end an 18-month relationship with British-Pakistani cardiologist Hasnat Khan -- a man with whom she was very much in love.

Dominic Lawson, whose wife Rosa Monckton was a close friend to Diana, wrote earlier this year that Diana had hoped to make a life with Khan. But the doctor didn’t think he was prepared for the media attention and worried he wouldn’t be able to continue his work.

The couple finally broke up in early July.

With her heart broken, Diana decided to accept an invitation from Harrod’s magnate, Mohamed Fayed, to bring her sons on holiday to his mansion in St. Tropez, in the south of France.

Lawson wrote that he and his wife urged Diana not to accept the invitation from Fayed, whom they didn’t trust.

Lawson said he would later learn that Fayed was obsessed with gaining connections to the Royal Family and had planned the holiday with the distinct intention of bringing Diana together with his playboy son, Dodi Fayed, in hopes they would marry.

Diana thanked her friends for their advice and then promptly ignored it, agreeing to the Fayeds’ invitation and setting out with her boys for southern France on July 11. 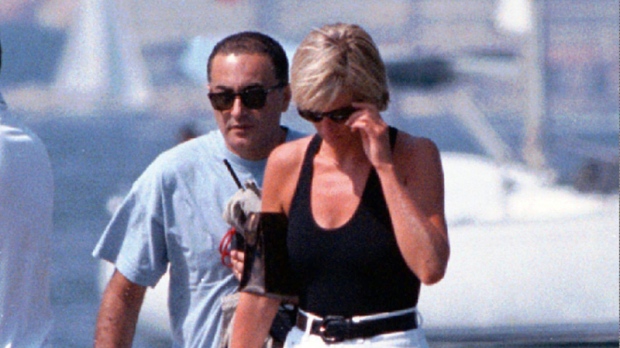 Dodi Fayed joined his family in St. Tropez, staying on a luxury yacht with his then-fiancée, Kelly Fisher. Once he began romancing Diana, the younger Fayed managed to move between his and his father’s yachts, staying with his fiancée at night while wooing Diana during the day.

Fisher would not learn of Fayed and Diana’s blossoming affair until pictures emerged of the new couple weeks later. She promptly sued Fayed for breach of contract, but dropped the suit when Fayed died.

Monckton, Diana’s friend, told the inquest into Diana’s death that she saw her friend’s affair with Fayed as merely a fling, and that it was still Khan for whom Diana really pined.

"It was clear to me that she was really missing Hasnat and that I think Dodi was a distraction from the hurt that she felt from the break-up of that relationship,” Monckton said in her testimony.

Diana even believed – correctly – that Fayed was planning to give her a ring, but she insisted to Monckton that if he did, it would be going "firmly on a finger on my right hand."

Diana’s former private secretary, Michael Gibbins, seems to agree with Monckton’s assessment and recently told The Sun newspaper that he thinks the Diana-Fayed affair was merely a fling that wouldn’t have lasted past the summer.

“I think, frankly, she was just having a lovely summer at somebody else’s expense, to be perfectly honest,” Gibbins said.

Fling or not, the ill-fated romance with Fayed escalated quickly and involved a weekend in Paris, a six-day Mediterranean cruise, and another nine-day trip to Sardinia.

It was on the Mediterranean cruise that the famous “Kiss” photos of Diana and Fayed emerged and couple’s relationship became public, whipping the paparazzi into a frenzied bid to capture more photos of the couple.

Diana’s name was in the headlines again when the French newspaper, Le Monde, published a controversial story about the princess. It claimed that in an interview, she had said that John Major’s Tory government (then recently ousted by Tony Blair’s Labour Party), had been “hopeless” in dealing with the issue of ­landmines.

Kensington Palace issued a statement denying that Diana had said those words, but the controversy made the front pages of many British newspapers and reporters were desperate to find her for comment.

Upset by the report, Diana and Fayed wrapped up their yachting trip and the pair headed for London, planning to stop first for a night in Paris.They touched down in the City of Lights, greeted by a throng of paparazzi.

Fayed’s regular driver in Paris, Philippe Dourneau, picked them up from the airport and took them -- at Fayed’s request -- for a tour of the Villa Windsor, in Paris’ Bois de ­Boulogne, which was leased at the time by Fayed’s father.

The couple then headed to the Hotel Ritz in downtown Paris -- also owned by Fayed’s father -- where they planned to stay in the hotel's Imperial Suite.

Henri Paul, acting head of security of the Paris Ritz, arrived to pick up the couple’s luggage that afternoon.  Later, Ben ­Murrell, the villa’s head of security, would report smelling alcohol on Paul’s breath.

Before dinner, Diana called her sons, William and Harry, at ­Balmoral Castle, where they were visiting with their father, Prince Charles. The boys, then aged 11 and 15, were busy playing with their cousins, Peter and Zara Phillips, and were not interested in talking long.

Prince William revealed earlier this year he and his brother are still haunted by that five-minute call.

"Harry and I were in a desperate rush to say goodbye, you know, 'See you later'," William says in the documentary, "Diana, Our Mother: Her Life and Legacy".

“If I'd known now obviously what was going to happen I wouldn't have been so blasé about it and everything else. But that phone call sticks in my mind, quite heavily."

Diana and Fayed decided to leave the Ritz, now swarming with paparazzi, so they could dine at the nearby Chez Benoit bistro at 9:45 p.m.

The couple stopped first at Fayed’s Paris apartment near the Arc de Triomphe, just a 10-minute drive away. Bodyguards Trevor Rees-Jones and Kez Wingfield rode behind in a separate car.

Driving at an estimated speed of 105 km/h – more than twice the posted speed limit of 50 km/h – Henri Paul entered the Pont de l'Alma tunnel, lost control of the vehicle and crashed into a pillar. He and Fayed died instantly.

Diana was fatally injured. First responders were able to extract her from the vehicle an hour after the crash and take her to hospital, but her internal injuries, particularly to her heart, were too extensive and she was pronounced dead at 4 a.m.

An inquest would later find that Paul had three times the legal limit of alcohol in his blood. That inquest concluded Diana was “unlawfully killed” due to the "gross negligence" of driver Paul and the paparazzi. 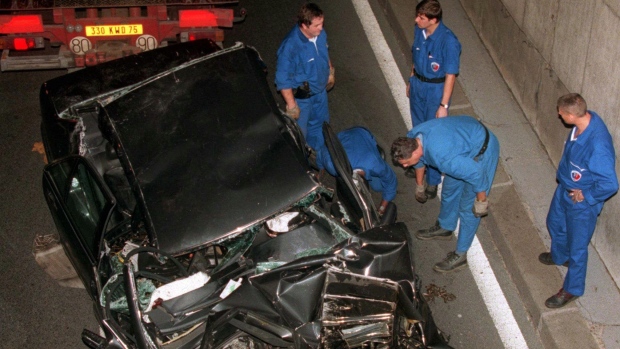 In the documentary "Diana, 7 Days," Prince Harry described the anger he still carries for the role the paparazzi played in his mother’s final hours.

"One of the hardest things to come to terms with is the people who chased her into the tunnel were the same people who were taking photographs of her while she was still dying on the back seat of the car," he said.

"And William and I know that, we've been told that numerous times by people that know that was the case. She'd had quite a severe head injury but she was very much alive on the back seat. And those people that caused the accident instead of helping were taking photographs of her dying on the back seat."

From teacher to tragic figure, the life of Princess Diana

Memorials in Britain, France pay tribute to the late Diana

The life and times of Diana, Princess of Wales

In her own words: Diana's quotes on marriage, the Royal Family and the media

From AP's archives: A sea of tears for Diana's funeral