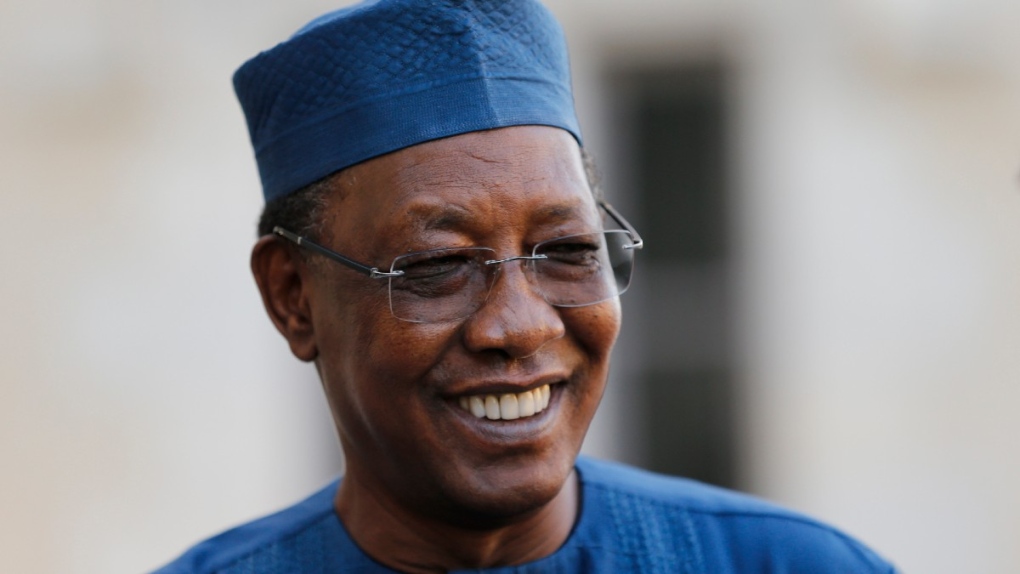 N'DJAMENA, CHAD -- Chad's president of three decades died of wounds suffered during a visit to front-line troops battling a shadowy rebel group, the military announced Tuesday, just hours after he was declared the winner of an election that would have given him another six years in power.

While the military quickly named President Idriss Deby Itno's son as the country's interim leader, the rebel group claiming responsibility for his death vowed to continue its fight for the capital -- setting the stage for a potentially bloody battle for political control of the oil-producing central African nation.

"Chad is not a monarchy. There can be no dynastic devolution of power in our country," the rebels said in a statement late Tuesday. "The forces of the Front for Change and Concord are heading toward N'Djamena at this very moment. With confidence, but above all with courage and determination."

The circumstances of Deby's death remained murky and some observers immediately questioned the events leading up to Tuesday's stunning announcement, raising the question of whether the military handing over power to Deby's son instead of following the constitutional provisions in place amounted to a coup. Others raised fears of violence in the days to come.

"There is a great deal of uncertainty around how events in Chad will unfold: Whether the army will stay loyal to Deby's son and continue the effort to repel the advancing rebels?" said Cameron Hudson with the Africa Center at the Atlantic Council.

Chadians fed up after 30 years of Deby's rule could also align with the calls for change, he said.

"Either scenario presents a high risk of civilian casualties and a likelihood that fleeing civilians or soldiers could export Chad's instability to neighbouring states."

Deby's 37-year-old son, Mahamat, is best known as a top commander of the Chadian forces aiding a U.N. peacekeeping mission in northern Mali. The military said Tuesday he now will head an 18-month transitional council following his father's death.

However, Chad's constitution calls for the National Assembly to step in when a president dies while in office.

The military called for calm, instituting a 6 p.m. curfew and closing the country's land and air borders as panic kept many inside their homes in the capital, N'Djamena.

"In the face of this worrying situation, the people of Chad must show their commitment to peace, to stability, and to national cohesion," Gen. Azem Bermandoa Agouma said.

The circumstances of Deby's death could not immediately be independently confirmed due to the remote location of the fighting.

The government has released few details of its efforts to put down the rebellion in northern Chad, though it did announce Saturday that it had "totally decimated" one rebel column of fighters.

The rebel group later put out a statement saying fierce battles had erupted Sunday and Monday. It released a list of five high-ranking military officials who it said were killed, and 10 others it said were wounded, including Chad's president.

The army only said Tuesday that Deby had fought heroically but was wounded in a battle. He was then taken to the capital where he died of unspecified wounds.

The United Nations has about 1,800 staffers in Chad and spokesperson Stephane Dujarric said in New York that the U.N. was "watching the situation hour by hour."

Some residents of the capital said they feared there was more to the story of Deby's demise.

"The rumours that are going around about the transitional council give me the impression that some information is false," Thierry Djikoloum said. "They are already talking about dissolving parliament ... So for me, I'd say it was a coup d'etat. He was killed."

Some foreign observers also questioned how a head of state could have been killed, saying it cast doubt on his protective guard. The Chadian military has only acknowledged five deaths in weekend fighting in which it said it killed 300 rebels.

Deby, former army commander-in-chief, was a major French ally in the fight against Islamic extremism in Africa, hosting the base for the French military's Operation Barkhane and supplying critical troops to the peacekeeping effort in northern Mali.

French Defence Minister Florence Parly expressed her condolences to the Chadian people, in a news conference with her German counterpart in Paris.

"What's central to us now is that a process of democratic transition can be implemented and the stability of Chad preserved," she said.

"For the rest, she added, French authorities need "a bit more time" to analyze the situation.

Chad is losing "a great soldier and a president who worked non-stop for the security of the country and the stability of the region for three decades," it said in a statement.

Deby first came to power in 1990 when his rebel forces overthrew then-President Hissene Habre, who was later convicted of human rights abuses at an international tribunal in Senegal.

Over the years Deby had survived numerous armed rebellions and managed to stay in power until this latest insurgency led by the Front for Change and Concord in Chad.

The rebels are believed to have armed and trained in neighbouring Libya before crossing into northern Chad on April 11. Their arrival came on the same day that Chad's president sought a sixth term in an election several top opposition candidates boycotted.