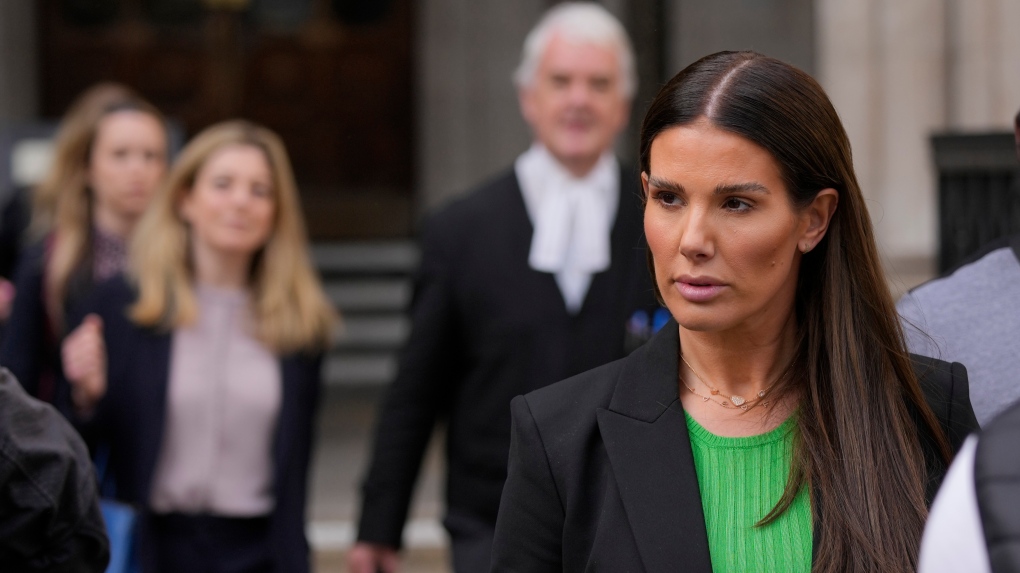 Rebekah Vardy departs the High Court in London, Thursday, May 19, 2022. A trial involving a social media dispute between two soccer spouses has opened in London. Rebekah Vardy sued for libel after Coleen Rooney accused her of sharing her private social media posts with The Sun newspaper. (AP Photo/Alastair Grant)

Vardy, 40, lost her libel claim against Rooney, 36, in July when a judge ruled that a widely circulated social media post Rooney wrote accusing Vardy of leaking her private information to the tabloid press was "substantially true."

In an order made public on Tuesday, a judge ruled that Vardy should pay 90 per cent of Rooney's legal costs.

The case, which mixed social media, an acrimonious celebrity feud and amateur sleuthing, was a British media sensation and made headlines for days. The two women are both married to famous footballers: Vardy to Leicester City and England striker Jamie Vardy, Rooney to former Manchester United and England star Wayne Rooney.

The dispute began when Rooney said she purposely posted fake stories on Instagram to find out who was passing her private information to the press. She said she blocked all accounts from seeing her Instagram stories apart from the one she suspected of being the leaker. The stories then duly appeared in The Sun.

In an October 2019 post seen by almost two million followers, Rooney revealed it was Vardy's account that was the culprit. She was dubbed "Wagatha Christie" -- a play on the slang term "WAG," for wives and girlfriends of soccer stars, and the name of crime author Agatha Christie.

Vardy launched the court battle to defend her reputation. But judge Karen Steyn said it was likely that Vardy's agent had passed Rooney's private information to The Sun newspaper, and that "Mrs. Vardy knew of and condoned this behaviour."

The national security adviser to Prime Minister Justin Trudeau says that senior officials are planning ahead for the possibility of another 'Freedom Convoy' protest in early 2023.

Alberta’s deputy premier says the proposed sovereignty act does not grant cabinet unilateral power to rewrite laws behind closed doors, but amendments may be needed to clear that up.

Only one in five Canadians are aware that a person with HIV can't sexually transmit the disease if they are taking the proper medication, according to a new survey that suggests Canadians still have a long way to go in understanding the medical and social realities of HIV.