Rare protests in Egypt call for president to step down 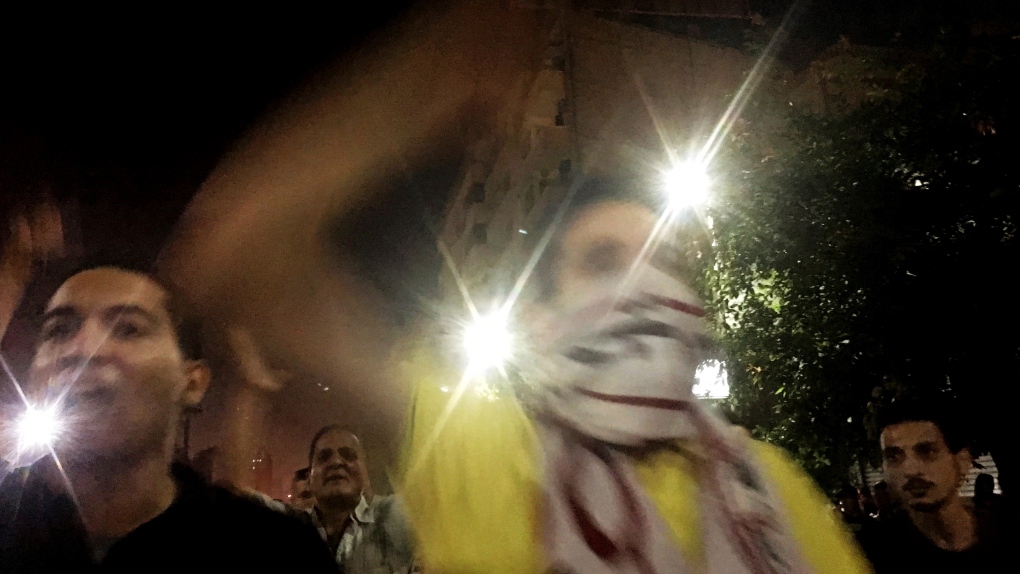 Protesters chant slogans against the regime in Cairo, Egypt, early Saturday, Sept. 21, 2019. Dozens of people held a rare protest in Cairo during which they called on Egyptian President Abdel-Fattah el-Sissi to quit. Security forces dispersed the protesters and no casualties were reported. (AP Photo/Nariman El-Mofty)

Dozens of people were arrested, including at least two journalists, according to the Egyptian Center for Economic and Social Rights. No casualties were reported.

As defence minister, he led the military's overthrow of an elected but divisive Islamist president in 2013, amid mass protests against that president's brief rule.

A subsequent sit-in by Islamists was broken up by Egyptian security forces in an operation that left hundreds dead.

Laws passed later that year effectively outlawed all public protests, although there have been a few scattered flare-ups since.

On Friday night, dozens of protesters gathered in the capital, Cairo, near Tahrir Square, the epicenter of the so-called Arab Spring uprising that toppled longtime autocrat Hosni Mubarak in 2011.

"This is a very important development because this was the first such protest against the rule of el-Sissi," said political scientist Mustafa Kamel el-Sayed of Cairo University. He said it "could lead to more protests in the future."

There were also small protests in other cities, including the Mediterranean city of Alexandria. The demonstrations came directly after a soccer game in Cairo between al-Ahly, Egypt's biggest team, and its archrival Zamalek.

The protesters were responding to a call by a self-exiled businessman who has claimed corruption by the military and government without providing evidence.

In viral social media videos posted over the past weeks, Muhammad Ali has alleged his contracting business witnessed the largescale misuse of public funds in the building of luxurious hotels, presidential palaces and a tomb for el-Sissi's mother, who died in 2014.

The allegations came as economic reforms and austerity have squeezed Egypt's lower and middle classes badly.

In a rambling speech on Tuesday, El-Sissi angrily dismissed the corruption allegations as "sheer lies." However, he said he would continue building new presidential residences for the good of Egypt. "I am building a new country," he said.

He portrayed Ali's videos as an attempt to weaken Egypt and undermine the public's trust in the military, and warned Egyptians against protesting or repeating the 2011 uprising.

Egypt has for years been battling a long-running insurgency in North Sinai that is now led by an Islamic State group affiliate. His government also has the backing of the United States and other regional heavyweights like Saudi Arabia, the United Arab Emirates and Israel.

"President al-Sissi's security agencies have time and again used brutal force to crush peaceful protests," said Michael Page, deputy Middle East and North Africa director at HRW. "The authorities should recognize that the world is watching and take all necessary steps to avoid a repetition of past atrocities."

Egyptian authorities did not immediately comment on the protests. El-Sissi was in New York Saturday to attend the United Nations summit meetings, the state-run MENA news agency reported.

El-Sissi was elected president in 2014, and re-elected last year after all potentially serious challengers were either jailed or pressured to exit the race.

Changes to the country's constitution allowed el-Sissi to remain in power until 2030. The changes, which was adopted earlier this year in a national referendum, also further enshrined the military's role in politics. These moves are seen by critics as another step back toward authoritarianism.

Later Saturday, the Interior Ministry, which oversees the police, said security forces had killed a suspected militant leader from the Hasm movement. It said two police officers were also wounded in the shootout in northern Cairo's el-Mataria neighbourhood.