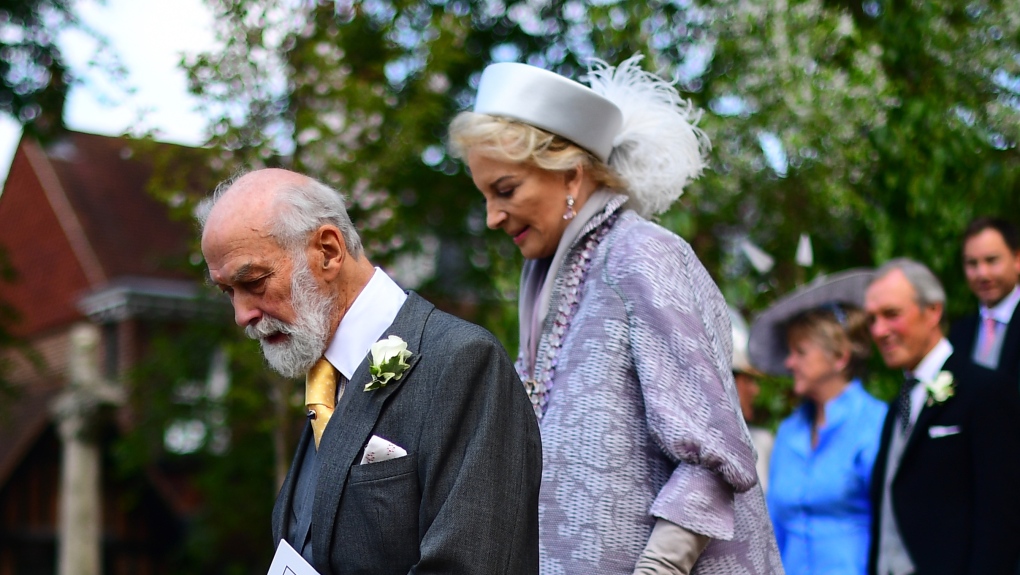 Prince Michael of Kent, Queen Elizabeth's first cousin, can be seen in this image. (VICTORIA JONES/AFP/POOL/AFP via Getty Images)

Prince Michael of Kent, Queen Elizabeth's first cousin, said Sunday that he "has no special relationship" with Russian President Vladimir Putin after an undercover journalistic investigation claimed he and a close friend were "secretly trading on their links" with Putin for profit.

The report centers around undercover recordings of a Zoom meeting involving Prince Michael, his friend and business partner Simon Isaacs -- whose title is the Marquess of Reading -- and two undercover journalists posing as executives of a fake South Korean company that invests in gold.

The investigation by the UK's Sunday Times and Channel 4 does not allege Prince Michael or Isaacs took part in any illegal activity.

According to The Sunday Times, their undercover reporters claimed the fictitious South Korean company "was looking to hire a royal to market its investment service" and wrote in a letter that it "was planning to set up a Moscow office and offered to hire the prince as an adviser to use his 'excellent contacts' in Russia."

"I've traveled extensively around Russia for many different reasons, but mainly on business," the prince told the undercover journalists on a Zoom call, clips of which were posted by The Sunday Times.

Prince Michael is a first cousin of Queen Elizabeth II and has often appeared alongside her during royal engagements. His maternal and paternal grandfathers are first cousins of Czar Nicholas II and he has been visiting Russia since the collapse of the Soviet Union in 1992, according to his website.

"Prince Michael has long established business, charitable and cultural connections with Russia and is proud of all the work he has done for UK-Russia trade," a statement from his spokesperson said.

He speaks Russian, is patron of the Russo-British Chamber of Commerce and in 2009 was "presented with the Order of Friendship from President (Dimitri) Medvedev, one of the highest orders in Russia, for his work on Anglo-Russo relations," his website said.

In the same video published by The Sunday Times of the Zoom call with the undercover reporters, Prince Michael leaves the call, but Isaacs continues the meeting and appears to promise access to President Vladimir Putin and his associates.

Referencing the name of the fake South Korean company, Isaacs says on the video: "If (Prince Michael) is representing the House of Haedong, he could mention that to Putin and Putin would find the right person who is interested in South Korea or interested in gold. It just opens the door, you know, which is so helpful."

Prince 'has no special relationship' with Putin

The prince's spokesperson said in a statement: "Prince Michael has no special relationship with President Putin. They last met in 2003 and he has had no contact with him or his office since then."

"Lord Reading is a good friend, who made suggestions which Prince Michael would not have wanted, or been able, to fulfill," the spokesperson added.

In the Zoom call after the prince had left the meeting, Isaacs goes on to say that, in Russia, the prince is "not seen as political" and is seen as "a friend of Russia."

He adds that Prince Michael is highly regarded due to his "royal family heritage" and that "he is just generally regarded as Her Majesty's unofficial ambassador to Russia."

The statement also added that "Prince Michael receives no public funding and earns his own living through a consultancy company that he has run for over 40 years. Their Royal Highnesses pay a market rent and fees for their home at Kensington Palace."

In a statement to The Sunday Times, the Marquess of Reading said, "I made a mistake and overpromised and for that, I am truly regretful."