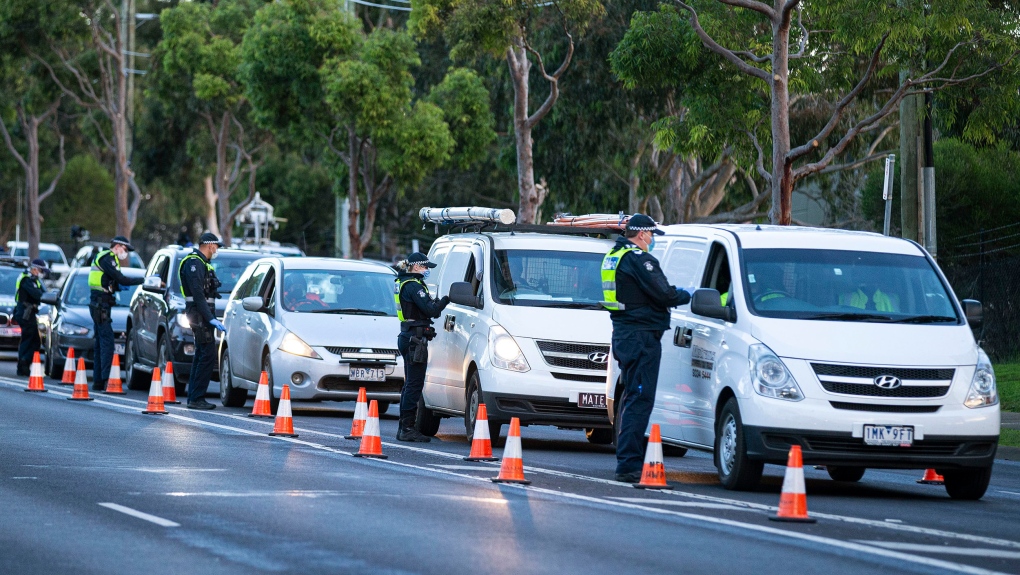 Police check drivers at a roadblock in suburban Melbourne, Australia on July 2, 2020. Thousands of residents in dozens of suburbs are preparing to lock down for a month. (Daniel Pockett/AP)

Australian officials have launched a judicial inquiry amid allegations a fresh coronavirus outbreak in the state of Victoria was sparked by some contracted workers not following protocols at a hotel used to quarantine international arrivals -- including reportedly having sex with people under lockdown.

Premier Daniel Andrews announced Thursday that the state government would provide $3 million to support the inquiry. He has previously said a number of cases in late May and early June could be linked to "an infection control breach in the hotel quarantine program."

Authorities have commandeered a number of hotels across the country as part of its strict border controls to control the spread of the coronavirus. Anyone who arrives in Australia must undertake a 14-day mandatory quarantine at the facilities, which are managed by the government.

Only Australian citizens and permanent residents are allowed into the country, with a few exceptions.

"It is abundantly clear that what has gone on here is completely unacceptable and we need to know exactly what has happened," Andrews said in the statement.

According to CNN affiliate 9 News, the alleged breaches include claims some workers had sex with guests in isolation, and a lack of training for the guards. A contracted security guard told the broadcaster's Today show that he received just five minutes of training before starting the job.

Officials have not confirmed the allegations, and CNN has reached out to the Victorian Department of Health and Human Services -- which manages quarantines in the state -- for comment. In an interview with CNN affiliate Channel Seven on Thursday, Australia's Minister for Health, Greg Hunt, said: "There are two cases where it appears that there have been clear breaches with significant ramifications."

When asked what he made of allegations that security officers were sleeping with guests in quarantine, Hunt said: "If those statements are true, that would be completely and utterly unacceptable."

"We would encourage the Victorian authorities to throw the book at them if any of these individuals or the firms have behaved inappropriately."

Victoria has experienced a fresh outbreak of coronavirus cases in recent weeks, prompting authorities to impose a fresh lockdown in parts of Melbourne. The state reported 73 new cases Wednesday, bringing its active cases to 370.

Andrews said no international travelers will be allowed into Melbourne for the next two weeks while the quarantine program is reset under the supervision of Corrections Victoria, which run the state's jails.

More than 60,000 Australians have come home and gone through the hotel quarantine system, Hunt said.