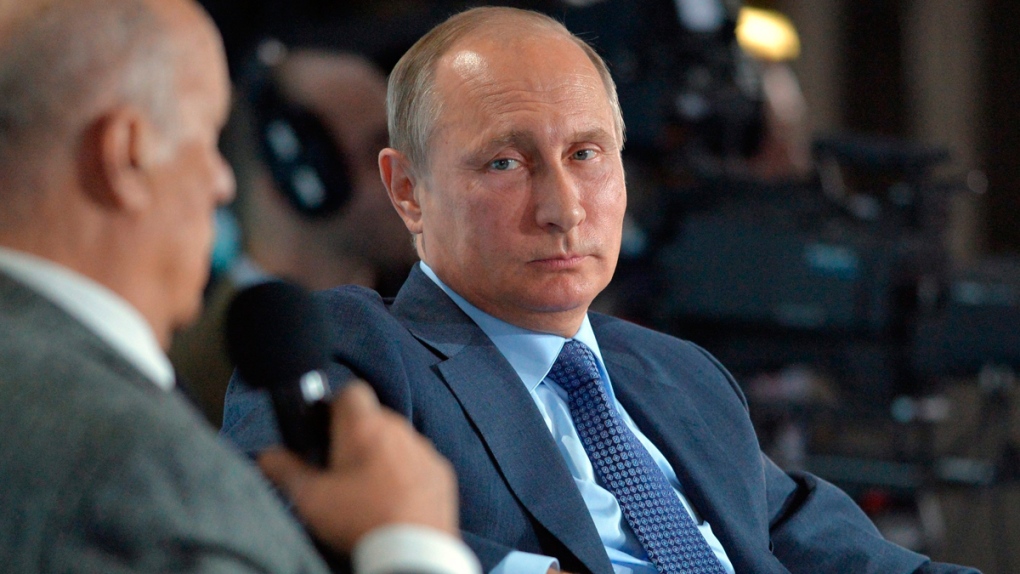 MOSCOW -- President Vladimir Putin on Thursday dismissed claims that Russia is interfering in the U.S. presidential election, saying the allegations are designed to distract the public from real issues.

The United States has accused Russia of co-ordinating the hacks of Hillary Clinton's campaign emails to influence the outcome of the election.

Speaking to international foreign policy experts in Sochi, Putin dismissed "the hysteria about Russia's influence on the U.S. presidential election."

He argued that U.S. elites have used the "mythical and fictitious" issue to distract attention from real problems such as government debt and police violence.

"Does anyone seriously think Russia can somehow influence the American people's choice?" Putin said. "Is America some kind of banana republic? America is a great power!"

Putin called the claim that Russia favours Republican contender Donald Trump in the race as "sheer nonsense" that has served as a campaign tool. "It's just an instrument of political struggle, a way of manipulating public opinion," he said.

The Russian leader added that while Trump may sound "extravagant," he was trying to reach out to people who are tired of elites, and "time will tell how efficient it is for him."

"We don't know how Trump or Clinton will behave, what they will or will not deliver," he said. "We feel more or less indifferent about it."

Putin added that it's not clear what stance the next U.S. president will take toward Russia, but added that Moscow welcomes campaign statements about normalizing ties.

"We will work with any president who will be elected by the American people," he said.

Speaking Wednesday evening at the University of Chicago Institute of Politics, U.S. Secretary of State John Kerry insisted that Washington has no doubts of direct Russian involvement in the hacking.

He also said separately in a CNN podcast that "the goal is to be disruptive, to interfere with our system, and be as annoying as people feel it is."

Kerry said he has confronted Russian counterparts such as Foreign Minister Sergey Lavrov on the matter.

"Their response is to demand the evidence and to ask for it," he said. "And my response to that is, 'Let's not be foolish here. You know what we're talking about."'

Putin also asserted Thursday that the rise of popularity of nationalist parties in Europe was rooted in a widening gap between elites and the regular citizens, not the influence of Russian propaganda as many in the West have suggested.

He also shrugged off allegations that Russia harbours aggressive military intentions in Europe.

"Of course, it's quite pleasant and sometimes advantageous to cast oneself as a defender of civilization from some kind of new barbarians, but Russia has no intention to attack anyone," Putin said. "It's plain ridiculous."

Relations between Russia and the West have plummeted to their lowest point since the Cold War era over Ukraine and Syria.

The U.S. and the European Union have imposed economic sanctions on Russia in response to its annexation of Ukraine's Crimean Peninsula and support for a pro-Russia insurgency in eastern Ukraine.

The U.S. and its NATO allies are deploying forces in the Baltics and Poland in response to Russia's moves. Moscow has described the deployments as a threat to its security and pledged to respond in kind.

Amid the tensions, NATO complained that Russian warplanes fly with the transponders that would allow them to be identified switched off, jeopardizing civilian flights.

Putin said Thursday that he backed a Finnish proposal for both Russian and NATO aircraft to have their transponders switched on while flying over the Baltics, but added that the alliance turned it down earlier this year.

Putin defended Russia's support for the Syrian army's siege of the rebel-held eastern districts of the city of Aleppo, saying it's necessary to crush the militants there.

Putin said there is choice between "keeping a terrorist nest there or crushing that nest while minimizing civilian casualties." He shrugged off the calls to end the onslaught on Aleppo, arguing that the U.S.-backed, Iraqi-led siege of Mosul should also be halted then, and the prospective attack on Raqqa by the U.S.-led coalition should not be launched at all.

He voiced regret about a quick collapse last month of a cease-fire in Syria brokered by Russia and the U.S. and blamed unidentified forces in Washington for wrecking it.

"It's very difficult to talk to the current administration, because it doesn't fulfil any agreements, including on Syria," Putin said. He added that Washington failed to deliver on its pledge to persuade the U.S.-backed rebels to rupture ties with the al-Qaida branch in Aleppo and then blamed Russia for the demise of the truce.

He noted that Russia has observed a new moratorium on airstrikes on Aleppo since last Tuesday, the U.S. still hasn't moved to divide the rebels from al-Qaida-linked militants.

"If we agree on something, it's necessary to honour the agreement and, at the very least, not try to shift blame and accuse us of all deadly sins," he said. "It's just unseemly. We have shown restraint and haven't responded in the same boorish manner, but there are limits to that and we may respond in kind."

Bradley Klapper in Washington contributed to this report.