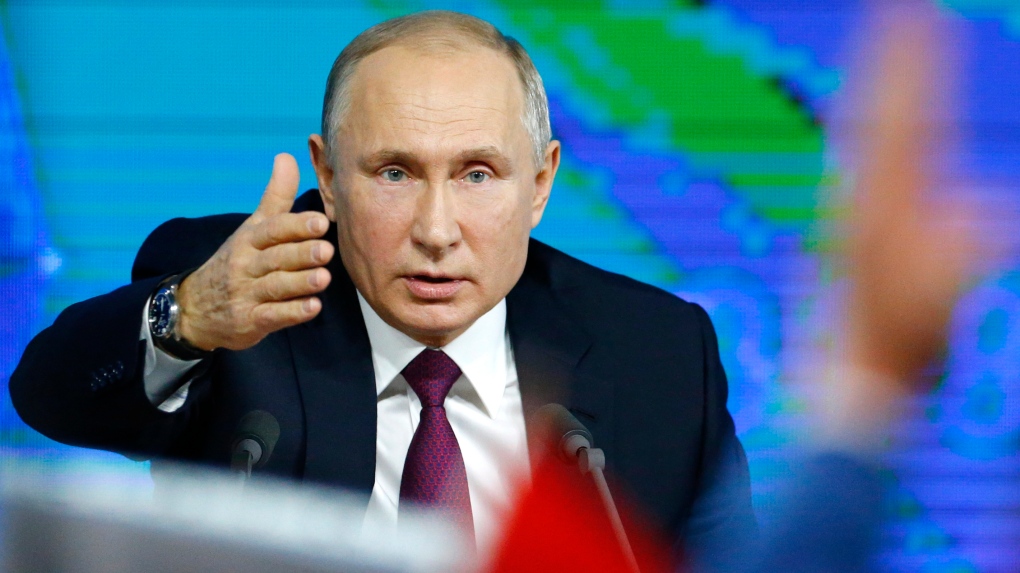 MOSCOW -- Russian President Vladimir Putin issued a chilling warning Thursday about the rising threat of a nuclear war, putting the blame squarely on the U.S., which he accused of irresponsibly pulling out of arms control treaties.

Speaking at his annual news conference, Putin warned that "it could lead to the destruction of civilization as a whole and maybe even our planet."

He pointed at Washington's intention to walk away from the 1987 Intermediate-Range Nuclear Forces Treaty, or INF, and its reluctance to negotiate the extension of the 2010 New START agreement, which expires in 2021 unless the two countries agree to extend it. "We are witnessing the breakup of the arms control system," he said.

Moscow and Washington have been at loggerheads over the INF, which bans an entire class of weapons -- all nuclear and conventional ground-launched ballistic and cruise missiles of intermediate range. U.S. officials say Washington's withdrawal from the pact was prompted by Russian violations of the treaty, which Moscow vehemently denies.

Earlier this month NATO, at U.S. request formally declared Russia to be in violation of the INF and demanded that it halt activity that breaches it. The move put the full weight of the alliance behind the U.S., which has given Russia until February to come into compliance or trigger Washington's withdrawal from the treaty."

Officials in both Russia and the U.S. have given mixed signals about the future of the New START treaty, signed by President Barack Obama and then-Russian President Dmitry Medvedev amid a brief thaw in Russia-U.S. ties. U.S.-Russian strategic nuclear weapons -- those capable of striking each other's territory -- are governed by New Start.

During the nearly four-hour news conference, Putin maintained Russia was not interested in "gaining unilateral advantages. We aren't seeking advantages, we are trying to preserve the balance and ensure our security."

Russia-U.S. ties have sunk to their lowest levels since the Cold war times over the Ukrainian crisis, the war in Syria and the allegations of Russian meddling in the 2016 U.S. presidential election, among other disputes.

The U.S. and European nations have repeatedly called out Russia and imposed sanctions on it for its support of separatists in eastern Ukraine and its annexation of Crimea in 2014. At the same time the West has harshly criticized Russia for its military and political support for Syrian President Bashar Assad, which U.S. officials say has prolonged the war in Syria and the suffering of its people.

The Russian leader scoffed at the allegations, rejecting them as part of a smear campaign driven by domestic policy in the U.S. and elsewhere in the West.

He dismissed claims that Russia is interfering abroad, from a nerve agent poisoning in Britain to an alleged effort to infiltrate the U.S. National Rifle Association, charging that those accusations are part of U.S.-led efforts to malign Russia to strengthen the Western allies' unity.

"They need an external threat to cement NATO unity," Putin said, accusing the U.S. and its allies of exploiting "phobias of the past" to achieve domestic political goals.

"As for ruling the world, we know where the headquarters trying to do that are located, and the place isn't Moscow," he said, noting that the Pentagon's annual budget of over $700 billion dwarfs Russia's defence spending of $46 billion.

Russia's hopes for repairing ties with the U.S. under President Donald Trump have fizzled amid the allegations of Russian meddling in the 2016 election -- charges Putin has denied.

He noted that he's still keeping the door open for a meeting with Trump, but added that the prospect for that looks increasingly dim in view of the Democrats winning control of the House.

"You can predict new attacks on the president with 100-per cent probability," Putin said. "I don't know if he could engage in a direct dialogue with Russia in such conditions."

He charged that that the continuing U.S. political infighting reflects a "lack of respect for the voters" who elected Trump. "They don't want to acknowledge his victory and do everything to delegitimize the president," Putin added.

He insisted that a Russian woman in U.S. custody has not carried out any mission for the Russian government, even though she pleaded guilty this month to acting as a covert agent of the government. Putin claimed that Maria Butina -- accused of trying to infiltrate the NRA and American conservative circles around the time of Trump's election -- entered the guilty plea because of the threat of a long prison sentence in the case, which Putin described as fabricated.

Amid a litany of complaints over Washington's policies, Putin had one positive thing to say about the United States: He welcomed Trump's decision to withdraw the U.S. military from Syria.

The U.S. "has done the right thing," Putin said, reaffirming the long-held Russian argument that the U.S. presence in Syria is illegitimate because it wasn't vetted by the U.N. Security Council or approved by Syrian President Bashar Assad's government. The pullout is also likely to strengthen Russia's role in Syria's future.

He showed no sign of backing down from Russia's stance on Ukraine, accusing his Ukrainian counterpart of provoking a naval standoff with Russia to boost his electoral prospects. The Russian coast guard fired upon and seized three Ukrainian naval vessels and 24 seamen when they tried to sail from the Black Sea into the Sea of Azov in what the U.S. and its NATO allies condemned as unjustified use of force by Russia.

Turning to nuclear weapons, Putin warned that if the U.S. puts intermediate-range missiles in Europe after its planned exit from the INF Treaty banning them, Russia will be forced to take countermeasures.

As for what he described as U.S. reluctance to extend the New START nuclear arms reduction treaty, he said: "You aren't interested? You don't need it? OK, we will survive. ... But it will be very bad for the whole of humankind, because it would take us to a very dangerous area."