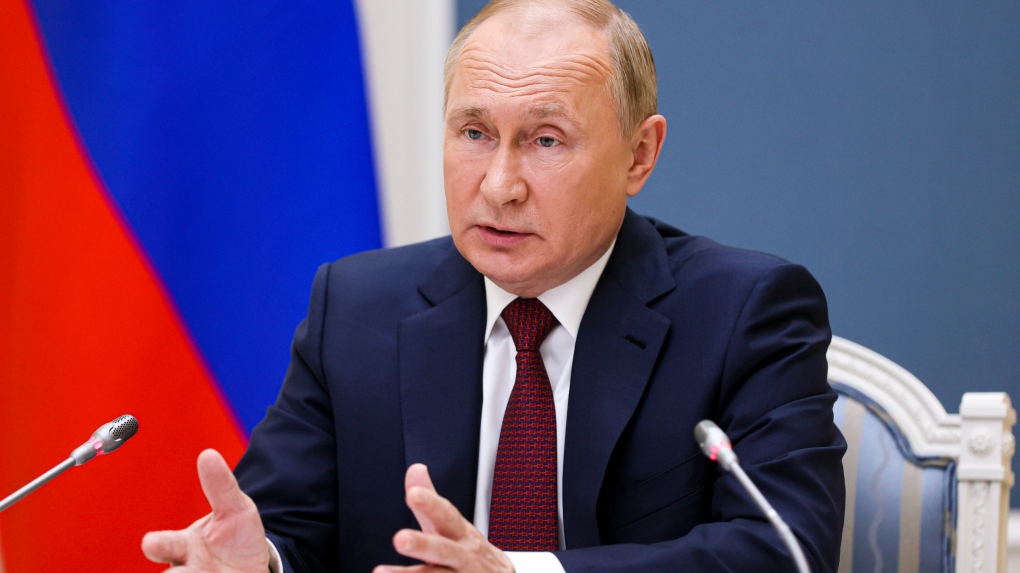 MOSCOW -- President Vladimir Putin said Wednesday that Moscow would seek Western guarantees precluding any further NATO expansion and deployment of its weapons near his country's borders, a stern demand that comes amid fears of a Russian invasion of Ukraine.

Ukrainian and Western officials have worried about a Russian troop buildup near Ukraine, saying it could signal Moscow's intention of an attack. Russian diplomats countered those claims by expressing concern about Ukraine's own military buildup near the area of the separatist conflict in the eastern part of the country.

U.S. Secretary of State Antony Blinken, noting that Putin could quickly order an invasion of Ukraine, warned that Washington stands ready to inflict heavy sanctions on Russia if he does.

Speaking at a Kremlin ceremony where he received credentials from foreign ambassadors, Putin emphasized that Russia will seek “reliable and long-term security guarantees.”

“In a dialogue with the United States and its allies, we will insist on working out specific agreements that would exclude any further NATO moves eastward and the deployment of weapons systems that threaten us in close vicinity to Russian territory,” Putin said.

He charged that “the threats are mounting on our western border,” with NATO placing its military infrastructure closer to Russia and offered the West to engage in substantive talks on the issue, adding that Moscow would need not just verbal assurances, but “legal guarantees.”

“We aren't demanding any special conditions for ourselves and realize that any agreements must take interests of Russia and all Euro-Atlantic countries into account,” Putin said. “A calm and stable situation must be ensured for all and is needed for all without exclusion.”

Putin's statement came a day after he sternly warned NATO against deploying its troops and weapons to Ukraine, saying it represented a red line for Russia and would trigger a strong response.

Tensions have been soaring in recent weeks about a Russian troop buildup near Ukraine, which worried Ukrainian and Western officials, who saw it as a possible sign of Moscow's intention to invade its former Soviet neighbor. NATO foreign ministers warned Russia on Tuesday that any attempt to further destabilize Ukraine would be a costly mistake.

The Kremlin insists it has no such intention and has accused Ukraine and its Western backers of making the claims to cover up their own allegedly aggressive designs.

Russian Foreign Minister Sergey Lavrov said the concentration of Ukrainian troops looks “alarming,” adding that he was going to raise the issue during a ministerial meeting in Stockholm of the Organization for Security and Cooperation in Europe on Thursday. He again assailed Ukraine for failing to meet its obligations under a 2015 peace deal for the region that was brokered by France and Germany and signed in Minsk, Belarus.

“Kyiv is becoming increasingly insolent in its aggressiveness towards the Minsk agreements, the Russian Federation, and in its attempts to provoke the West to support its military ambitions,” Lavrov said in remarks in the upper house of Russia's parliament before heading to a meeting with Blinken on the sidelines of the OSCE meeting.

Speaking Wednesday in Riga, Latvia, Blinken said that “we don't know whether President Putin has made the decision to invade.”

“We do know that his is putting in place the capacity to do so on short order should he so decide,” Blinken told reporters. “We must prepare for all contingencies.”

The U.S. has “made it clear to the Kremlin that we will respond resolutely, including with a range of high-impact economic measures that we've refrained from using in the past,” he said.

Blinken gave no details on what kind of sanctions were under consideration if Russia did invade Ukraine.

In April, the European Parliament approved a nonbinding resolution to cut off Russia from the so-called SWIFT system of international payments if its troops entered Ukraine. Such a move would go far toward blocking Russian businesses from the global financial system, even though Moscow has developed its own parallel system in preparation for such a move.

Western allies reportedly considered such a step during earlier escalations of tensions over Russia's actions regarding Ukraine. In 2019, then-Russian Prime Minister Dmitry Medvedev warned that cutting Russia off SWIFT would effectively amount to a “declaration of war.”

Russian Foreign Ministry spokeswoman Maria Zakharova said Ukraine has amassed about 125,000 troops - about half of the size of its military - near the conflict zone. She also pointed at an increasing number of violations of a cease-fire in the east.

Amid the tensions, Moscow on Wednesday launched drills in southwestern Russia involving over 10,000 troops. A smaller exercise also began in Russia's westernmost region of Kaliningrad on the Baltic, involving 1,000 personnel from armored units.

Russia annexed Ukraine's Crimean Peninsula in 2014 after the country's Kremlin-friendly president was driven from power by mass protests. Moscow also threw its weight behind a separatist insurgency in Ukraine's eastern industrial heartland, known as the Donbas. More than 14,000 people have died in the fighting.

Ukraine and the West accused Russia of sending its troops and weapons to back the rebels. Moscow denied that, charging that Russians who joined the separatists were volunteers.

In Wednesday's address to parliament, Ukrainian President Volodymyr Zelenskyy called for negotiations with Russia to end the conflict in the east.

“We must tell the truth - we wouldn't be able to stop the war without direct talks with Russia,” Zelenskyy said. “We aren't afraid of a direct dialogue.”

About 2,000 people rallied Wednesday in Kyiv to demand Zelenskyy's resignation, calling his words “a betrayal of national interests.” The demonstrators also demanded the ouster of Andriy Yermak, who heads the Presidential Office, and other allies of Zelenskyy, describing them as “Russia's agents of influence.”

“We will not allow this government to turn Ukraine into Russia's province again,” said Oleksandr Turchynov, a former parliament speaker and acting president of Ukraine in 2014, and now a top official of the European Solidarity party, founded by Zelenskyy's predecessor, Petro Poroshenko.

The Kremlin responded to Zelenskyy's remarks by reaffirming its long-held stance that Russia isn't a party to the conflict, describing the fighting in the east as a civil war.

“The war in Donbas is Ukraine's internal business,” Kremlin spokesman Dmitry Peskov told reporters. “We know about the attempts to cast Russia as a party to the conflict, but it's not so. It's only possible to end the war in Donbas through talks between Ukrainians.”

Peskov said the Ukrainian troop concentration in Donbas could herald an attempt by Kyiv to reclaim control of the rebel-held territory.

“It makes us worry that inclinations to solve the Donbas problem by force could prevail,” he said. “It's a very dangerous adventurism.”