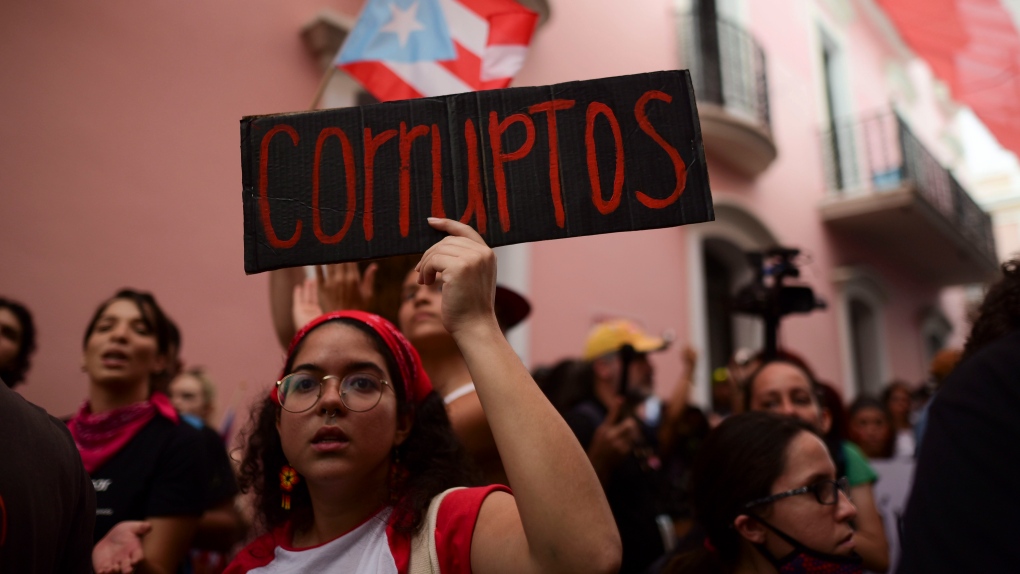 A young woman holds a sign that reads in Spanish "Corrupt" while protesting outside the executive mansion known as La Fortaleza, in Old San Juan, demanding the resignation of Governor Wanda Vazquez after the discovery of an old warehouse filled with unused emergency supplies in San Juan, Puerto Rico, Monday, Jan. 20, 2020. (AP Photo/Carlos Giusti)

Puerto Ricans poured into the streets of San Juan on Monday calling for the resignation of Gov. Wanda Vazquez.

The protests come days after Hurricane Maria supplies were found in a warehouse over the weekend in the city of Ponce, on Puerto Rico's southern coast. They included numerous pallets of water and other boxes with emergency supplies. The discovery took place as the U.S. territory struggles with tremors and aftershocks from a December earthquake.

Protesters were seen Monday banging pots outside the governor's mansion in San Juan.

Vazquez took to Twitter hoping to quell the outrage among citizens.

"I respect the constitutional right of citizens to demonstrate," she said. "There is no need for the use of the shock force at this time."

The protests were reminiscent of what took place in Puerto Rico last summer when protesters filled the street demanding the resignation of then-Gov. Ricardo Rossello, who resigned in August.

The supplies were sent to the 18 municipalities included on the White House's disaster declaration, Reyes said.

"Most of the water here and baby formula is outdated. There are cots, camping stoves, blue tarps," Reyes said. "The expired items will be disposed of."

While the supplies were reported to be from Hurricane Maria, Reyes could not confirm the purpose of the supplies, saying he did not want to speculate because there was no inventory for the items.

Vazquez fired three officials within 24 hours of the supplies being found.

Carlos Acevedo, the director of Puerto Rico's Office of Emergency Management, was dismissed Saturday. Acevedo was replaced by Nino Correa, the governor said.

Sunday, Vazquez announced the dismissal of her secretary of family services, Glorimar Andujar, and secretary of housing, Fernando Gil-Ensenat.

Vazquez on Monday referred the investigation into the warehouse to the island's Department of Justice.

December's earthquake has left more than 8,000 people living in outdoor shelters in the cities of Yauco, Penuelas, Guanica, Guayanilla and Ponce. Some of those displaced are residents who are too afraid to return home for fear a wall or roof will collapse.