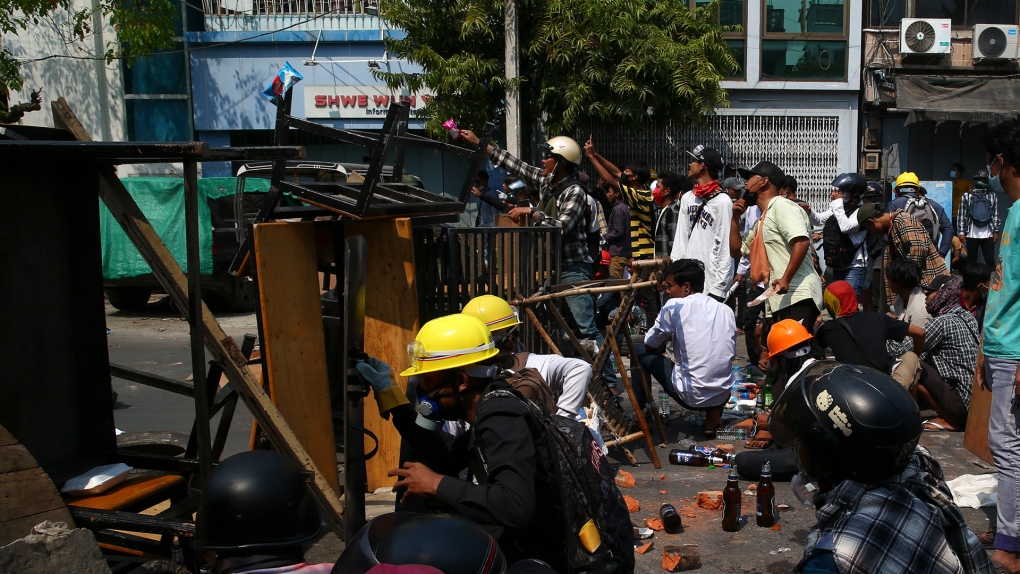 Protests were reported Saturday morning in the country's biggest city, Yangon, where stun grenades and tear gas were used against demonstrators. On Wednesday, 18 people were reported killed there.

Protests also took place in several other cities, including Mandalay, the second-biggest city, Myitkyina, the capital of the northern state of Kachin, Myeik in the far south, where police fired tear gas at students, and Dawei in the southeast, where tear gas was also used.

Demonstrators in the city of Monywa poured cans of beer over their feet and those of passers-by to show their contempt for the brewery's owners -- the military. Myanmar Beer is one of a number of business concerns in the country that are linked to the generals and has seen its sales plummet in the weeks following the coup. It's also lost its Japanese partner, Kirin, which announced it was pulling out of the joint venture as a result of the power grab.

Officials are believed to have exhumed the body of a young woman who was killed during Wednesday's suppression of protests in Mandalay. The woman, Kyal Sin, had been photographed taking part in the protests before her death, and images of her on the front lines have made her a high-profile martyr.

Security forces on Friday night sealed off the cemetery where she was buried, and when residents visited in the morning, her grave was freshly plastered over and shovels and other evidence of digging were found at the site. There was no official explanation of the incident, but media close to the military had earlier reported that the authorities had questioned the conclusion that she had been shot dead by police, and intended to investigate.

The escalation of violence has put pressure on the world community to act to restrain the junta, which seized power on Feb. 1 by ousting the elected government of Aung San Suu Kyi. The coup reversed years of slow progress toward democracy in Myanmar, which for five decades had languished under strict military rule that led to international isolation and sanctions.

Suu Kyi's National League for Democracy party led a return to civilian rule with a landslide election victory in 2015, and with an even greater margin of votes last year. It would have been installed for a second five-year term last month, but instead Suu Kyi and President Win Myint and other members of the government were placed in military detention.

Large protests have occurred daily across many cities and towns, and security forces have responded with greater use of lethal force and mass arrests. At least 18 protesters were shot and killed last Sunday and 38 on Wednesday, according to the UN Human Rights Office. More than 1,000 have been arrested, the independent Assistance Association for Political Prisoners said.

UN special envoy for Myanmar Christine Schraner Burgener said in her briefing to Friday's closed Security Council meeting that council unity and "robust" action are critical "in pushing for a stop to the violence and the restoration of Myanmar's democratic institutions."

"We must denounce the actions by the military," she said. "It is critical that this council is resolute and coherent in putting the security forces on notice and standing with the people of Myanmar firmly, in support of the clear November election results."

She reiterated an earlier appeal to the international community not to "lend legitimacy or recognition to this regime that has been forcefully imposed, and nothing but chaos has since followed."

Any kind of co-ordinated action at the UN will be difficult because two permanent members of the Security Council, China and Russia, are likely to veto it.

Earlier in the week, Schraner Burgener warned Myanmar's army that the world's nations and the Security Council "might take huge, strong measures."

"And the answer was, `We are used to sanctions, and we survived those sanctions in the past,"' she said. When she warned that Myanmar would become isolated, Schraner Burgener said "the answer was, `We have to learn to walk with only a few friends."'

A decree issued by the junta and published in state media Friday increased the potential costs of opposition, declaring that members of a self-styled alternative government formed by elected lawmakers whom the army barred from taking their seats were committing high treason, which is punishable by death.

The Committee Representing Pyidaungsu Hluttaw, Myanmar's Parliament, wants foreign countries and international organizations to recognize it instead of the junta. It also claims to have won the loyalty of local bodies inside Myanmar. The junta's announcement said that people who collude with the committee would be subject to seven years' imprisonment.

The statement came after video from a surveillance camera that was circulated widely on social media showed members of an ambulance crew in Yangon being savagely beaten after they were taken into custody by police on Wednesday.

"We express profound sadness that Myanmar Red Cross volunteers have been injured while on duty providing lifesaving first aid treatment to wounded people, in line with fundamental principles of humanity, neutrality and impartiality. Red Cross volunteers should never be targeted," the federation said.