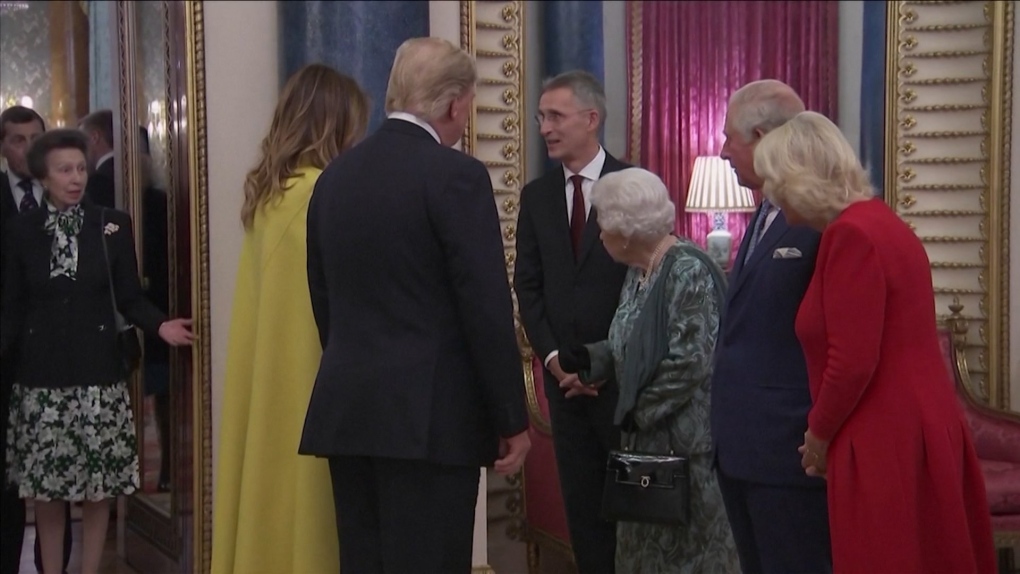 Princess Anne was caught on camera shrugging at Queen Elizabeth II as she gestured for the princess to meet U.S. President Donald Trump. (Royal Pool via CNN)

In a video filmed at Buckingham Palace's NATO reception on Tuesday evening, the Queen -- along with Prince Charles and Camilla, the Duchess of Cornwall -- is seen shaking hands with Trump and his wife Melania.

The 93-year-old monarch then looks over, apparently to check which world leader she is due to receive next, before noticing her daughter standing in the background by the door.

Queen Elizabeth says something inaudible towards Anne in the distance, before the Princess Royal shrugs and can be heard replying: "It's just me," before adding: "and this lot," as the group around the Queen chuckle.

According to Britain's PA Media news agency, Princess Anne was pointing to members of the royal household, including the Deputy Master of the Household, Lt. Col. Anthony Charles Richards, and William Peel, the Lord Chamberlain.

It wasn't long before "Princess Anne" was the top trend on Twitter on Tuesday.

Some social media users suggested that the Queen was "scolding" Anne for not greeting the president, but only Charles and Camilla were supposed to be part of the official welcoming party.

CNN has reached out to Buckingham Palace for clarification on the events in the video but had not heard a response by time of publication.

Princess Anne was also caught on camera alongside world leaders who were appearing to joke about Trump at the event in London last night.

The 25-second clip begins with Johnson asking Macron why he was late.

"Is that why you were late?" Johnson asked, before Macron nodded and Trudeau replied: "He was late because he takes a ... 40-minute press conference at the top."

"You just watched his team's jaws drop to the floor," Trudeau also appears to say at one point, though it's not clear which team he was referring to.

Microphones could only pick up snippets of the conversation at the reception, which the press was given limited access to; none of the leaders seemed to be aware that the conversation was being recorded. They were, however, talking openly and loudly enough to be heard by others.

Trudeau, admitted Wednesday that he and other world leaders were talking about the U.S. President. "Last night I made reference to the fact that there was an unscheduled press conference before my meeting with President Trump. I was happy to be part of it but it was certainly notable," Trudeau said during a Wednesday press conference.