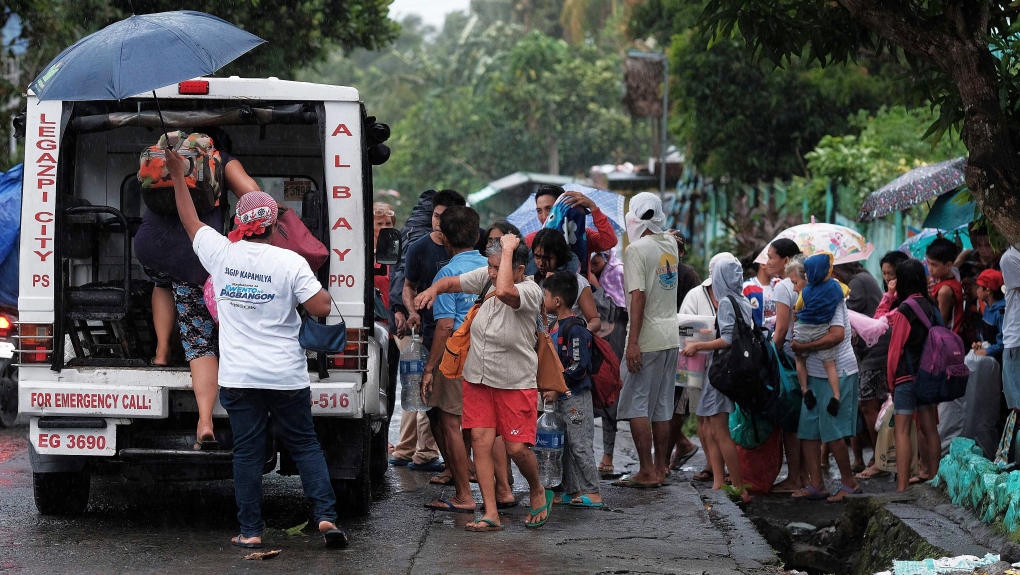 Residents evacuate their area in preparation for the coming of Typhoon Kammuri in Legazpi, Albay province, southeast of Manila, Philippines on Monday Dec. 2, 2109. (AP Photo)

MANILA, PHILIPPINES -- A powerful typhoon was blowing across the Philippines on Tuesday after slamming ashore overnight in an eastern province, damaging houses and an airport and knocking out power after tens of thousands of people fled for safer ground.

Typhoon Kammuri blew into Gubat town in Sorsogon province before midnight then barrelled westward through Quezon province Tuesday morning, ripping off roofs, knocking out power and flooding low-lying villages. It had maximum sustained winds of 155 kilometres (96 miles) per hour and gusts of up to 235 kph (146 miles) as it headed toward a cluster of island provinces and coastal regions lying south of Manila.

There were no immediate reports of deaths or injuries.

Kammuri's pounding rain and wind damaged the airport in Legazpi city in Albay province, collapsing a portion of its ceiling, scattering chairs at the arrival and departure areas and shattering glass panes. Parts of the city were flooded, according to local news reports.

Manila's international airport was closing during the storm's peak, expected at midday to afternoon in the capital region, before the typhoon blows out to sea later in the day.

Officials warned of storm surges and prolonged heavy rain. More than 100,000 residents evacuated before the typhoon made landfall, abandoning homes in coastal and low-lying areas prone to flash floods and landslides, the Office of Civil Defence said.

The coast guard suspended sea travel in the northeast, stranding more than 6,000 travellers along with thousands of cargo ships and smaller watercraft in the archipelago nation.

The Philippines cancelled a tennis match in the Southeast Asian Games after rains drenched an outdoor court. Organizers said wind surfing competitions have also been postponed and other events would be delayed if needed for safety but there was no plan to extend the 11-day games which opened Saturday.

Albay province is home to the Mount Mayon volcano, which is famous for its near-perfect cone and has erupted about 50 times in the last 500 years. Its last significant eruption was in early 2018 and prompted tens of thousands of people to evacuate nearby villages.

The Philippines is battered by about 20 typhoons and tropical storms each year and has frequent earthquakes and volcanic eruptions, making the archipelago of more than 100 million people one of the world's most disaster-prone nations.