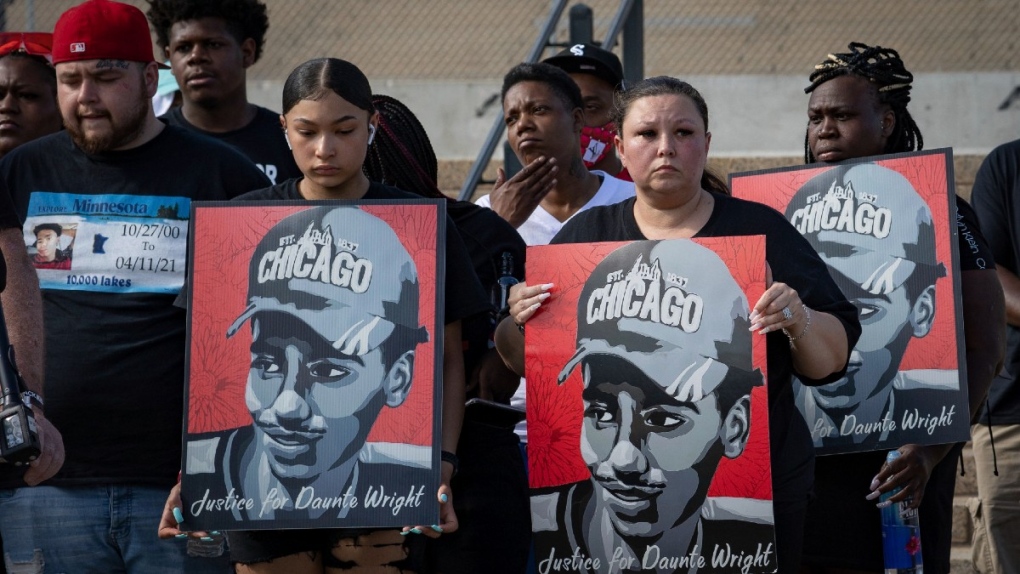 The family of Daunte Wright attends a rally and march in St. Paul, Minn., organized by families who were victims of police brutality for the one year anniversary of George Floyd's death, on May 24, 2021. (Christian Monterrosa / AP)

MINNEAPOLIS -- The suburban Minneapolis police officer who shot Daunte Wright will testify at her trial, her attorney said Tuesday as jury selection began with potential panelists being questioned closely about their attitudes on policing, protests and the Black Lives Matter movement.

One of Kim Potter's attorneys, Paul Engh, told a potential juror that she would hear directly from Potter about the traffic stop that ended in the death of the 20-year-old Black motorist last April. Potter has said she meant to use her Taser on Wright but grabbed her handgun by mistake.

"Officer Potter will testify and tell you what she remembers happened, so you will know not just from the video but from the officers at the scene and Officer Potter herself what was occurring," Engh said. "I think (you) should be quite interested in hearing what she had to say."

Potter is charged with first- and second-degree manslaughter. She shot Wright as he tried to drive away from a traffic stop in Brooklyn Center on April 11 -- a time when former Minneapolis police officer Derek Chauvin's trial was underway for the killing of George Floyd and tensions were high in the area. Wright's death sparked several nights of protests in Brooklyn Center and revived painful memories of the sometimes violent unrest that erupted after Floyd's death in May 2020.

The prospective jurors summoned Tuesday had already responded to questionnaires similar to those used in Chauvin's murder trial . Roughly 200 people were asked what they knew about the Potter case, their impressions of her and Wright, and their views on protests and policing in the Minneapolis area in recent years.

The first juror to be seated Tuesday, a man who said he is a medical editor, said he has a very unfavorable view of the "blue lives matter" slogan that has emerged in recent years. He said he believes it's less about supporting police than about countering the Black Lives Matter movement.

But he also said he opposes the movement to abolish or defund the police.

Also seated Tuesday were a retired special education teacher and a bass player in a rock band who works as an operations manager at Target.

The former teacher said she is a mother of four adult daughters, including one she lost to breast cancer nearly two years ago. Asked if she could be fair, the woman said yes and added: "I'm a retired teacher and one of my students told me one time that I'm strict-fair."

The Target employee was seated despite saying he is somewhat distrustful of police, though he added: "I do recognize that it's a very hard job ΓÇª and it's not something I could do myself."

Among the potential jurors dismissed was a woman who said on her questionnaire that Potter should have known the difference between her gun and her Taser and a man who described Black Lives Matter as "Marxist Communist."

That man also said of Wright: "I think if he would've listened to the (police) directions, he would still be with us."

Jurors' names were being withheld and they were not shown on the livestream of the trial. But efforts to protect their identities slipped at times, with defence attorney Earl Gray appearing to say two prospective jurors' names aloud. Judge Regina Chu warned attorneys to be more careful.

Chu has set aside six days for jury selection, with opening statements Dec. 8.

Potter's defence team can dismiss up to five jurors without giving a reason, compared with three for the prosecution, which is standard in Minnesota courts. In Chauvin's case, where the pretrial publicity was much more intense, the defence was allowed 15 strikes versus nine for prosecutors. Neither side needs to justify such a peremptory strike unless the other side argues it was because of a juror's race, ethnicity or gender.

Potter said she made an innocent mistake when she shot Wright. She and two other officers at the scene, including one she was training, moved to arrest Wright after learning there was a warrant out for him on a gross misdemeanor charge.

As Wright tried to drive off, Potter, who is white, can be heard on her body camera video saying "Taser, Taser Taser" before she fired, followed by "I grabbed the wrong (expletive) gun." The video shows her holding her handgun for about five seconds before firing.

Prosecutors charged Potter, who resigned two days after the shooting, with first- and second-degree manslaughter, saying she was an experienced officer who was trained to know better. The most serious charge requires prosecutors to prove recklessness; the lesser only requires them to prove culpable negligence. Minnesota's sentencing guidelines call for a sentence of just over seven years on the first-degree manslaughter count, and four years for second-degree. But prosecutors have said they'll seek a longer sentence.

The jury pool comes from Hennepin County, which includes Minneapolis and is the state's most populous county. Hennepin is 74% white, 14% Black, 7.5% Asian and 7% Latino, according to census data. Brooklyn Center is one of the most diverse cities in the state, at 46% white, 29% Black, 16% Asian and 15% Latino.

California civil rights attorney John Burris, who won a $2.8 million settlement for the family of a man killed by a transit officer in Oakland who went to prison for grabbing his gun instead of a Taser in 2009, said jurors typically give police the benefit of the doubt. But he said times have changed since Floyd was killed. If the jury selected for Potter is as diverse as Chauvin's jury, which was half people of color, he predicted that they'll take a thoughtful approach.

Mike Brandt, a local attorney, said that if he was on the defence team, he'd rather have the case tried in a rural or suburban county. He said Hennepin tends to be "more on the liberal side," with more people who support holding police accountable.

Alfreda Daniels Juasemai, an activist in Brooklyn Center, said Chauvin's conviction bolstered faith in the courts. She's hoping for a conviction for Potter, too.

"I have lived in this country long enough to know that getting my hopes up is not going to be good for my mental health," said Daniels Juasemai, who emigrated from Liberia in 2006. "I do hope that Kim Potter is guilty of something at this point, but I am trying so hard to not expect anything."