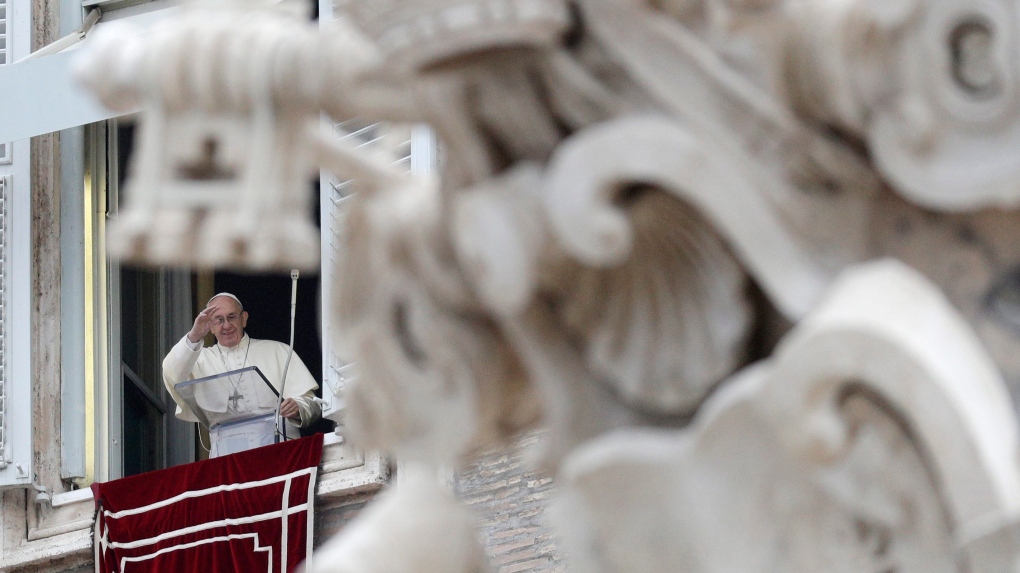 Pope Francis salutes the faithful as he recites the first Angelus prayer of the new year from his studio overlooking St. Peter's square at the Vatican, Monday, Jan. 1, 2018. (AP Photo/Andrew Medichini)

VATICAN CITY -- Pope Francis on Monday recommended jettisoning life's "useless baggage" in 2018, including what he called "empty chatter" and banal consumerism, and focusing instead on building a peaceful and welcoming world, particularly for refugees and migrants.

Francis offered his reflections on paring down non-essentials as he celebrated New Year's Day Mass Monday in St. Peter's Basilica and later greeted some 40,000 people in St. Peter's Square.

His advice included setting aside a moment of silence daily to be with God. Doing so would help "keep our freedom from being corroded by the banality of consumerism, the blare of commercials, the stream of empty words and the overpowering waves of empty chatter and loud shouting," Francis said.

"At the beginning of the year, we too, as Christians on our pilgrim way, feel the need to set out anew from the centre, to leave behind the burdens of the past and to start over from the things that really matter," he said.

The Catholic church designates Jan. 1 as World Peace Day, and in his comments after Mass to the crowd in the square outside the basilica, Francis noted that this year's focus of the day was the search for peace by migrants and refugees.

"I desire, yet again, to speak for these our brothers and sisters who invoke for their future a horizon of peace," Francis said. "For this peace, which is the right of everyone, many of them are willing to risk their life in a voyage that is in the great majority of cases long and dangerous, willing to face hardships and suffering," the pontiff said.

In the past few years, hundreds of thousands of migrants have crossed the Mediterranean from northern Africa in human traffickers' unseaworthy boats, desperate to reach European shores. The pope's foreign travels in 2017 included a voyage to Myanmar and Bangladesh, where the suffering of minority Rohingya Muslims, who have fled from the first country to take refuge in the second, was a central concern of his pilgrimage.

Francis in his appeal Monday said of refugees and migrants: "Let us not extinguish the hope in their hearts. Let us not suffocate their expectations for peace." He called for all to make commitments "to assure the refugees, the migrants, everyone, a future of peace."

The pope then prayed that people "work in this new year with generosity to realize a world that is more united and welcoming."