Pope in Thailand calls for action to protect women, children 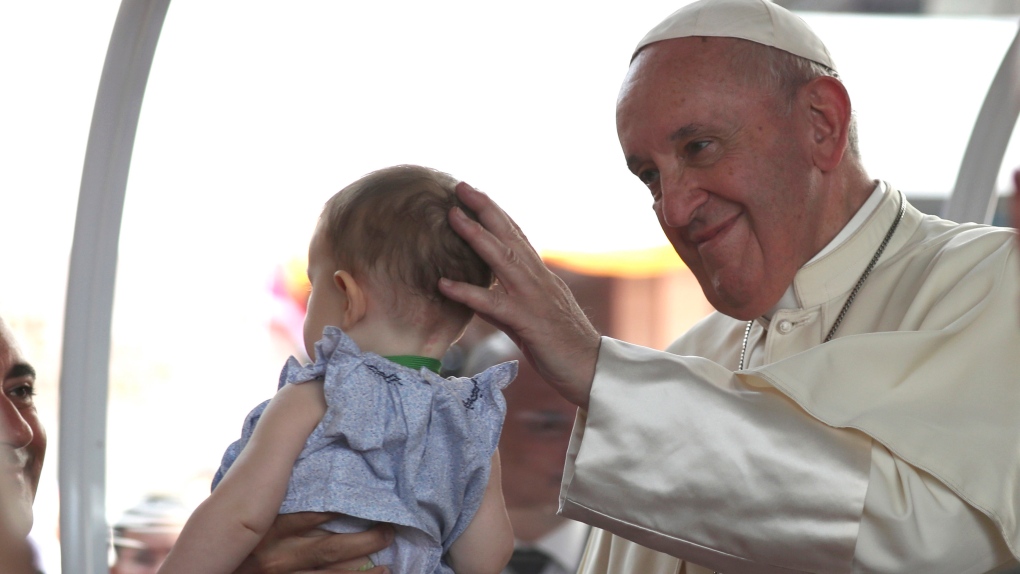 BANGKOK -- Pope Francis urged more efforts to combat the "humiliation" of women and children forced into prostitution as he began a busy visit Thursday to Thailand, where human trafficking and poverty help fuel the sex tourism industry.

During an open-air Mass at Bangkok's national sports stadium, Francis denounced the scourges afflicting the poorest of the region. He urged Thais to not ignore the women and children trafficked for sex or migrants enslaved as fishermen and beggars.

"All of them are part of our family," he told an estimated 60,000 people in the stadium for the evening service. "They are our mothers, our brothers and sisters."

The United Nations considers Thailand a key trafficking destination as well as a source of forced labour and sex workers who are trafficked at home or abroad. The UN drug and crime agency said in a report this year that trafficking for sexual exploitation accounted for 79% of all trafficking cases in Thailand from 2014 to 2017. Of the 1,248 victims detected, 70% were underage girls, the report said, citing data from Thai authorities.

The UN says sex tourism is a factor in fueling the trafficking of more victims, who sometimes are forced, coerced or deceived into sexual exploitation.

Francis' homily was the second time in a day that he referred to the plight of women and children forced into the sex trade. Earlier, Francis praised the Thai government's efforts to fight human trafficking in his first speech delivered at Prime Minister Prayuth Chan-ocha's Government House offices.

But he appealed for a greater international commitment to protect women and children "who are violated and exposed to every form of exploitation, enslavement, violence and abuse."

He called for ways to "uproot this evil and to provide ways to restore their dignity."

"The future of our peoples is linked in large measure to the way we will ensure a dignified future to our children," he said.

The U.S. State Department has faulted Thailand for failing to fully crack down on traffickers who induce young Thai girls into pornography, as well as the exploitation, including via debt bondage, of migrant workers in commercial fishing enterprises.

The Thai government has insisted it has made significant progress and has vowed continued co-operation with international bodies.

Prayuth didn't make any reference to the problem in his remarks to Francis, though he stressed that Thailand had made great strides in promoting human rights.

"We have sought to strengthen the family institution and ensure equal opportunities for all groups in society, especially women and children," he told Francis after a brief private meeting.

Francis has made the fight against human trafficking one of the cornerstones of his papacy, calling it a crime against humanity. Under his leadership, the Vatican has hosted several conferences on eradicating trafficking, featuring women freed from forced prostitution. And during his papacy, an international network of religious sisters, Talitha Kum, has gained greater prominence following decades of quiet efforts to rescue women from traffickers.

In his evening homily, Francis told the faithful that as missionaries, they cannot ignore the plight of those considered "unclean."

"Here I think of children and women who are victims of prostitution and human trafficking, humiliated in their essential human dignity," he said. "I think of young people enslaved by drug addiction ... I think also of exploited fishermen and bypassed beggars."

Francis had a busy schedule on his first full day of activities of his weeklong tour, which will also take him to Japan.

Small crowds of Thais greeted him at each destination, including a few hundred who gathered under a scorching sun to wait for him at the St. Louis Hospital, a private non-profit founded by then-Siam's Catholic archbishop in 1898.

"I intend to follow the teachings that the pope has given, for example kindness, mercy, loving others, having kindness, helping those in need," she said.

Francis also met with Thailand's supreme patriarch of Buddhism at the Wat Rachabophit temple and dutifully removed his shoes before entering the jeweled, intimate room.

Amid the scent of fresh roses inside, Francis committed the Catholic Church to working more with Thailand's majority Buddhists to launch projects to care for the poor and the environment, "our much-abused common home."

There are fewer than 400,000 Catholics among Thailand's 65 million people, yet Francis said they nevertheless have enjoyed freedom in their religious practice. On that note, he gave the patriarch a copy of his much-vaunted human fraternity document calling for interfaith solidarity, which he penned this year with the grand imam of Al-Azhar, the seat of Sunni Muslim learning.

Pranee Sirapraphaphun, from Thailand's northeastern province of Chaiyaphum, travelled 12 hours by bus with over 500 followers from the same diocese to attend Francis' first Mass, which featured Thais from the north where Catholic missionaries have been active for hundreds of years.

"I'm so glad, I will go back to live a good Catholic life with delightfulness, overwhelmed and forgiving," Sirapraphaphun said before Mass got under way.

On Friday, Francis' agenda includes meetings with local Thai clergy, Asian bishops and separately a meeting with leaders of different Christian denominations and other faiths.

Throughout his stay, Francis has been accompanied by Sister Ana Rosa Sivori, his second cousin and an Argentine missionary who has lived in Thailand since the 1960s and is serving as his interpreter.

By all indications, she is also serving as a counsellor. She has joined him in the car heading to his appointments, taking the usual place of the local archbishop to fill him in on details, customs and background. It's a rare case of the pope consulting a woman, since his usual advisers are all men.

And Thursday also provided an even rarer case of a woman making the pope wait for her: After the two cousins met with King Maha Vajiralongkorn and his wife, Sister Ana Rosa remained chatting with the royals at the palace entrance while Francis got into the car. He waited for her patiently until she finished and took her place next to him in the back seat.