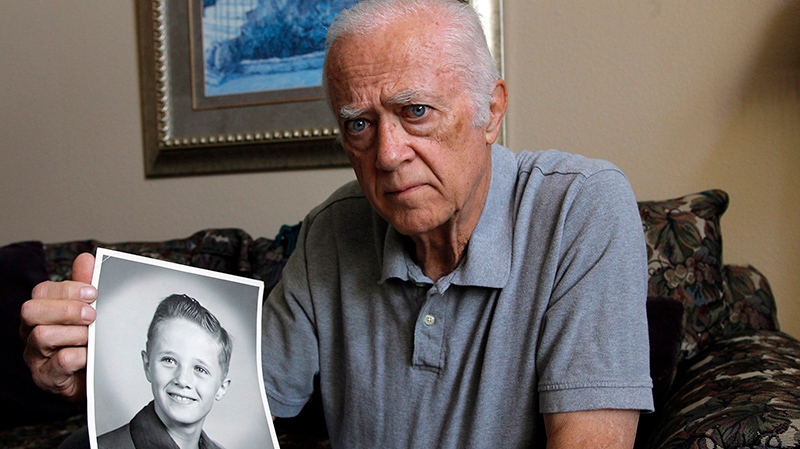 BUENOS AIRES, Argentina -- Activists against abuse by Roman Catholic clergy urged Pope Francis on Tuesday to apologize for what they called the Argentine church's protection of two priests who were eventually convicted of sexually assaulting children.

The U.S.-based Bishop Accountability group cited the case of Father Julio Cesar Grassi, who ran the "Happy Children" foundation and was convicted of pedophilia in 2008, and Father Napoleon Sasso, convicted in 2007 of abusing girls at a soup kitchen in suburban Buenos Aires.

The pope's authorized biographer, Sergio Rubin, told The Associated Press before Jorge Mario Bergoglio was elected pope last week that he had drawn an increasingly tough line on clergy abuse. Bergoglio insisted that accused priests face trial, and imposed a thorough screening process in an attempt to weed out future problems, Rubin said.

In the 2012 book "On Heaven and Earth," in which Bergoglio and Rabbi Abraham Skorka engage in a religious dialogue, the future pope said the church should not ignore the sexual abuse of minors by priests.

"When that happens, we must never turn a blind eye. You cannot be in a position of power and destroy the life of another person," he said, adding that priests guilty of such offences should be stripped of their right to perform priestly duties.

Bergoglio said the church shouldn't try to keep such cases quiet. "I do not believe in taking positions that uphold a certain corporative spirit in order to avoid damaging the image of the institution," he said.

Nobody has presented evidence that Bergoglio was directly involved covering up sex abuse. But a lawyer for the victims, Ernesto Moreau, told the AP that as the top authority for the Argentine church, Bergoglio was ultimately responsible for the treatment of the victims, who have yet to get medical treatment or compensation.

"Bergoglio has been the strongest man in the Argentine church since the beginning of this century," Moreau said, and yet "the leadership of the church has never done anything to remove these people from these places, and neither has it done anything to relieve the pain of the victims."

At the Vatican, Francis will be ultimately responsible for the work of the Congregation for the Doctrine of the Faith, which last year told the world's bishops conferences to come up with comprehensive guidelines to deal with sexual abusive clergy. It gave the bishops a year to draft guidelines to better screen priests, root out potential abusers, educate laity about the problem, and require bishops report suspected abuse to civil authorities where civil reporting laws exist.

As it turns out, Bergoglio has several examples in Argentina to draw from.

Grassi was well known in Buenos Aires for persuading celebrities to donate to his "Happy Children" foundation, which ran orphanages and social outreach programs. Before he was convicted, Grassi praised Bergoglio for "never abandoning him." Now he's free on appeal, thanks in part to a church filing on his behalf.

Sasso, meanwhile, enjoys prison furloughs after serving half of a 17-year sentence for abusing five girls.

Sasso was assigned to the soup kitchen, at a chapel where his bedroom shared the only bathroom, after living in a home for wayward priests where he had been sent after accusations of pedophilia were raised against him in remote San Juan province.

"The bathroom had two doors. The girls would come in through the outside door, and the priest would bring them into his bedroom through the other, sexually abusing the girls," Moreau said. "These were really poor people, who were there for free meals while their parents worked. They found an enormous amount of child pornography in his computer, semen, condoms." It was a medical priest and a nun who discovered that Sasso abused 25 girls aged 3 to 16, but when they informed church officials, they were told to "remain patient," and nothing was done, Moreau said.

Eventually, they sought higher authorities and the case was taken up by the criminal courts, but the mid-level officials who covered it up still have their positions, while the priest and nun were forced to work elsewhere, the lawyer said.

Bergoglio ran Argentina's bishops conference, which must approve inter-diocese priest transfers, at the time when Sasso was assigned to the soup kitchen. He also ran the church when Sasso later became a fugitive and hid out for a year inside church property in the same diocese where the abuse occurred, Moreau said.

Bishop Accountability co-director Anne Doyle said that shows Bergoglio was behind the curve in the Catholic Church's global struggle to deal with sex abuse by its priests, which erupted in 2002 after thousands of cases became public in the United States and around the world.

"We would be alarmed if the Archbishop Bergoglio had done this in the '60s or '70s. That would be sad and disturbing. But the fact that he did this just five years ago, when other bishops in other countries were meeting victims and implementing tough reporting laws, it puts him behind some of his American counterparts, that's for sure," Doyle told the AP.

The group said that to send a message of zero tolerance, Francis should tell the Buenos Aires archdiocese to release the complete files on the Grassi and Sasso cases, publicly identify priests who are "credibly accused" and endorse mandatory reporting by church officials to law enforcement of suspected abuse. The pope also should admit that he was wrong to defend abusive priests, apologize to the victims of Grassi and Sasso, and offer to meet with the victims, the group said.

Doyle noted that The Washington Post reported on these cases just as Francis was being installed as pope in a Vatican ceremony seen around the world Tuesday.

"The victims of these two priests are the very children of God about whom he was speaking in his homily today," she said. "They are the most vulnerable of the poor. We hope that Francis will seize this as a priority and reach out to the victims and rectify his terrible insensitivity to them when he was archbishop."

In the United States, confidential files on hundreds of pedophile priests have been released either through civil litigation, settlements or court order. The contents have revealed how top church officials worked behind the scenes to control the sex abuse scandal and keep it from authorities as well as parishioners.

Similar broad releases of confidential priest files haven't happened in Latin America, where victims are less likely to come forward and even less likely to file a civil claim.

Ramon Luzarraga, an expert on the Catholic Church in Latin America, said justice has come more slowly in Argentina in part because its society has until recently avoided public discussions of sexual humiliation, which was used as a tactic in the "dirty war" waged against leftists by the 1976-83 military dictatorship.

Also, he said, "Argentina's democracy is still comparatively young and, compared to the United States, people are not as acclimated to being outspoken in the face of injustice."

That leaves clergy abuse victims in the U.S. and their supporters to hold the pope to account on questions of priest abuse everywhere, said Luzarraga, who teaches theology at the University of Dayton in Ohio.

The hundreds of confidential priest personnel files that have been made public in the U.S. have bolstered critics because they can see with their own eyes how the American church dealt with abusive priests, he added.

"That is a big difference. Information is power."