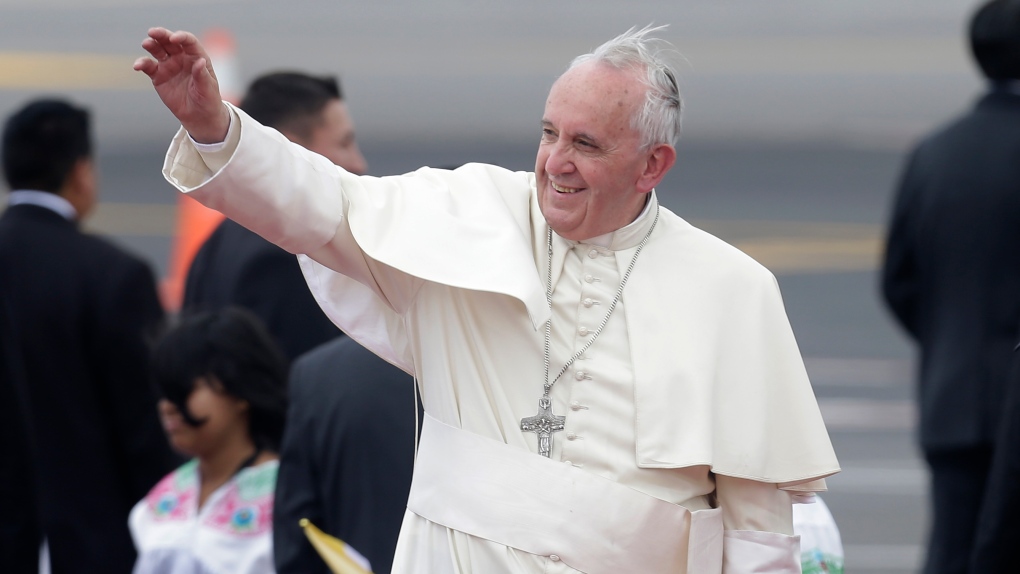 BANGKOK -- Pope Francis will travel to Thailand and Japan in November for a visit expected to highlight his call for complete nuclear disarmament and honour the small Catholic communities in each country.

The Vatican confirmed the Nov. 19-26 trip, and its diplomatic representative in Thailand, Archbishop Paul Tschang In-Nam, announced the Thai stop on Friday. Francis will be in Thailand on Nov. 20-23 before heading to Japan, where government spokesman Yoshihide Suga said the pope would meet with the emperor and Prime Minister Shinzo Abe.

It will be Francis' fourth trip to Asia, where he has already visited South Korea, Sri Lanka, the Philippines, Myanmar and Bangladesh.

During his official visit to Thailand, Francis will preside at religious ceremonies and make pastoral visits to Catholic communities.

"When I heard the news about the papal visit, as a Christian, I'm very delighted because it will be a once-in-a-lifetime moment," said Sister Aranya Kitbunchu, a member of the congregation of the Sacred Heart of Jesus. "We will get to meet him as a real person, not through TV. I believe that his visit will bring peace to the people."

Francis's Japan visit includes Tokyo as well as Hiroshima and Nagasaki, which were hit by U.S. atomic bombs at the end of World War II. A call for a world without nuclear weapons has been Francis' longtime message.

Nagasaki Archbishop Joseph Mitsuaki Takami, who heads the Catholic Bishops' Conference of Japan, expressed gratitude to Francis, noting he and others in the Japanese church have been asking for his visit for years.

He acknowledged that Japan does not have as many Christians as some other nations. But he said Francis had special feelings for Japan, referring to how last year the pope had the Vatican print up thousands of cards of a Nagasaki nuclear bombing child survivor carrying his dead brother on his back. The card had the words "The fruit of war" printed on it.

"I think the pope was laying the groundwork for this visit," the archbishop said in a statement.

Having the pope in Nagasaki will also highlight the legacy of Christian missionaries dating back to the samurai era, including 26 martyrs killed in 1597. It will help honour the so-called "Hidden Christians," who kept the faith alive during decades of persecution.

In a 2017 speech at a disarmament conference at the Vatican, Francis signalled a shift in church teaching about nuclear deterrence, warning that the Cold War-era strategy of deterrence was no longer viable and urging instead complete nuclear disarmament.

"If we . . . take into account the risk of an accidental detonation as a result of error of any kind, the threat of (nuclear weapons') use, as well as their very possession, is to be firmly condemned," he said.

Previous popes including St. John Paul II had called for the abolition of nuclear weapons but said the stockpiling of them could be morally acceptable as a form of deterrence.

Japanese government spokesman Yoshihide Suga said that during his Nov. 23 - 26 visit, Francis will meet with Prime Minister Shinzo Abe and Emperor Naruhito. He said Abe invited Francis to visit Japan when he went to the Vatican in 2014.

"We welcome the visit as a way to gain understanding of the international community about atomic bombing," Suga told reporters.

Japan has not had such a visit since St. John Paul II was the first pope to visit Japan, in 1981. Japan, whose main religions are Buddhism and Shintoism, has about 441,000 Catholics, many in Nagasaki.

Nagasaki, in southwestern Japan, is rich in the legacy of Christian missionaries dating back to the samurai era, including 26 martyrs killed in 1597.

This year is the 350th anniversary of Catholicism's official presence in Thailand, after the Vatican in 1669 established a formal mission at Ayutthaya, the capital of what was then called Siam. The first missionaries, from Portugal, arrived in the 16th century.