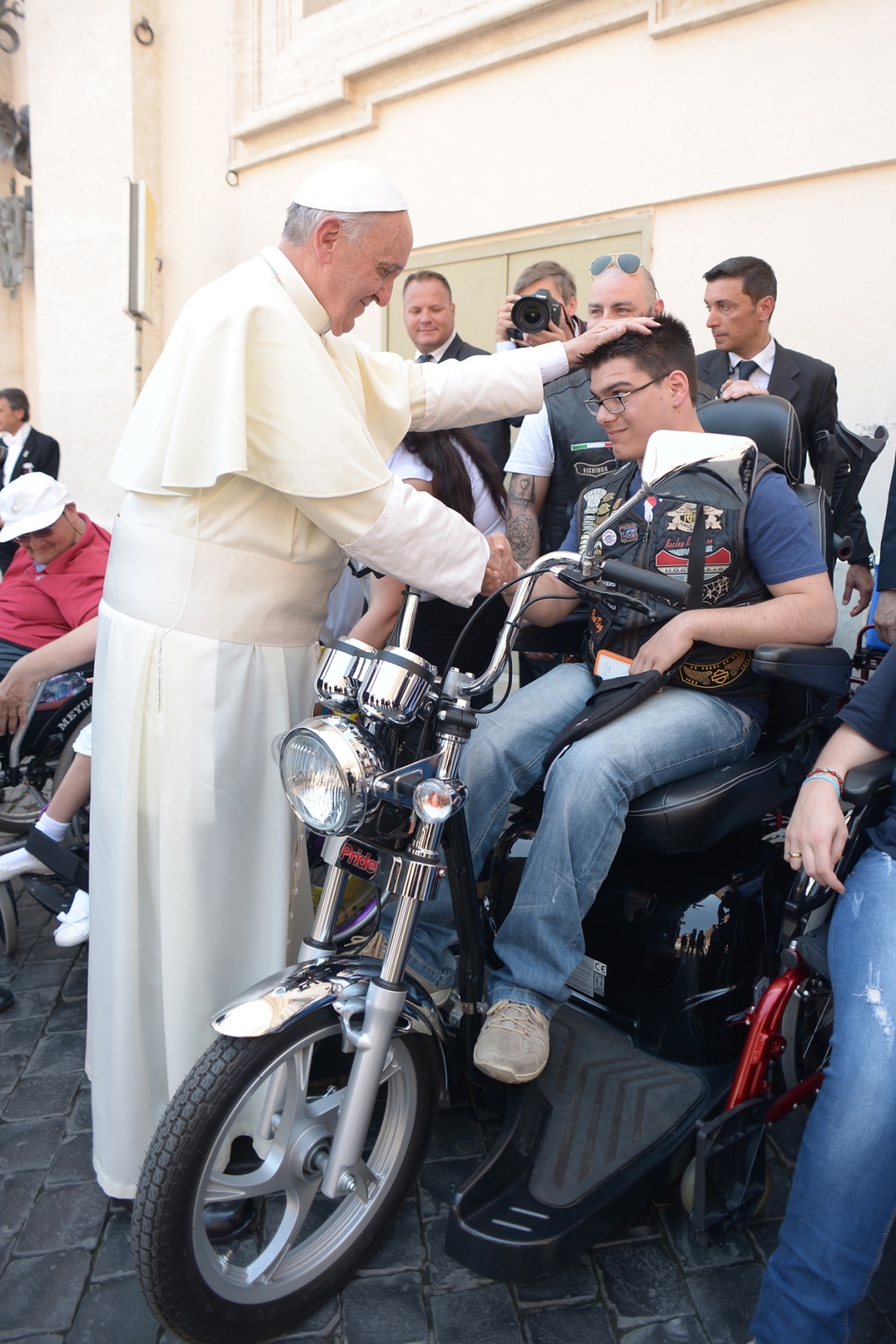 Pope Francis blesses a sick or disabled person, no name given, wearing Harley-Davidson garb at the end of a pro-life Mass in St. Peter's Square, at the Vatican, Sunday, June 16, 2013. (AP / L'Osservatore Romano, ho)

VATICAN CITY -- Biker culture came to the Vatican on Sunday as Pope Francis blessed thousands of Harley-Davidsons and their riders celebrating the manufacturer's 110th anniversary with a loud parade and plenty of leather.

Thundering Harley engines nearly drowned out the Latin recitation of the "Our Father" prayer that accompanied Francis as he greeted the crowd before Mass. Standing in his open-top jeep, Francis drove up the main boulevard leading to St. Peter's Square, blessing the thousands of people in what was a giant Harley parking lot.

Once the service got under way, bikers in their trademark leather Harley vests sat in the square alongside nuns and tens of thousands of faithful Catholics taking part in an unrelated, two-day pro-life rally.

Francis addressed them both afterward, giving a blessing to the "numerous participants" of the Harley gathering.

Tens of thousands of Harley owners from around the world descended on Rome for the four-day anniversary of the American manufacturer.

The main events were Sunday's Vatican blessing and a parade Saturday past the Colosseum and other historic landmarks -- adding colour, traffic and noise to an already colorful day in downtown Rome, thanks to a gay pride march.

Italian daily Corriere della Sera reported that six bikes were involved in a pileup Saturday on the main ring road around the capital, while a Swiss biking couple were killed in a highway crash on Wednesday.

Earlier in the week, Milwaukee, Wisconsin-based, Harley gave Francis two white classic Harleys for the Vatican police force to use.

There was something a bit incongruous about the Harley crowd -- known for its "Freedom" motto, outlaw image and adventuresome spirit -- taking part in a solemn papal Mass to commemorate a 1995 encyclical on the inviolability of human life.

"Evangelium Vitae" is a roadmap of the church's teaching against abortion, euthanasia and murder. Harley's advertising for its 2013 bike collection reads "Live life on your own terms. More than 30 ways to defy the status quo."

The Rev. Federico Lombardi, the Vatican spokesman, noted that there were probably quite a few Catholic riders in the crowd and that regardless, anyone is welcome to a papal Mass.

"I know great people who have big bikes," Lombardi quipped.

In his comments to the pro-life crowd, Francis offered prayers "for every human life, especially the most fragile, defenceless and threatened." But he stayed away from saying anything more polarizing about abortion or contraception.

He then spent a good half-hour after the Mass caressing, kissing and chatting with a few dozen sick or disabled people in the square, including one on a motorcycle wearing Harley garb.