Pope endorses use of force to protect Iraq minorities 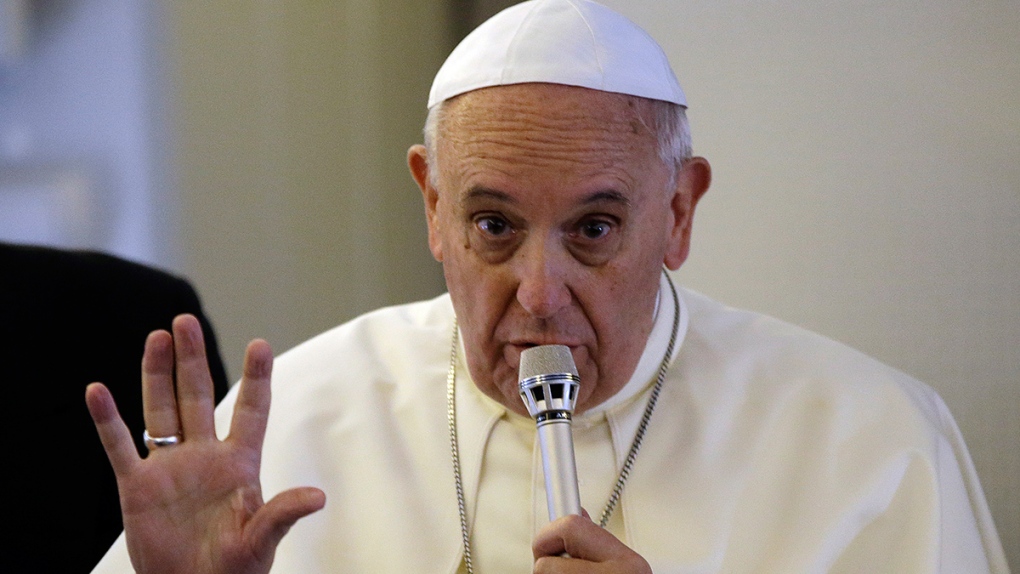 Pope Francis meets the media during an airborne press conference on his journey back to Rome from Seoul, South Korea, Monday, Aug. 18, 2014. (AP / Gregorio Borgia)

Pope Francis on Monday endorsed the use of force to stop Islamic militants from attacking religious minorities in Iraq but said the international community -- and not just one country -- should decide how to intervene.

Francis also said he and his advisers were considering whether he might go to northern Iraq himself to show solidarity with persecuted Christians. But he said he was holding off for now on a decision.

In other comments to journalists returning from South Korea, Francis confirmed he hoped to travel to the United States in September 2015 for a possible three-city tour: to attend a family rally in Philadelphia and to address Congress in Washington and the United Nations in New York. He said a Mexico stop on that trip was possible but not decided yet. He also said he might make one-day visit to Spain next year.

On Iraq, Francis was asked if he approved of the unilateral U.S. airstrikes on militants of the Islamic State who have captured swaths of northern and western Iraq and northeastern Syria and have forced minority Christians and others to either convert to Islam or flee their homes.

"In these cases, where there is an unjust aggression, I can only say that it is licit to stop the unjust aggressor," Francis said. "I underscore the verb 'stop.' I'm not saying 'bomb' or 'make war,' just 'stop.' And the means that can be used to stop them must be evaluated."

But, he said, in history, such "excuses" to stop an unjust aggression have been used by world powers to justify a "war of conquest" in which an entire people have been taken over.

His comments were significant because the Vatican has vehemently opposed any military intervention in recent years, with St. John Paul II actively trying to head off the Iraq war and Francis himself staging a global prayer and fast for peace when the U.S. was threatening airstrikes on Syria last year.

But the Vatican has been increasingly showing support for military intervention in Iraq, given that Christians are being directly targeted because of their faith and that Christian communities which have existed for 2,000 years have been emptied as a result of the extremists' onslaught.

The U.S. began launching airstrikes against Islamic State fighters on Aug. 8, allowing Kurdish forces to fend off an advance on their regional capital of Irbil and to help tens of thousands of religious minorities escape.

Church teaching allows for "just wars," when military force can be justified under certain circumstances. And in recent days, a few Vatican officials have edged increasingly toward acknowledging the Iraq situation fits the bill.

When the Vatican's ambassador to Iraq, Monsignor Giorgio Lingua, was asked about the U.S. airstrikes, he told Vatican Radio that it was unfortunate that the situation had gotten to this point "but it's good when you're able to at the very least remove weapons from these people who have no scruples."

The Vatican's ambassador to the United Nations in Geneva, Archbishop Silvano Tomasi, went further, saying "Maybe military action is necessary at this moment."

Francis sent a personal envoy, Cardinal Fernando Filoni, to northern Iraq last week with an undisclosed amount of money to help people in flight and show the pope's solidarity with those forced to flee their homes.

In other comments Monday:

-- Francis acknowledged that he "must be smarter" about over-extending himself after he was forced to cancel some appointments in the spring due to illness. He admitted the last time he took a vacation away from home was in 1975. "I'm very attached to my home," he said, saying he takes "staycations" instead. "I change my daily rhythm, I sleep more, read more things that I like, listen to music, pray more. And in that way, I rest."

-- Francis said he was hoping for a quick beatification for slain Salvadoran Archbishop Oscar Romero, saying there were no more doctrinal issues blocking the process for one of the heroes of the liberation theology movement in Latin America. Romero's case had been held up for decades in the Vatican's orthodoxy office which, under then-Cardinal Joseph Ratzinger, launched a crackdown on the movement in the 1980s over concerns about its Marxist excesses.

--Francis refused to brand as a failure his high-profile June peace prayer at the Vatican with the Israeli and Palestinian presidents, even though weeks of violence erupted soon thereafter. Francis noted that the prayer initiative came from the two leaders, not him, and was designed to show that while there can be a political path for negotiation, there was also a separate path for prayer. "Now, the smoke of bombs, of war, isn't letting them see the door, but the door has been open since that moment," he said.