Polish president takes step back on abortion amid protests 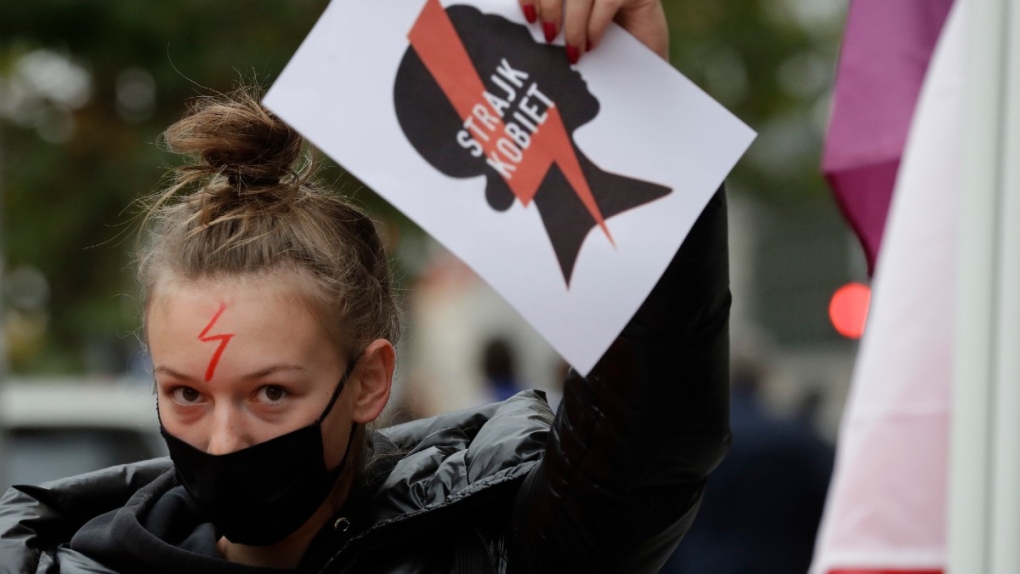 A women's rights activist with a poster of the Women's Strike action protests in Warsaw, Poland, on Oct. 28, 2020. (Czarek Sokolowski / AP)

WARSAW, POLAND -- Poland's prime minister appealed Thursday for a stop, amid a huge spike in the country's coronavirus infections, to a week of angry protests against a high court ruling that tightens already strict abortion laws.

Mateusz Morawiecki said the dispute should be resolved through dialogue, instead of through repeated mass street gatherings that are banned under pandemic restrictions. On Thursday, Poland hit a new record of daily infections that exceeded 20,100 in the nation of 38 million.

"I am asking for these protests to be cancelled because of the epidemic," Morawiecki said, stressing that the health care system is close to its limits.

But women's rights activists confirmed plans for a huge march in Warsaw Friday evening, and more actions and city blockades next week.

Large crowds have protested daily over the past week across the predominantly Catholic country, after a top court ruled that abortion of fetuses with congenital defects is unconstitutional. Police estimate that some 430,000 took part in demonstrations on Wednesday alone.

Earlier Thursday Poland's President Andrzej Duda partially broke ranks with his country's conservative leadership that has pushed for the new abortion restrictions, and said he thinks women should have the right to abortion of fetuses with deadly defects.

"It cannot be that the law requires this kind of heroism from a woman," Duda said in an interview with radio RMF FM. The president said he still favours outlawing abortion in cases of fetuses with non-lethal congenital defects, such as Down syndrome.

Deep divisions that had been brewing for a long time in Poland are now erupting on the streets, with young people heeding a call by women's rights activists to defend their freedoms. The young, even teenage protesters intentionally choose vulgar chants against the right-wing Law and Justice party to emphasize their anger with the ruling team and that there can be no negotiating with them, language analysts say.

Poland's most powerful politician, Law and Justice leader Jaroslaw Kaczynski, had called for his supporters to come out to defend churches after protesters disrupted Masses and spray-painted churches on Sunday.

Many interpreted Kaczynski's call as permission for violence against the protesters.

Opposition Civic Coalition lawmakers will seek a no-confidence vote against Kaczynski, who is deputy prime minister, in parliament, saying he triggered huge social tensions at the difficult time of the pandemic.

"He started a fire and is pouring gasoline on it," said opposition lawmaker Monika Wielichowska.

It was not clear when the vote would be. The ruling party and its two small coalition partners have 10 votes more than the opposition in the lower house.

However, a group guarding a church in the northeastern city of Bialystok held a banner in support of the women but saying their anger should be directed against the government, not churches.

Once the court ruling is published and takes effect, abortion only will be legal when a woman's health or life is in danger or when a pregnancy results from crime like rape or incest.

Duda's comments Thursday were in contrast to his initial reaction last week, when he welcomed the court ruling. He now spoke against abortions of fetuses with Down syndrome, which form the majority of over 1,000 legal terminations performed in Poland each year. Duda called for a new law to distinguish between fatal and non-fatal defects.

"I believe that there should be a regulation which, in case of lethal defects, will unequivocally guarantee the rights on the side of the woman," the president said.

His words have no legal bearing on the court ruling and are not expected to appease protesters.

Kaczynski's comment was that Duda "is the president and has the right" to say so.

also signalled a difference of opinion with Kaczynski on the issue of security, saying police should have the sole responsibility for protecting the streets.