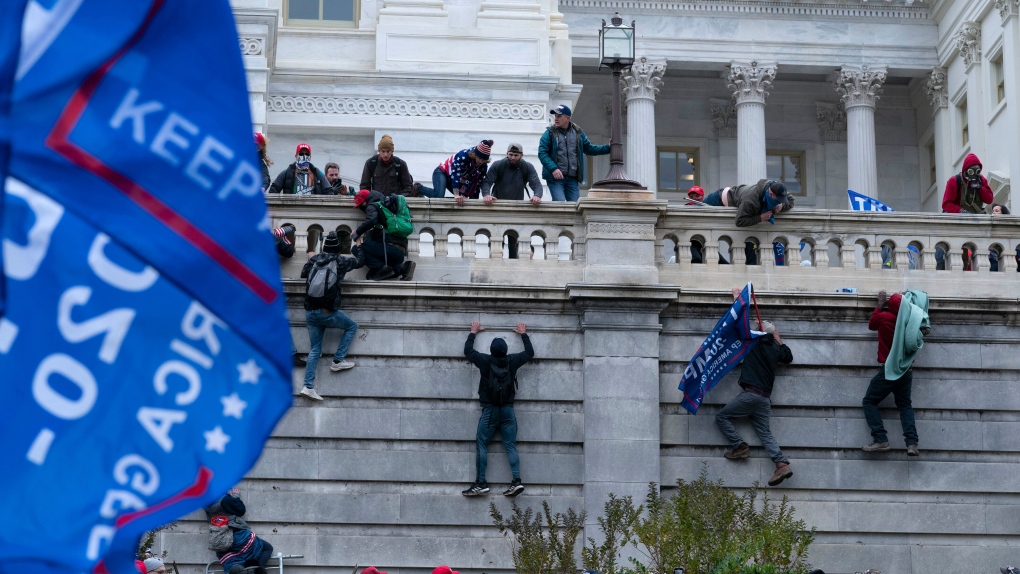 Trump supporters stand on top of a police vehicle, Wednesday, Jan. 6, 2021, at the Capitol in Washington. As Congress prepares to affirm President-elect Joe Biden's victory, thousands of people have gathered to show their support for President Donald Trump and his claims of election fraud. (AP Photo/Julio Cortez)

For two Virginia police officers who posed for a photo during the deadly U.S. Capitol insurrection, the reckoning has been swift and public: They were identified, charged with crimes and arrested.

But for five Seattle officers the outcome is less clear. Their identities still secret, two are on leave and three continue to work while a police watchdog investigates whether their actions in the nation's capital on Jan. 6 crossed the line from protected political speech to lawbreaking.

The contrasting cases highlight the dilemma faced by police departments nationwide as they review the behaviour of dozens of officers who were in Washington the day of the riot by supporters of President Donald Trump. Officials and experts agree that officers who were involved in the melee should be fired and charged for their role.

But what about those officers who attended only the Trump rally before the riot? How does a department balance an officer's free speech rights with the blow to public trust that comes from the attendance of law enforcement at an event with far-right militants and white nationalists who went on to assault the seat of American democracy?

An Associated Press survey of law enforcement agencies nationwide found that at least 31 officers in 12 states are being scrutinized by their supervisors for their behaviour in the District of Columbia or face criminal charges for participating in the riot. Officials are looking into whether the officers violated any laws or policies or participated in the violence while in Washington. A Capitol Police officer died after he was hit in the head with a fire extinguisher as rioters descended on the building and many other officers were injured. A woman was shot to death by Capitol Police and three other people died after medical emergencies during the chaos.

Most of the officers have not been publicly identified; only a few have been charged. Some were identified by online sleuths. Others were reported by their colleagues or turned themselves in.

They come from some of the country's largest cities -- three Los Angeles officers and a sheriff's deputy, for instance -- as well as state agencies and a Pennsylvania police department with nine officers. Among them are an Oklahoma sheriff and New Hampshire police chief who have acknowledged being at the rally, but denied entering the Capitol or breaking the law.

"If they were off-duty, it's totally free speech," said Will Aitchison, a lawyer in Portland, Oregon, who represents law enforcement officers. "People have the right to express their political views regardless of who's standing next to them. You just don't get guilt by association."

Communities will question the integrity of officers who attended the rally along with "individuals who proudly profess racist and divisive viewpoints," she said. "It calls into question whether those officers are interested in engaging in policing in a way that builds trust and legitimacy in all communities, including communities of colour."

In Rocky Mount, a Virginia town of about 1,000, Sgt. Thomas Robertson and Officer Jacob Fracker were suspended without pay and face criminal charges after posting a photo of themselves inside the Capitol during the riot. According to court records, Robertson wrote on social media that the "Left are just mad because we actually attacked the government who is the problem ΓÇª The right IN ONE DAY took the f(asterisk)(asterisk)(asterisk)(asterisk) U.S. Capitol. Keep poking us."

Attempts to contact the pair were unsuccessful and court records do not list lawyers. Leaders in Rocky Mount declined to be interviewed. In a statement, they said the events at the Capitol were tragic.

"We stand with and add our support to those who have denounced the violence and illegal activity that took place that day," said Police Chief Ken Criner, Capt. Mark Lovern and Town Manager James Ervin. "Our town and our police department absolutely does not condone illegal or unethical behaviour by anyone, including our officers and staff."

On the other side of the country, five Seattle officers are under investigation by the city's Office of Police Accountability. Two officers posted photos of themselves on social media while in the district and officials are investigating to determine where they were and what they were doing. Three others told supervisors that they went to Washington for the events and are being investigated for what they did while there.

Seattle Police Chief Adrian Diaz said his department supports officers' freedom of speech and that those who were in the nation's capital will be fired if they "were directly involved in the insurrection at the U.S. Capitol."

But police leaders need to evaluate more than just clear criminal behaviour, according to Chuck Wexler, executive director of the Police Executive Research Forum, a policing research and policy group. They must also consider how their actions affect a department's credibility, he said.

Officers' First Amendment rights "don't extend to expressing words that may be violent or maybe express some prejudice," Wexler said, "because that's going to reflect on what they do when they're working, when they're testifying in court."

Through the summer and fall, Seattle police -- along with officers elsewhere -- came under criticism for their handling of mass protests against police brutality following the death of George Floyd. The city received more than 19,000 complaints against officers, most for excessive use of force and improper use of pepper spray.

Andrew Myerberg, director of the Seattle Office of Police Accountability, said none of the officers now under investigation were involved in those cases.

But Sakara Remmu, cofounder of Black Lives Matter Seattle/King County, said the officers should be fired regardless. Their public declarations of solidarity with Trump fosters not just community distrust, but terror of the entire department, she said.

"It absolutely does matter when the decorum of racial peace cracks and racial hatred comes through, because we already have a documented history and legacy of what that means in this country," Remmu said.

In Houston, the police chief decried an officer who resigned and was later charged in the riot. A lawyer for Officer Tam Pham said the 18-year veteran of the force "very much regrets" being at the rally and was "deeply remorseful."

But many chiefs have said their officers committed no crimes.

"The Arkansas State Police respects the rights and freedom of an employee to use their leave time as the employee may choose," department spokesman Bill Sadler said of two officers who attended the Trump rally.

Malik Aziz, the former chair and executive director of the National Black Police Association, compared condemning all officers who were in Washington to tarring all the protesters who took to streets after the killing of George Floyd with the violent and destructive acts of some.

A major with the Dallas Police Department, Aziz said police acting privately have the same rights as other Americans, but that knowingly going to a bigoted event should be disqualifying for an officer.

"There's no place in law enforcement for that individual," Aziz said.