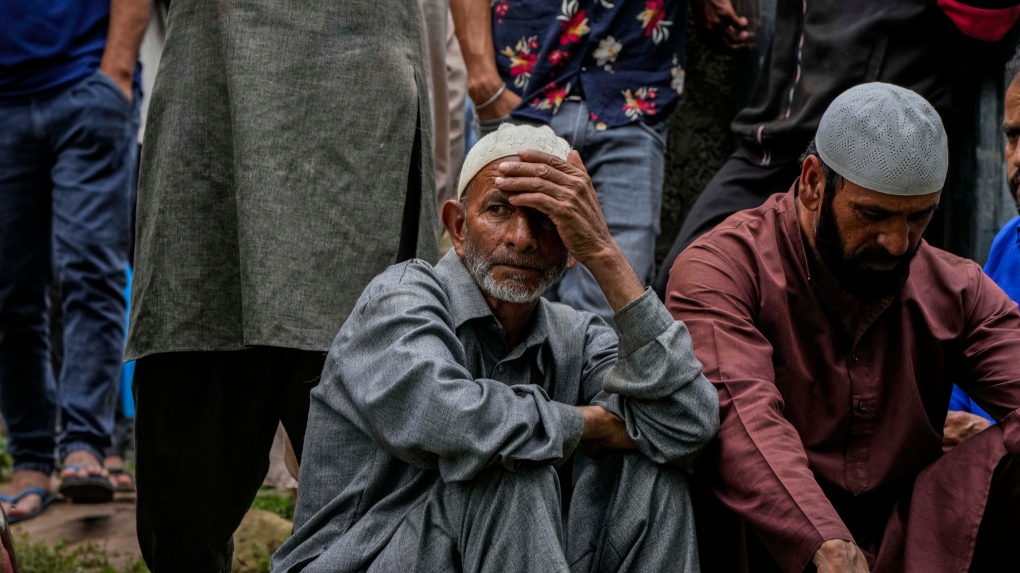 Kashmiri muslim villagers sit outside the house of Sunil Kumar, a Kashmiri Hindu man locally known as Pandit, outside his home at Chotigam village, some 62 kilometers south of Srinagar, Indian controlled Kashmir, Tuesday, Aug. 16, 2022. Pandit was shot dead by suspected rebels at an apple orchard on Tuesday morning, while his brother was injured in the attack, officials said. (AP Photo/Mukhtar Khan)
SRINAGAR, India -

Assailants killed a Kashmiri Hindu man and wounded his brother in a shooting Tuesday that police blamed on militants fighting Indian rule in the disputed region.

Police said suspected militants fired at two Kashmiri Hindu brothers inside an apple orchard in the Shopian district in the south of Indian-controlled Kashmir. Both were taken to a hospital with critical gunshot wounds where one died, police said in a statement.

Soldiers and police cordoned off the area and began searching for the attackers.

Kashmir has witnessed a spate of targeted killings in recent months. Several Hindus, including immigrant workers from Indian States, have been killed. Police say the killings – including that of Muslim village councillors, police officers and civilians – have been carried out by anti-India rebels.

The spate of killings this year come as Indian troops have continued counter-insurgency operations across the region amid a clampdown on dissent and press freedom, which critics have likened to a militaristic policy.

Kashmir is divided between India and Pakistan and claimed by both in its entirety.

Rebels in the Indian-controlled portion of Kashmir have been fighting New Delhi's rule since 1989. Most Muslim Kashmiris support the rebel goal of uniting the territory, either under Pakistani rule or as an independent country.

India insists the Kashmir militancy is Pakistan-sponsored terrorism. Pakistan denies the charge, and most Kashmiris consider it a legitimate freedom struggle. Tens of thousands of civilians, rebels and government forces have been killed in the conflict.

Kashmir's minority Hindus have long fretted over their place in the disputed region. Most of an estimated 200,000 of them fled Kashmir in the 1990s when an armed rebellion against Indian rule began. Some 4,000 of them later returned after 2010 as part of a government resettlement plan that provided them with jobs and housing.

The recent killings, however, have heightened their fears.

In May, after the killing of a Hindu revenue clerk, hundreds of them organized for the first time simultaneous street protests in the region and demanded the government relocate them to safer areas.

What each province, territory is doing on National Day for Truth and Reconciliation

Friday is the second annual National Day for Truth and Reconciliation, also known as Orange Shirt Day. The federal government made Sept. 30 a statutory holiday for its workers and federally regulated workplaces last year.

The national chief of the Assembly of First Nations says today's National Day of Truth and Reconciliation is about the survivors of Canada's residential schools and the children who died in them and never made it home.

Indigenous leaders in Quebec are lamenting the fact that priorities for their communities have been largely ignored during the provincial election campaign.

A revived Hurricane Ian set its sights on South Carolina's coast Friday and the historic city of Charleston, with forecasters predicting a storm surge and floods after the megastorm caused catastrophic damage in Florida and left people trapped in their homes.

Russian President Vladimir Putin signed treaties Friday to annex occupied areas of Ukraine and said he would use 'all available means' to protect the territory that Ukrainian and Western officials said Russia was claiming illegitimately and in violation of international law.

'Justinflation' can't be said in the House of Commons, but MPs are trying anyway

The Conservatives' cheeky term for inflation under the Liberals has got some MPs into trouble in the House of Commons, where saying 'Justinflation' has been deemed verboten.