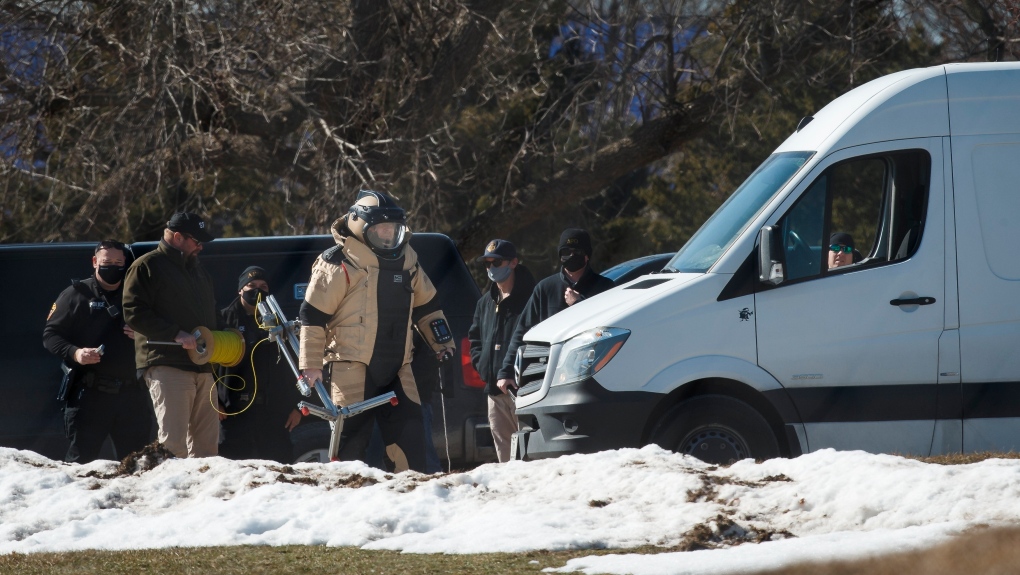 Ankeny Police investigate the scene at the Lakeside Center where a suspicious package was found on Tuesday, March 2, 2021, in Ankeny, Iowa. Technicians safely detonated the device, and the center was reopened. Police later confirmed that the device was a pipe bomb. (Brian Powers/The Des Moines Register via AP)

ANKENY, IOWA -- The discovery of a live pipe bomb at a central Iowa polling place as voters were casting ballots in a special election forced an evacuation of the building, police said.

Officers called to the Lakeside Center in Ankeny around 9:30 a.m. Tuesday found a device that looked like a pipe bomb in grass near the centre. Police later confirmed in a news release that the device was a pipe bomb.

The banquet hall was being used as a polling place for an Ankeny school district special election. Police evacuated the building, and the State Fire Marshal and agents with the FBI and the Bureau of Alcohol, Tobacco, Firearms and Explosives were called in. Technicians safely detonated the device, and the centre was reopened around 12:30 p.m. - about three hours after the device was discovered, police said. No one was injured.

Polk County Auditor Jamie Fitzgerald described the device as a metal piece with two end caps, and said in a Twitter post that a couple walking their dog Tuesday morning had discovered the device.

“I want to also add that there is no way of knowing how long this device had been at the Lakeside Center,” Fitzgerald said in a tweet, saying officials don't know whether the pipe bomb was related to the election.

Fitzgerald and police said other polling places in Ankeny were checked an no other bombs or suspicious devices were found.

An investigation into who left the device is continuing, police said.